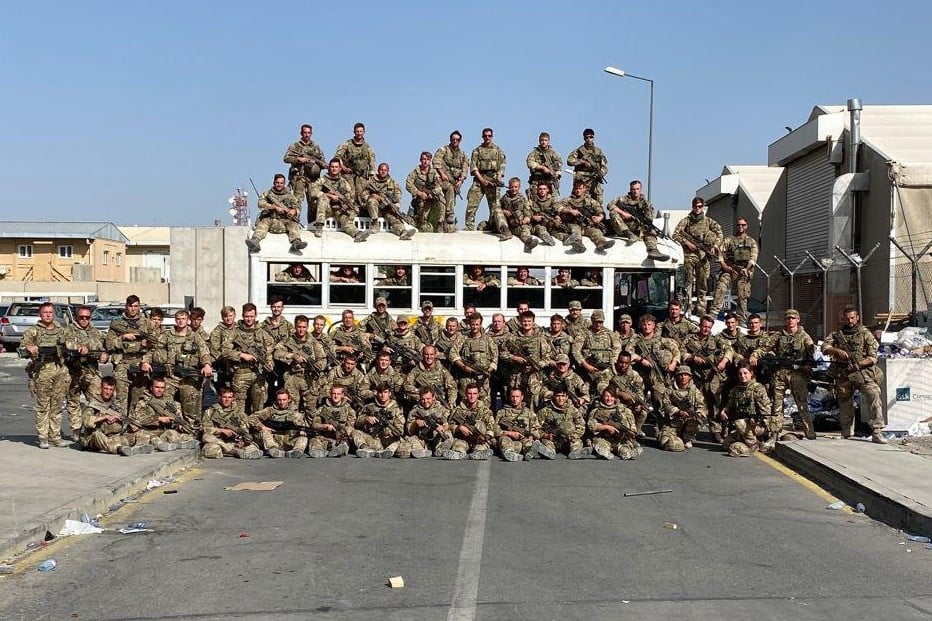 The Second Battalion The Yorkshire Regiment in Afghanistan

Cyprus-based troops from the Second Battalion The Yorkshire Regiment have been reflecting on the part they played in the evacuation of more than 12,000 British nationals and entitled Afghans out of Afghanistan last month.

Approximately 100 personnel from BFC’s Regional Standby Battalion were sent to Kabul Airport to support the UK’s efforts to get entitled individuals out safely and despite the desperate scenes they were greeted with upon their arrival, Commanding Officer, Lieutenant Colonel James Ashworth, revealed it did not faze them when carrying out their orders.

He explained: “2 YORKS deployed a company of soldiers to the international airport in Kabul to reinforce the efforts of 16 Brigade and what they were asked to do in the airport itself was really varied.

“They did everything from securing the airport itself, to moving evacuees out from the edges of the airport, through to the processing and onto the aircraft and everything in between, including response to medical issues.”

The CO also didn’t hesitate when asked what had impressed him most about his troops’ response to the task at hand.

“For me, the most enduring factor was the compassion the soldiers had throughout,” he said. “I think the circumstances and the situation on the ground, the world had seen how desperate it was and for our soldiers to stay calm, keep their cool and remain compassionate throughout, was one of the most impressive aspects.”

WO2 Ross Willis, from A-Company, described the scene as he arrived on the ground: “It was all pretty loose, you could see people who were displaced and we were then picked up by the 16 Brigade Sergeant Major who said ‘standby, you are going to see some stuff’.

“There were people laid out, women, kids, people injured, people getting stretchered off, covered in bandages and for the young private soldiers, it is something they are not used to, because they are not dealing with soldiers or the enemy, it was just people, and you could see in their faces they needed to get past that.”

And from a personal perspective, he also revealed that he had to come to terms with his new ‘working relationship’ with the Taliban.

He explained: “It was difficult. I think for the younger lads it was a bit easier. On previous tours, my relationship with the Taliban was always clearly defined and it was harder for me to get my head around that than it was for the young soldiers.

“It was easier for them because they didn’t really understand that there was this dynamic that existed before. Sometimes I would look at them (the Taliban) and I would know what we used to do and how they were the enemy, and we did have a scrap with them every now and again and it was weird for me and that was something I had to get on with.”

Private Jake Howarth, who undertook a number of duties whilst in the airport, including what was dubbed a ‘guardian angel’ role, which saw him provide food and water for the evacuees and at times, entertainment for the confused children, spoke openly about his feelings prior to landing in Kabul and his reaction to the scene he was greeted with.

“I always wanted to go to Afghanistan, so it was an opportunity,” he said. “I was quite nervous on the flight over to Kabul because when you watch the news, it looked bad and the fact that we were called up at short notice, you do wonder what is going on and there is definitely a fear factor.

“You consider things like what the country will be like, what would it smell like, because you have heard stories, what will I see, will I come back from this?

“When we landed, the first thing we heard were gunshots, there was a lot of barbed wire and inside those barbed wire areas were civilians waiting to get on their flights but at the time we didn’t know what we were looking at.

“I think we were all quite shocked when we got there because we didn’t really know what was going on at first. Was it the Taliban firing, or coalition forces? But you are given your brief and then you have to get on with the job.”

And in getting on with the job, Private Howarth had to undertake a role perhaps not always associated with an infantry soldier.

“Where you could, given the language barrier, you had to always reassure them (the evacuees) that when there was gunfire going off, they were safe. Some of them were quite jumpy.

“Also, when they asked questions about when they would be leaving, you had to provide that reassurance again that it would be soon and that they would get on that flight because many of them were very scared.

“Thinking about it now, it was very sad, I had never seen that side of life before. People jumping over fences because they were desperate to get away. Seeing injured children, scared and them not knowing what was going on, it was all so sad to see.”

Captain Dave Kellett, who had only been in Kabul on a previous tour last year, said he was faced with a very different scene to the one he left: “I had been to Kabul airport only the year before, so having seen what it was like when I left, to what I arrived you to, it was drastically different, it was very busy.”

He was also quick to pay tribute to the soldiers he deployed with this time around: “The junior soldiers really stepped up to the mark. For a lot of them it was the first time they had deployed, so it was a difficult process for them to go through, but they took it on really well.

“The soldiers were a credit to themselves, with limited time to get ready on the ground, they stepped straight into it.”