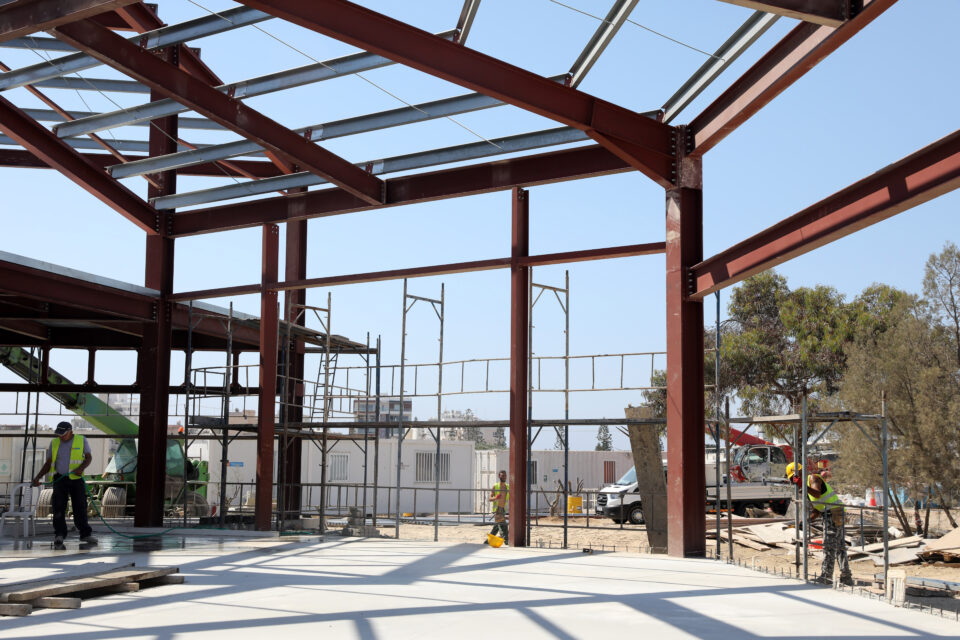 The construction site of the Cyprus Centre for Land, Open Seas and Port Security

With only a few months before it opens its doors, the CYCLOPS (Cyprus Centre for Land, Open Seas and Port Security) currently under construction in Larnaca, aims to become a regional, Cypriot project which will provide education and know-how to EU, third countries as well as Eastern Mediterranean partners.

At the same time, it will expand the sectors of education, according to the needs of the Republic of Cyprus and the EU in the fields of security while clearly being a Cypriot project. The US is funding the project, estimated at €5 million.

The Cyprus News Agency recently visited the site where the centre is under construction. It is expected to operate in January 2022, a year after construction commenced.

According to information provided by the Ministry of Foreign Affairs, delays due to the Covid-19 were overcome and now the project is on a good track. The agreement-framework took two and a half years to complete. The project is “completely Cypriot, which means the Republic of Cyprus decides for everything involving CYCLOPS”, CNA was told.

It enjoys great support by various Cyprus partners, primarily the United States which finances the construction and equipment and will offer their know-how and education in various fields. The agreement for CYCLOPS was signed in September 2020 by then-US Secretary of State Mike Pompeo during his visit to Cyprus.

The aim and target is to expand the sectors of training based on two principles, the needs of the Republic of Cyprus in security and also the security needs of the EU. The Ministry of Foreign Affairs is the umbrella under which the state mechanism can fully take advantage of CYCLOPS to develop education.

Analysing the security issue for the Republic of Cyprus, the Foreign Ministry notes that security concerns every citizen, every government official, every traveler, etc. “This is the trend we see in the field of security in the European framework, where many sectors are neither absolutely civilian nor whatsoever military.”

Secondly, “there is also the needs of the EU when it comes to security, and the main idea and direction for CYCLOPS is to develop into a regional and Cypriot project, providing education, know-how to the EU and third countries and to friendly countries in Eastern Mediterranean.”

The final aim is for trainers to be Cypriots. That is why CYCLOPS will provide the programme “Train the Trainers” where those who have the capabilities to become trainers will be able to take over. For Cyprus, a small society with a specific human resource, the possibility to transfer know-how and convey methods of good practice to the wider public to handle various challenges, is a large upgrade of our capabilities to provide security to Cypriots and of course our EU partners,” the ministry information said.

Interest in CYCLOPS has been expressed by various countries. There are contacts with a number of countries in the region that have expressed interest for cooperation and participation in various departments of CYCLOPS such as Egypt, the UAE, Jordan, Israel, Oman.

The cybersecurity sector is an area where CYCLOPS has already organised two seminars through videoconference on areas such as specialized analyses and investigation on the internet to tackle crime, terrorism through the dark web which is a field with specialised know-how.

“We view the issue of security in a broad way,” CNA was told, noting that for the Foreign Ministry, the aim is to prove that the “centre will be a site where horizontal challenges are faced.”

In other words, the issue of Cybersecurity is an issue that concerns everyone. Therefore, all these factors at some stage must have a common denominator to allow for a common dialogue, common education and this is what CYCLOPS aims to offer.

At CYCLOPS, a dialogue between the government, non-government and private sector can develop, so we “can face the multidimensional provocations, the hybrid challenges before us”.

Therefore, we aim to involve municipalities in order for citizens to have a better understanding of what a hybrid threat means, how one can be vulnerable to various ‘attacks’ that bank accounts or themselves might be subjected to.

Another sector that is very significant for a state like Cyprus, is maritime and port security. Here, the Deputy Ministry of Shipping can be involved, according to the FM.

Another sector concerns border control, customs control which is very significant for Cyprus. We have a “huge interest in preventing the proliferation of various technologies, dual-use materials and hybrid threats” the MFA told CNA.

A third sector that interests CYCLOPS is its contribution to innovation and beyond. Apart from the dialogue, it aims to create synergies and to have products in the areas of security, cybersecurity, physical security, fire extinguishing, etc.

CYCLOPS will not operate as a start-up incubator but it will be an area where there can be a synergy between the private and state sectors.

CYCLOPS is under the Ministry of Foreign Affairs but for it to operate, needs the involvement of other ministries and deputy ministries that are considered stakeholders in the project.

How discrimination affects the workplace