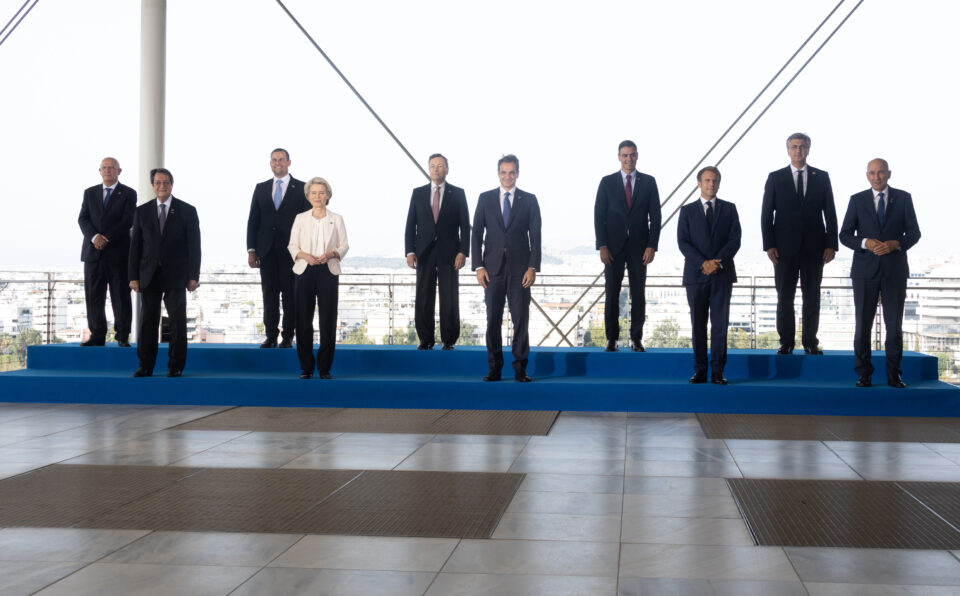 Family photo of state leaders at the Athens summit (PIO)

Leaders of the EU’s bloc of nine southern European members on Friday demanded urgent global action to combat a worsening climate crisis and build a sustainable future for the Mediterranean region.

In the Athens Declaration on climate change and the environment in the Mediterranean, the nine countries announced they commit to take actions to increase the quantity, quality and resilience of forests, including to contribute to the pledge of planting at least 3 billion additional trees in the EU by 2030.

The Mediterranean was now suffering “unprecedented ecological damage and response capabilities are being stretched to the limit”, they said in a joint statement after their meeting, joined by EU Commission head Ursula von der Leyen.

“Such vulnerability is going to increase due to the accelerating impacts from climate change in the region leading to losses in welfare in terms of economic impacts due to climate change,” the statement said. In this context, it said, these impacts and climate cohesion need to be considered in the development and implementation of the climate and energy policies of the EU and be addressed and recognised appropriately “to ensure that our countries are not at disadvantage in the context of a changing climate.”

The leaders also said they stand united in their strong conviction that “urgent and ambitious global action – at national, regional and local levels – is now, more than ever, necessary” to tackle the escalating climate and environmental crisis and create a safe, secure prosperous, fair and sustainable future for their societies in the 21st century driven by circular economy patterns.

The group reiterate their firm commitment to the implementation of the Paris Agreement and to the target of limiting the global temperature increase to 1.5°C above preindustrial levels. They also commit towards reaching climate neutrality by 2050, in line with the European Climate Law and the EU target of reducing net greenhouse gas emissions by at least 55 per cent by 2030 from 1990 levels.

They also commit to take actions to widen and better manage the EU network of protected areas, contributing to the objective of protecting 30 per cent of the EU land and sea by 2030, one third of which under strict protection, through collective action by all countries participating in this joint effort.

EU scientists have said the Mediterranean has become a “wildfire hotspot” as human-induced climate change is making heatwaves more likely and more severe.

Greece was hit by its most intense blazes on record amid an intense heatwave this summer and in southern Italy fires ravaged swathes of land, while deadly flooding swept western Europe.

“It’s the strongest proof that the environmental crisis affects us all,” he said. “And as there is a common risk, our defences should be common as well.”

In Greece, hundreds of businesses and houses have been burnt to the ground, with the fires overwhelming national civil protection and firefighting responses and forcing Greece to ask assistance from other EU countries.

The Mediterranean countries agreed to boost cooperation among themselves in planning and prevention and called on the EU to strengthen its civil protection mechanisms to help better protect citizens and the environment against “increasingly severe and complex disasters”.