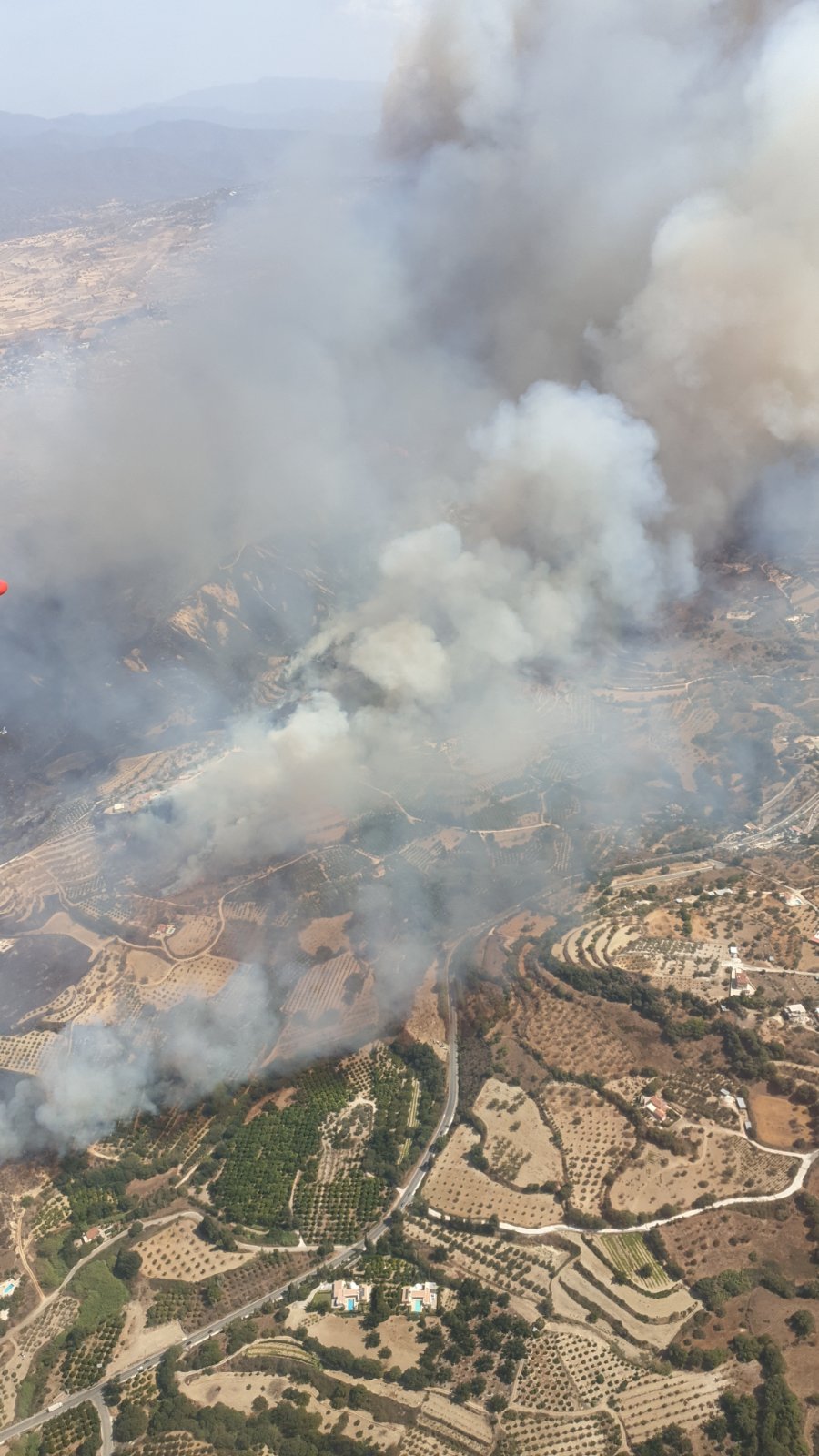 The massive fire in Paphos villages of Yiolou and Simou which saw some residents evacuated was put under control by Sunday evening, fire services spokesman Andreas Kettis said.

The blaze, which was raging on two fronts in difficult to reach areas between Yiolou – Miliou, as well as Simou – Drymou, burned a total of eight square kilometres of dry vegetation, wild shrub and trees.

Additionally, the fire damaged livestock farms, agricultural areas and the outside areas of some people’s homes mostly in Yiolou and Drymou communities, along with equipment in the vicinity.

The last of the flames are being extinguished and firefighters were preparing for any possible resurgences, Kettis said.

Residents living in Thrinia village, Paphos were evacuated as a precautionary measure, as fires continued to rage on two fronts in difficult to reach areas between Yiolou – Miliou, as well as Simou – Drymou.

The fire began at around 11:50am and appeared quickly escalated, with more firefighting vehicles and aircraft brought in to fight the flames.

Off-duty firefighters were also called in to help tackle the blaze.

The decision to evacuate residents was taken as a precautionary measure, following an evaluation from the fire services, Kettis said on Twitter. Both the police and civil defence carried out the evacuation.

A total of 14 firefighting vehicles were on site, nine from Paphos firefighting service, four from the forestry department and one from the game fund, which was also providing a portable fire extinguisher. The district office had provided land moving equipment.

Kettis later said more firefighting vehicles from across the country arrived to the scene to aid in the efforts. Nicosia, Limassol and Larnaca fire stations sent in more help, as had Emak, the fire services disaster response unit.

Additionally, 10 aircraft were operating as part of the effort, seven of which were attempting to obliterate the flames and one from the national guard to coordinate the efforts. Two belonged to the British bases which were aiding in the firefighting effort.

Flames burned dry vegetation and wild shrub however almond trees have also been burned. The cause of the flames is to be examined at a later stage.

The flames have affected the communities of Simou, southwest of Yiolou and outside the residences of Drymou, however the flames in the area were put under control before any homes were affected.

Fighting the blaze is extremely difficult as the terrain is not easily accessible, particularly south of Simou. Papagiou said many fire trucks cannot get close to the fire as the land is too difficult to get through with many bushes.

A fire had previously affected the area 15 years ago, he added.