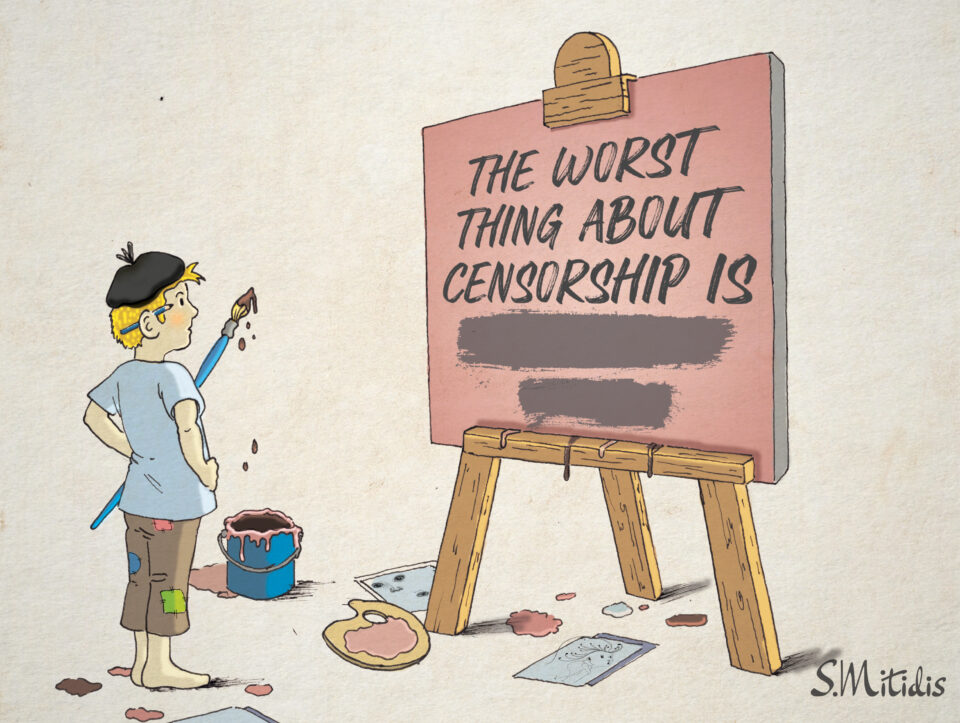 I MAKE a point of not following the Twitter accounts of our self-important scientists, who have become A-list celebrities of the Covid era, but a few days ago I was forwarded a tweet of comic arrogance by an Assistant Professor of Pharmacology at the University of Cyprus, Nikolas DietisPhD, expressing disapproval of the editorial in Wednesday’s Cyprus Mail.

The editorial criticised alarmist comments about the opening of schools by member of the scientific dream team and the top Covid celebrity, Professor Petros Karayiannis, whose frequency of appearance in the media is second only to Prez Nik’s. Not even our publicity-mad auditor-general has clocked up as much exposure time in the last 18 months.

Angered by the editorial, DietisPhD tweeted: “It appears to me that measure has been lost. The management of the newspaper should have known that it is the ‘job’ of the scientists to sound the alarm bells wherever and whenever this is dictated by their scientific view. Any unscientific criticism is misplaced.”

The Mail offended the Gods of scientific wisdom, whose scientific view is infallible and must always be accepted without any questions asked by ignorant mortals. Only the other members of the scientific cabal are qualified to question their fellow deities because their criticism will be scientific and they all agree with each other. Scientists that do not agree with them are quacks and charlatans.

THE THREAD of tweets, mostly agreed with DietisPhD, who felt obliged to elaborate further. “Here we have a news medium that exercises criticism of a scientific position, without having the ability for scientific judgment. Roles have been lost. Everyone has the right to an opinion. Criticism though requires knowledge.”

But I forgot that the pandemic has elevated scientists to God-like figures that cannot be questioned even when their advice destroys jobs, impoverishes people, spreads fear and causes psychological problems to countless people, because they are always right.

These are the scientists that advised the lockdown of the country for three months last year, when there were about 30 cases a day and an extremely low mortality rate. The same people who said all our problems would be over when 60 then 70 then 80 then 90 per cent of the population was vaccinated. And now they are blaming the unvaccinated for the persisting problems because the scientists are never wrong.

THE SCIENTIFIC comment by Professor Karayiannis to Tass news agency, which could also qualify as fear-mongering and which the Mail took exception to, was the following:

“There is concern because children are returning to schools without being vaccinated, no rapid or PCR tests are being carried out and this meant the protection were the protocols and the self-protection measures of the children that must be put into practice.”

What scientific evidence was there that no rapid or PCR tests were carried out on children before they returned to school? As for the suggestion that children should be vaccinated, we have not heard one member of the scientific dream team inform the ignorant public of the many scientists from top universities arguing that vaccinating children under 15 was a risk that should not be taken.

Perhaps DietisPhD will enlighten us in his next scientific tweet.

SPARE a thought for the poor supermarket owners who are threatening to take measures in protest against the SafePass because it was driving away business and making them liable to hefty fines that could reach as much as 8 grand.

This was “unfair competition” the supermarkets association said in a heart-rending announcement, because it was making people shop in the small stores – at least those that have not yet been driven out of business by the big supermarkets engaging in fair competition – that did not require a SafePass for entry.

What a nerve. The supermarkets, the only operations that were open for business during the lockdowns and restrictive measures, taking a huge proportion of the cash being spent in the economy, feel hard done by because they have lost a few unvaccinated customers and are being fined for ignoring the protocols.

I can’t wait to see what measures they will take. Will they close in protest for a few days or increase the price of all their products by 20 per cent? This would be another boost for the small grocery stores benefiting from the unfair competition caused by the SafePass.

A POLICE spokesman on Trito radio confirmed on Saturday that fines were being imposed on supermarkets, either for allowing people in without a Safe Pass or for employees that had not undergone a rapid test. He also said that many times the police carry out checks of supermarkets after receiving tip-offs from members of the public.

It seems that some of the features of the police state we were living in, such as police informants, have stayed with us. The snitching would be turned into a weapon for the consumer. If you feel the price of cucumbers is too high, or the person at the deli counter was rude to you just call the cops and tell them that the supermarket was allowing people in without asking for a SafePass.

BEING STUCK in the soul-destroying traffic congestion of Nicosia, in the last couple of weeks, I have to admit I felt a deep nostalgia for the time of lockdowns and work from home decrees. These were happy days for drivers who could go anywhere in town without encountering a single car queue.

In Nicosia, the objective of road planners/designers appears to be increasing traffic congestion and lengthening queues. They have achieved this remarkably well in the centre of town where they have reduced the number of lanes on several roads from three to two or four to three, while creating pavements so wide they would not be out of place in the centre of London.

That these are used by 20 people a day is irrelevant. The creation of bicycle lanes has also contributed to the narrowing of the roads, even though we have no cyclists. Now all that remains is to persuade Cypriots to give up their flash cars and get on their bike. This is only going to happen if the government issues a decree, banning the unvaccinated from using motor vehicles and forcing them to ride a bike.

LAST week our establishment reported on the prospective candidates of the 2023 presidential elections. We suspect we can add another name to the list, even though he has never been heard to express an interest in standing.

I refer to the education minister Prodromos Prodromou, whose embarrassing actions of the last few weeks raise suspicions that he is courting the ultra-nationalist, bible-thumping, extreme right section of the population.

After ordering the tearing of a page from a schoolbook which had a positive write-up of Kemal Ataturk, PP was this week exposed as the man wanting to bring disciplinary charges against the head-teacher, Giorgos Gavriel, for his irreverent paintings. He tried to blame these fascistic proceedings on the attorney-general but failed as the latter said they were initiated by the education ministry.

Both decisions will have made PP a folk hero in the eyes of the right-wing fanatics, religious zealots and fascism sympathisers, that may be looking for a presidential candidate. I can’t think of any other explanation for such resoundingly stupid decisions by a man with PP’s intelligence and high educational qualifications.

WHAT was the probability the British government’s ideas for breaking the Cyprob deadlock would have been accepted by our political parties? According to my totally unscientific knowledge, as I have no expertise in conflict resolution, political negotiations or stats, it would be one in 10 million, if I were being optimistic.

The ideas were floated in Politis a few months ago and provoked the customary knee-jerk reaction from all the parties. Last Sunday, British High Commissioner Stephen Lillie gave an interview to Kathimerini in order to explain the ideas and reassure us that his government was opposed to confederation and a two-state solution.

He did not convince any of the parties that insisted the ideas would lead to confederation and called on Britain to give up the role of undermining the Republic. In a few months, when our parties realise that nobody, not even the UN, is interested in the Cyprob, which is dead for the international community, they will be begging Britain to resume its undermining role.

EVEN Phil, who, 10 days ago, reported that UN Secretary-General Antonio Guterres “wants to take advantage of the momentum” created by the two leaders wanting to meet each other, in his presence in New York, appear deflated a week later.

On Friday it reported the meeting would take place in the Big Apple but it would be of “low expectations,” because Ersin Tatar was insisting on recognition of sovereignty. Poor old Guterres will have to live with yet another Cyprob disappointment, just when momentum was building.

I HAVE avoided making any unscientific criticism that would make me a subject of a DietisPhD tweet, even though I fear his ban on criticism without the required knowledge will drastically limit the subject matter this ignorant writer could be critical about. From next week I will just have to praise everyone, because even scientists welcome praise for their scientific positions from people without scientific judgment.