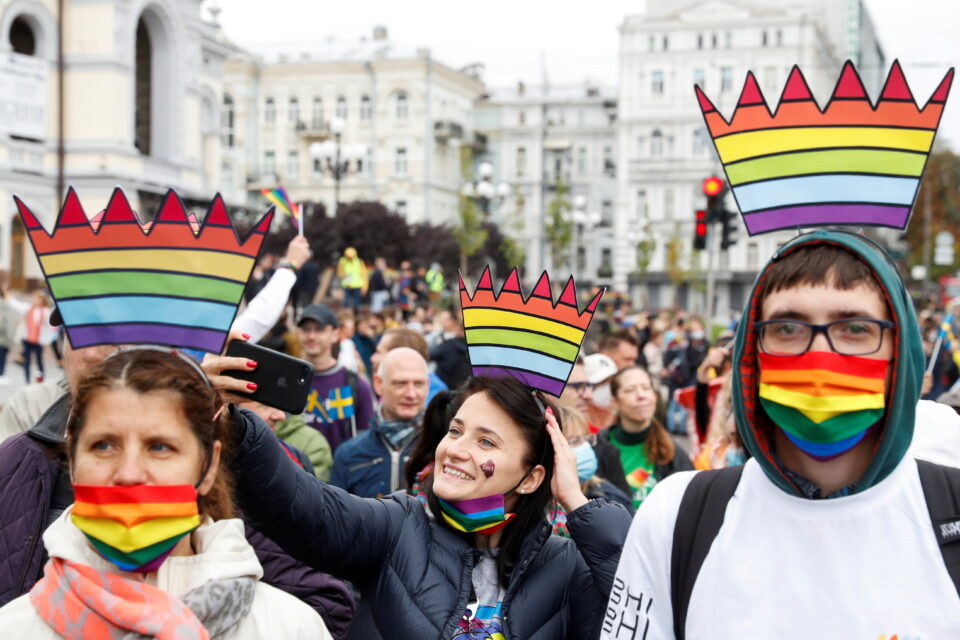 Participants take part in the Equality March, organized by the LGBT+ community in Kyiv, Ukraine September 19, 2021. REUTERS/Valentyn Ogirenko TPX IMAGES OF THE DAY

Thousands of people including soldiers and diplomats marched peacefully through the Ukrainian capital on Sunday in an annual gay pride parade despite some opposition to an event called off last year because of the coronavirus pandemic.

Organisers said about 7,000 attended the Equality March this year, compared to 8,000 in 2019, which saw the biggest turnout since the event was initiated a decade ago despite opposition from religious and nationalist groups.

Homophobia is widespread in Ukraine, according to a survey by the sociological group “Rating” published in August, which said 47% of respondents had a negative view of the LGBTQ+ community.

The marchers were flanked by police as a few hundred anti-gay rights protesters gathered nearby, but there was no violence.

“So fantastic to be out on the streets alongside my cool @UKinUkraine colleagues and friends supporting LGBTQ groups in Ukraine,” British Ambassador Melinda Simmons wrote on Twitter.

She posted a picture of herself surrounded by dozens of young smiling people with rainbow flags, some wearing rainbow masks.

“We want to protect the rights of LGBT people, because they first of all are humans,” student Olexandra told Reuters.

Dressed in military uniform, Anastasia, a veteran of the war with Russian-backed separatists, said the army had issues with equal rights.

“The service regulations do not allow you to reveal your (true) face,” she said. “This is the second time we have come to the pride (march) to openly say that in the army and other organisations not usually associated with the LGBT movement, there also are LGBT people.”

The government has increased support for LGBTQ+ rights since Western-backed leaders came to power in 2014. Parliament passed legislation in 2015 to ban discrimination in the workplace, but it does not allow for same-sex marriage or adoption of children.

“This is already the 10th pride, it was successful, it went calmly,” Leni Emson, director of the KyivPride non-government organization, told journalists.

Ukraine ombudswoman Lyudmyla Denisova wrote on Facebook on Sunday that the constitution recognises all people “equal in their rights from birth, regardless of any characteristics, including sexual orientation and gender identity”.

“I urge citizens to be tolerant to one another and refrain from manifestations of discrimination,” she said.