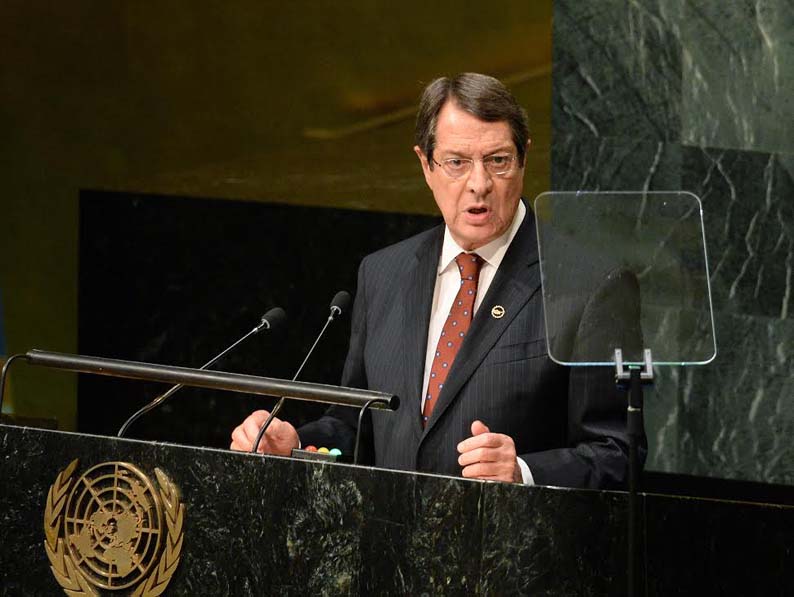 Guterres will also hold an informal meeting with Anastasiades and Turkish Cypriot leader Ersin Tatar, most probably on September 27.

According to state broadcaster CyBC, Anastasiades is to meet with Guterres on Tuesday.

Not much is expected from the New York meetings on the Cyprus problem given the unwavering position of the Turkish Cypriot side for recognition of the north’s sovereignty and a two-state solution.

CyBC reported that during the informal, trilateral meeting with the two leaders Guterres is to announce the name of his new, proposed special representative, to replace outgoing Elizabeth Spehar.

Anastasiades is expected to brief Guterres on his proposal for a return to the 1960 constitution made in response to the UNSG’s call for pitching new ideas to break the stalemate.

Earlier in the month, Anastasiades explained that it was not a call to return to a unitary state but rather a call to the Turkish Cypriot side to assume the positions it is entitled to based on the 1960 constitution so that a dialogue can start on territorial adjustments and other issues. Tatar has already rejected this proposal.

Head of main opposition Akel Stephanos Stephanou said he did not have high hopes for the informal trilateral meeting in New York. The Akel leader, who assessed his contacts in Athens last week, said there was common concern about Turkey’s plans and its attempt to promote a two-state solution.

Stephanou reiterated his party’s disagreement with the tabling of new proposals, arguing that the focus should be on what the UNSG himself has supported, namely the resumption of talks from where they left off in Crans Montana in 2017.

Anastasiades will address the 76th UN General Assembly on Friday.

Anastasiades will host a delegation of the American Jewish Public Affairs Committee (AIPAC) later on Monday, with which he will discuss the further enhancement of the strategic relations between Cyprus and Israel and will brief them on developments in the efforts to resolve the Cyprus issue.

Anastasiades is also scheduled to visit Ground Zero, where in a special ceremony he will lay a wreath at the Monument to the Victims of the 9/11 terrorist attacks.

Foreign Minister Nikos Christodoulides is scheduled on Monday to hold separate bilateral meetings with his counterparts from Egypt, Greece, Kuwait and Kyrgyzstan and participate in an informal meeting of the Foreign Ministers of the EU member states.

Greek Minister of State George Gerapetritis told Skai TV Athens did not request such a meeting. He also said the time schedules of the two leaders in New York do not coincide. Erdogan’s New York schedule ends on September 22, the day Mitsotakis is scheduled to arrive.