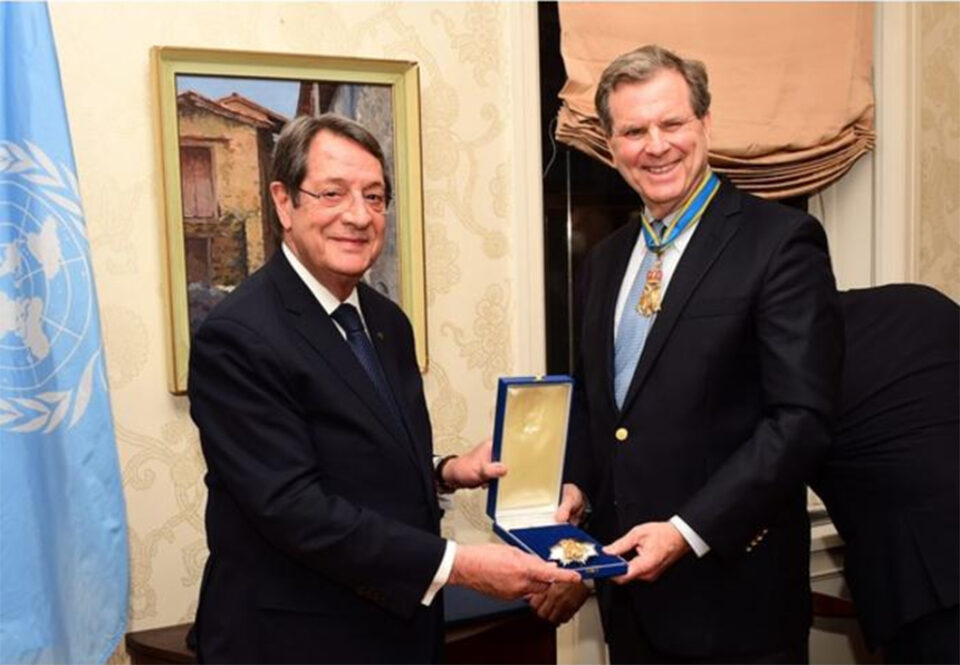 Cyprus awarded American Jewish Committee (AJC) CEO David Harris on Sunday night with one of the country’s leading honours during a ceremony at the residence of the Cypriot ambassador to the United Nations in New York.

President Nicos Anastasiades presented the medal of the Grand Commander of the Order of Makarios III to Harris.

“At the helm of AJC for more than three decades, your role has been absolutely instrumental in steering the evolution of your prestigious organisation’s strong collaboration with Cyprus and expanding Cypriot ties with Israel and the United States,” Anastasiades said.

“Through your decency, resilience and creativity, you managed to promote a practical and tangible cooperation between many of the countries of the Eastern Mediterranean and to advance a strategic partnership between Cyprus, Greece, Israel and the United States, all of which share your vision of a peaceful and prosperous region,” he continued.

Harris, who has been visiting Cyprus since the 1980s, expressed gratitude for the honour. “Cyprus is a valuable, indeed essential, partner of Israel, the United States, and the Jewish people,” said Harris.

He has often met President Anastasiades over the past eight years, both in Cyprus and the United States.

Representatives of Cypriot and Hellenic organisations in the US, as well as Greek, Israeli and American officials, attended the award ceremony.

Described by the late Israeli President Shimon Peres as the “foreign minister of the Jewish people,” Harris has been decorated by foreign governments more than any other Jewish organisational leader in American history.