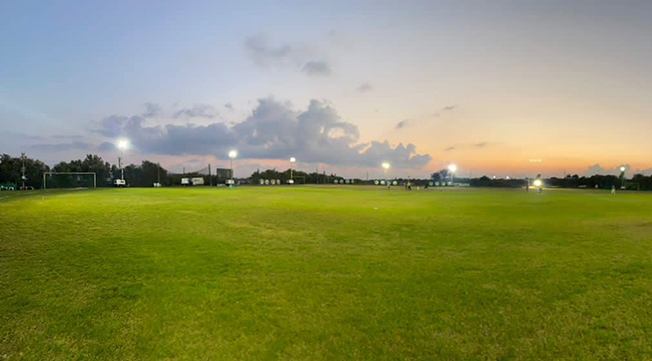 The Ypsonas ground at sunset, with the floodlights coming on as the sun goes down, ready for the evening matches in the ECS (European Cricket Series)

Four teams – Sri Lanka Lions, Limassol Qalandars, Cyprus Eagles CTL, and Amdocs – all still have a chance to finish second in the western group of the 2021 #BAOFINANCIAL T20 Cup, and Qalandars gave their hopes a boost with a convincing win over the Eagles at Ypsonas on Sunday.

After Jawad Ali Shah’s four wickets helped dismiss the Eagles for 128, captain Muhammad Farooq followed his own two wickets with an unbeaten 37. With support from Sohail Ahmed (31) he guided his team to a four-wicket win, and will be looking for a win in their last game to have a chance of pipping their rivals, if other results also go their way.

In the eastern group the bottom two battled it out to avoid the wooden spoon. Nicosia Fighters won the match by bowling out Singh Is King for 71 and knocking off the runs for the loss of six wickets. Interestingly, all the teams in this group have won at least two of their seven matches.

Only one game remains to be played in the eastern group, the eagerly awaited clash between Punjab Lions and current leaders Riyaan this Sunday. Second-placed Black Caps will be looking on with interest, as they will qualify for the semi finals if Riyaan win, and they could still finish second if Punjab Lions win, as all three teams would then be equal on points and the positions would be decided on net run rate.

Meanwhile the ECN series is underway, with matches played every evening under floodlights at Ypsonas. The event is proving very popular with players and, evidently, with viewers of the ECN YouTube channel, as two ten-over games are played daily in this fast-paced version of the game.

Preparations continue for the international matches between Cyprus, Estonia and Isle of Man next month. The national selectors have appointed Mihalis (Mike) Kyriakou to captain the side, and have chosen a squad of 22 players, which will be reduced to 16 before the matches begin.

How to increase employee productivity in the workplace