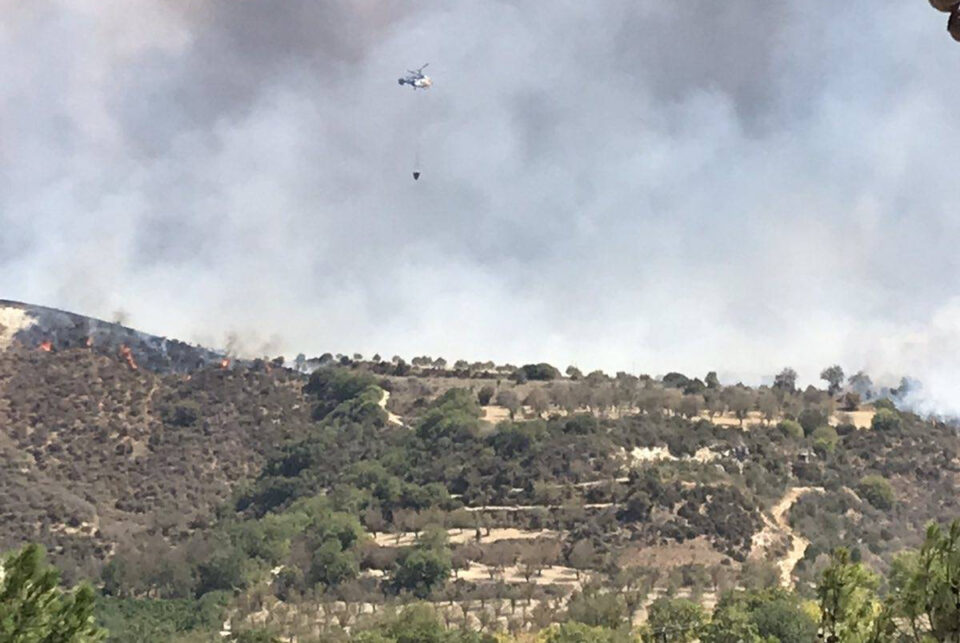 The fire in the Paphos villages of Yiolou and Simou which saw some residents evacuated on Sunday evening was started by human hand, fire services spokesman Andreas Kettis said on Monday.

“From early indications it looks like the fire was not accidental, it’s important to tell things as they are,” he told state broadcaster CyBC on Monday. He said it began in five different places.

“No arrests have yet been made but police and firefighters are looking into the causes of the fire and there are clear signs that it was man-made.”

Answering suggestions that the incident was provoked by hunters who started the fire in order to force some birds to move to areas where hunting is allowed, Kettis said that it was still unconfirmed but did not completely rule out the scenario.

He also added that firefighters will remain in the area over the next days to prevent any possible fires from resuming.

The fire was brought under control on Sunday evening but broke out again in one area overnight so fire fighting aircraft were used at first light to put it out.

On Sunday, Kettis said on Twitter that the decision to evacuate residents from villages affected by the fire was taken as a precautionary measure.

The blaze, which raged on two fronts in difficult to reach areas between Yiolou and Miliou, as well as Simou and Drymou, burned a total of eight square kilometres of dry vegetation, wild shrub and trees.

Additionally, the fire damaged livestock farms, agricultural areas and the outside areas of some people’s homes, mostly in Yiolou and Drymou, along with equipment in the vicinity.

“We were spared damages to houses but most of our almond and olive trees are completely burned,” he said.

Meanwhile, community leader of nearby Simou Andreas Papageorgiou, said it will take time for the effects of the fires to go away.

“I toured the entire area this morning and all I saw was ash, blackness and destruction,” Papageorgiou said.

“However, thanks to the prompt intervention of the fire department, the worst was averted and we have not had any casualties or irreparable damages to people’s homes.”

His thoughts were echoed by the Miliou community leader Eva Chrysanthou, who said people in her village were relatively lucky to get away with just damages to their crops and tree plantations.

“However, the damages are considerable. Our area is very rich in terms of vegetation and what happened is nothing short of an ecological disaster,” she said.

Speaking to the Cyprus News Agency, Lambrou said she is constantly liaising with the fire department to understand the extent of the damage to then inform the interior ministry.

On Monday, an investigation into the affected areas will be carried out by the administration to better assess the consequences of the incident, particularly as far as wild vegetation, trees and warehouses are concerned.

Without laying out the details, Lambrou said that damages to warehouses and vehicles will be covered by the government after thorough investigations.

She added that damages to crops and plantations will be assessed by the agriculture ministry.