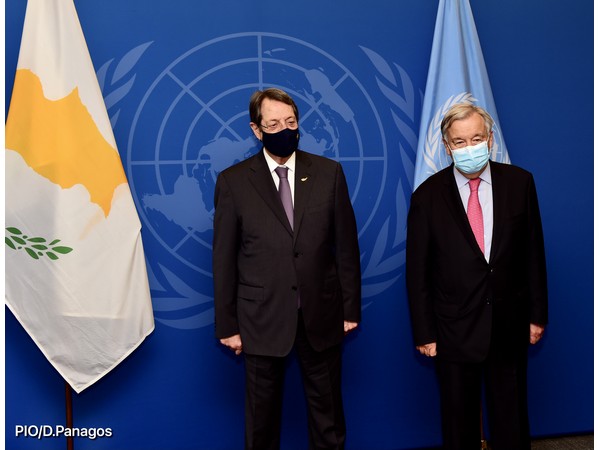 President Anastasiades said on Wednesday that his meeting with UN Secretary General Antonio Guterres had taken place in a creative atmosphere.

The president, in New York for the UN’s annual general assembly, said new positions and ideas related to the Cyprus issue were raised during the 20-minute meeting that took place early Wednesday morning Cyprus time.

He said he listed some positions over how a dialogue could be reignited ahead of a lunch with Turkish Cypriot leader Ersin Tatar and Guterres due to take place in New York on September 27.

“We have listed the views, positions over how a creative dialogue without prerequisites can be restarted. I have developed some positions and ideas and we have agreed that everything related to the Cyprus issue will also be discussed during the lunch we will have on the 27th, with Mr Tatar,” he said. “Let us hope that everything will go smoothly, so that there is a new outlook for Cyprus.”

Anastasiades said earlier in the week he would convey to Guterres the various alternative proposals he had suggested over time to overcome the stalemate such as the decentralisation of powers, parliamentary democracy, and confidence-building measures that would allow for a positive political climate leading to the creation of the necessary conditions for the resumption of talks.

He also said he would brief Guterres on his suggestion for a return to the 1960 Constitution under certain conditions, in order to ensure the continued existence of the state and its evolution in what has been agreed upon in the High-Level Agreements and based on UN resolutions.

But the president added he was not as optimistic as he would like as regards the two sides finding common ground for the resumption of talks, citing the repeated calls by the Turkish side for the recognition of the sovereignty of the north.

Turkish President Recept Tayyip Erdogan, in his speech at the UN General Assembly on Tuesday, spoke of “a realistic approach” on the Cyprus problem and said sovereign equality and the equal international status of the Turkish Cypriots was an essential element for a solution.

He said Turkey supported the Turkish Cypriots’ new vision for the solution of the Cyprus problem and called on the international community to assess these ideas “with an open mind and without prejudice”.

Erdogan also called for dialogue and cooperation and said Ankara’s proposal for an eastern Mediterranean summit was still on the table. Turkey has been calling for a regional conference with the participation also of the Turkish Cypriot side for all sides to discuss the disputes between them.

Nicosia, on the other hand, has invited Turkey to a dialogue over the delimitation of the maritime zones between their relevant coasts, including by submitting the issue to the International Court of Justice.