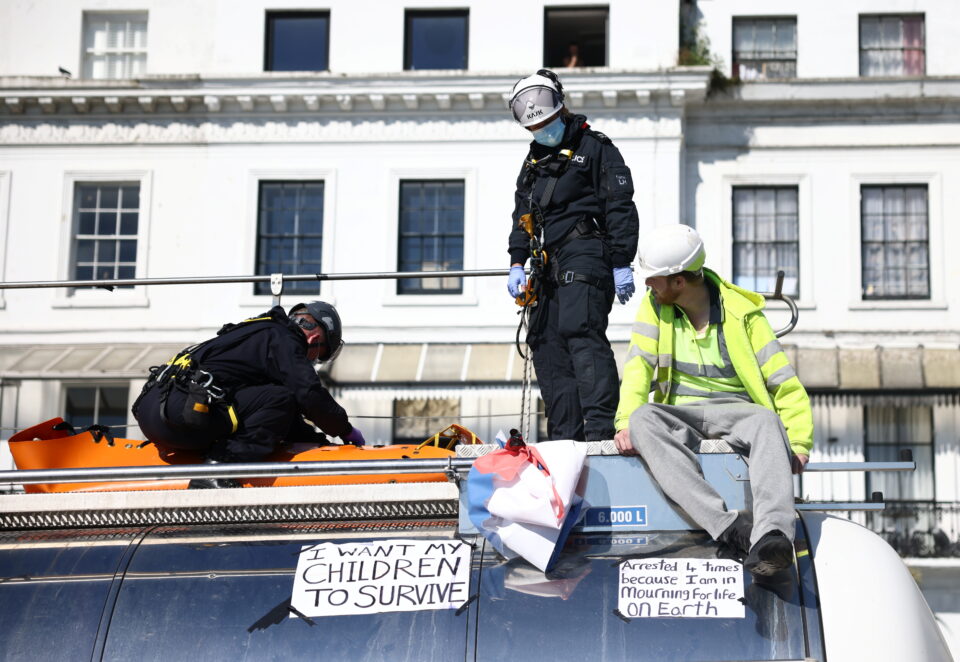 Police officers prepare to remove a protestor of the group "Insulate Britain" from the roof of a lorry at the entrance of Port of Dover, Britain, September 24, 2021. REUTERS/Henry Nicholls

About 40 activists from the environmental group Insulate Britain brought traffic to and from the port, the main artery for trade over the English Channel, to a standstill. Some demonstrators sat on the road until police cleared them.

The port said on Twitter that traffic was moving freely again about three hours after it announced the protest.

Insulate Britain wants the government to commit to providing insulation for 29 million homes in an effort to curb fossil fuel use and fight global warming.

The Transport Ministry said the High Court on Friday approved an injunction that would send members of the group to jail if they repeat the Dover protests.

The group has blocked London’s M25 orbital motorway five times in the last two weeks, and an order calling for jail time was issued earlier in the week for further protests on the M25.

“It is unacceptable that people cannot go about their day-to-day businesses … because of the reckless actions of a few protesters,” Transport Minister Grant Shapps said on Twitter.

Insulate Britain says the government should fund the insulation of all social housing by 2025. Nearly 15% of the UK’s total greenhouse gas emissions come from heating homes, it says.

“We are sorry for the disruption that we are causing. It seems to be the only way to keep the issue of insulation on the agenda,” the group said.

Britain, which aims to achieve net zero greenhouse gas emissions by 2050, will host the UN COP26 climate summit in Glasgow in November, where Prime Minister Boris Johnson will push world leaders to commit to ending reliance on fossil fuels.