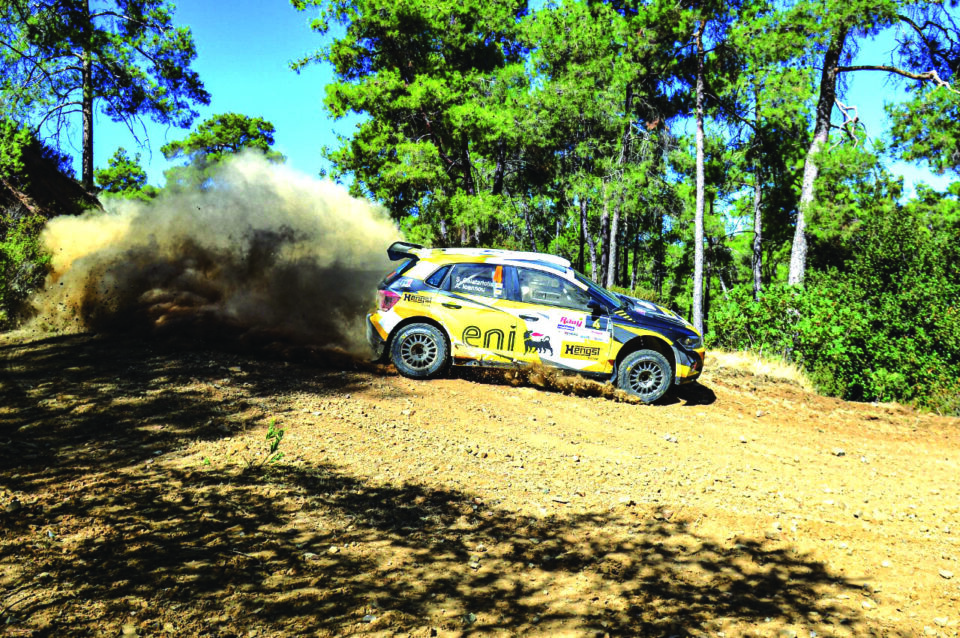 In a spectacular upset on the first day of the Cyprus Rally, race favourite Nasser Al Attiyah of Qatar went off the road and his car was consumed in flames on the last stage of the day, forcing the cancellation of the test to ensure the safety of other competitors. The remaining crews headed back to the overnight halt with the results up to the fifth stage counted as final for the Leg. It was a day of attrition for others, too: only 20 of the original 30 crews were still in the running on Saturday evening, although it wasn’t clear whether any of them would re-start on Sunday under the relevant regulations, which include a 10-minute penalty for every stage missed.

Much as expected, Al Attiyah had started cautiously on Saturday morning, in line with his philosophy that in Cyprus it pays to “drive smart”.

He clocked third fastest on the first 3 stages, deferring to Simos Galatariotis, who won all three time trials, and Alexandros Tsouloftas, who clocked the second quickest times.

When they returned to the Service Park for the midday regroup the Qatari driver was a full 46 seconds off the leader’s pace.

With less than 50 competitive kilometres scheduled on the afternoon loop, Nasser must have realised that he had perhaps taken it a little too easy, and sure enough he blistered through stage 4 fastest, but Galatariotis and Tsouloftas responded on stage 5, once again relegating the Qatari to third fastest, and third in the overall standings. There was everything to play for on the final stage of the day, but Nasser’s hopes of extending his record of 7 wins on this event were dashed by his mishap.

Fans can still expect some exciting action today (Sunday) as the two Cypriots battle it out for top honours: there are 86 kilometres of special stages, and only 26 seconds separating them, with a comfortable 5 minute cushion between Tsouloftas in second place and Oman’s Abdullah Al Rawahi in third. Petros Panteli and Panayiotis Yiangou round off the top 5.

Leg 2 starts at 08.00 hrs on Sunday and the crews will tackle 6 more special stages (at Lythrodontas, Ayios Epifanios and Αyia Marina, each run once in the morning and again in the afternoon) before heading back to central Nicosia for the finish ceremony in Eleftheria Square at 6pm.