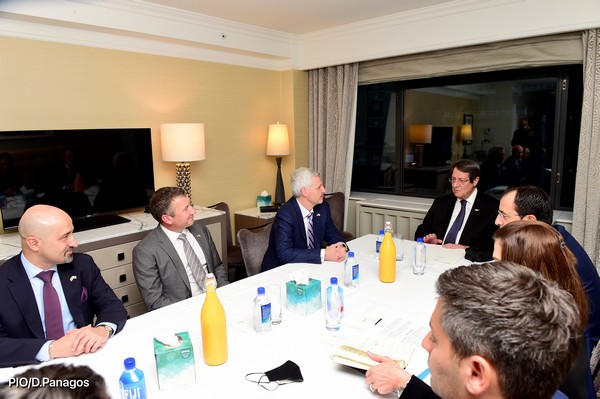 The two sides discussed issues related to the company’s plans in block 10 and developments in the eastern Mediterranean as well as further actions on the part of the government of Cyprus regarding the unhindered implementation of its energy designs in Cyprus’ EEZ.

“Had a great meeting with Senior Vice President of Exploration and New Ventures of ExxonMobil, Mr. Michael G. Cousins. Fruitful exchange on the excellent level of our cooperation, which will continue,” the president said on Twitter afterwards. “We agreed on the strategic importance of ExxonMobil presence in the maritime zones of Cyprus.”

He added that he reiterated the government’s efforts to establish a cooperative corporate climate in the East Med, where companies can operate within a stable and transparent investment environment.

ExxonMobil and its partners Qatar Petroleum plan on drilling an appraisal well in block 10, where natural gas was discovered, towards the end of November or early December.

Based on preliminary interpretation of the well data, the discovery could represent an in-place natural gas resource of approximately 142 billion to 227bn cubic metres, the company said in 2019.

Glaucus-1 was the second of a two-well drilling programme in block 10. The first well, Delphyne-1, did not encounter commercial quantities of hydrocarbons.

Block 10 is 2,572 square kilometres and ExxonMobil holds 60 per cent interest with Qatar Petroleum owning 40 per cent.