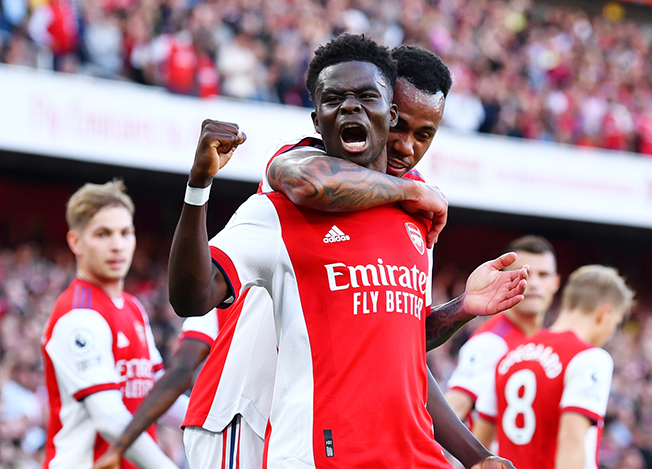 Arsenal’s resurgence continued with a 3-1 victory over arch-rivals Tottenham Hotspur as the two north London clubs continued to move in opposite directions in the Premier League on Sunday.

Goals by Emile Smith Rowe, Pierre-Emerick Aubameyang and Bukayo Saka crowned a majestic first-half display by a youthful Arsenal who were sharper and hungrier than a listless Tottenham.

Smith Rowe swept in Arsenal’s opener in the 12th minute and then set up Aubameyang in the 27th minute and when Saka made it 3-0 in the 34th minute the hosts were running riot.

There was a little more fight about Tottenham after the break and Son Heung-min pulled a goal back with little over 10 minutes remaining, but it was too little too late for the visitors whose early-season optimism has evaporated.

Arsenal, who were bottom after three games, are now in 10th place with nine points, ahead of Tottenham on goals scored.

It is a dramatic reversal of fortune for the two clubs and while Arsenal manager Mikel Arteta appears to have steadied the ship after a calamitous start, his opposite number Nuno Espirito Santo faces a tough task pulling his side out of their slump.

Tottenham have won only once in their last 29 league games away to Arsenal, but the nature of Sunday’s first-half capitulation will be a worry for their supporters.

Too many of their players under-performed and their confidence looks shredded as they conceded three or more goals in three consecutive Premier League games for the first time since 2003.

In contrast Arsenal, who fielded their youngest starting side for a home league game against Spurs since 1988, are buoyant.

Right from the start, there was an urgency about Arsenal and they needed only 12 minutes to take the lead.

Saka glided all too easily past Sergio Reguilon on the right before delivering a low cross for Smith Rowe to stroke a first-time shot past keeper Hugo Lloris.

Thomas Partey forced Lloris into a fine save and although Son did work Aaron Ramsdale with a powerful angled drive it was a rare moment of threat from the visitors.

Arsenal’s second was the result of a scintillating counter-attack that sliced Tottenham apart. Aubameyang’s clever touch released Smith Rowe on the halfway line and the Gabon striker steamed forward to get on the end of Smith Rowe’s cut back before shooting past Lloris.

The home fans were in raptures in the 35th minute when Harry Kane, trying to make amends for losing possession, slid in to tackle Saka but the ball broke kindly for his England team mate who angled a shot past Lloris.

Tottenham replaced Dele Alli and Japhet Tanganga at halftime although any number of their players might have been hooked off, such was the dismal quality of the visitors’ display.

Kane wasted a glorious chance after the break when he dinked a shot wide after an Arsenal defensive slip and that just about summed up the striker’s season so far.

And by the time Son gave the scoreline a little respectability, most of Tottenham’s fans were on the way home.

Jimenez back on scoresheet as Wolves beat Southampton
Wolverhampton Wanderers beat winless Southampton 1-0 in the Premier League on Sunday at St Mary’s Stadium after Mexican striker Raul Jimenez scored his first goal in nearly a year.

The solo effort in the second half was Jimenez’s first league goal since October and his first since a head injury in November prematurely ended his season.

Bruno Lage dropped wingers Adama Traore and Francisco Trincao from the Wolves starting lineup for Daniel Podence and Hwang Hee-chan, but the changes did little to inspire the team in attack, with the visitors having only one shot on target in the first half.

Southampton’s Nathan Redmond hit the back of the net in an otherwise dull opening period, but his strike was chalked off as the winger was offside when he received the ball.

Jimenez finally broke the deadlock in the 61st minute, shrugging off Jan Bednarek’s challenge to latch on to a long ball before wrong-footing centre back Mohammed Salisu to fire home.

Wolves held on to their lead despite some sustained pressure from the home side and moved provisionally up to 13th with their second win of the season, while Ralph Hasenhuettl’s Saints are 16th, one point above the relegation zone.