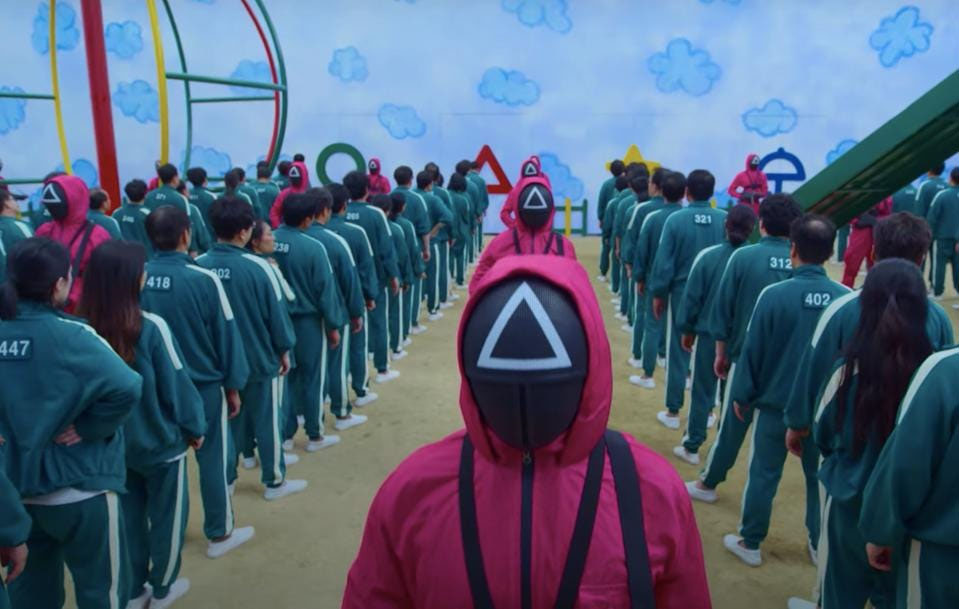 When Parasite, the thriller/comedy by Bong Joon-ho, swept the Oscars in 2019 (Best Picture, Best Director, Best Screenplay, Best International Film) it signalled a shift in western audiences as we were slowly discovering the amazing world that is the South Korean TV and film scene. Unlike Japanese and Chinese productions, S Korean TV is more grounded and actually develops characters instead of using two-dimensional stereotypes and caricatures. That character development and drama, combined with subversive ideas and huge budgets, made Korean TV a must see.

With The Squid Game dropping last week to raving reviews, here are some Korean TV productions to lose yourself in this week.

The Squid Game tells the story of Seong Gi-hun, a chauffeur and a gambler who decides to take part in  a series of children’s playground games, to win the grand prize (4.5 billion Korean Won, around €40 million). Things take a turn for the horrific when Gi-hun realises that these games are no game as failing results in gruesome death. The destitute Gi-hun quickly finds himself trapped a sadistic world, forced to compromise his morals or lose his life.

While heavily influenced by Battle Royale, The Squid Game takes a simple idea and turns it into a masterpiece series: what if playground games had actual life and death stakes? Like hopscotch but with landmines in some squares! The games provide the backdrop and narrative drive, but the series rises above simple gore-fests by injecting human drama and likeable characters.

Kingdom was Netflix’s first foray into the South Korean TV production scene, premiering in 2019. It tells the story of Crown Prince Lee Chang sometime during the Joseon dynastic period (1392-1897), who travels to the borders of his country to investigate a mysterious disease. Chang also has to deal with court intrigue, as contenders to his throne conspire to usurp him and his family. Also, zombies.

Managing to differentiate itself in an oversaturated genre, Kingdom treats the supernatural threat as a backdrop, a hidden threat moving the plot along but not dominating it, as is the case with The Walking Dead. Thanks to its budget (3 million per episode) Kingdom delivers on all fronts, both as historical fiction and a zombie survival series.

Ever wondered how The Godfather would look if it was a Korean drama? You haven’t? Well, you are in the minority as Vincenzo, the story of a Korean orphan adopted by an Italian Mafia boss, is taking Netflix by storm and became one of the highest rated dramas in Korea. Song Joong-ki stars as the titular Vincenzo, who returns to his hometown of Seoul looking for 1.5 tons of hidden gold. Vincenzo, who rose to conglieri (high level advisor) for a Mafia family was chased away from his adopted family after his mentor, Don Fabio Cassano passed away.

And if you happen to fall in love with the actor playing Vincenzo, be sure to also catch Space Sweepers, a Korean produced space opera film, that smashed the box office in Korea.

And to complete our Korean TV series suggestions, a police drama! Hwang Si-mok is a gifted prosecutor who struggles to fit in because brain surgery left him devoid of any empathy of any kind. He teams up with the legendary Bae Doona (Cloud Atlas, Sense8, Kingdom), a police lieutenant to solve a murder and go up against one of the country’s largest conglomerates. Taking the “anti-social-but-brilliant” trope used ad nauseam in US TV (see Dr House or any modern iteration of Sherlock Holmes), Stranger somehow makes it work by cranking it to 11 and adding great writing and amazing sequences.

Moment of truth for US Congress on govt funding, debt, Biden agenda