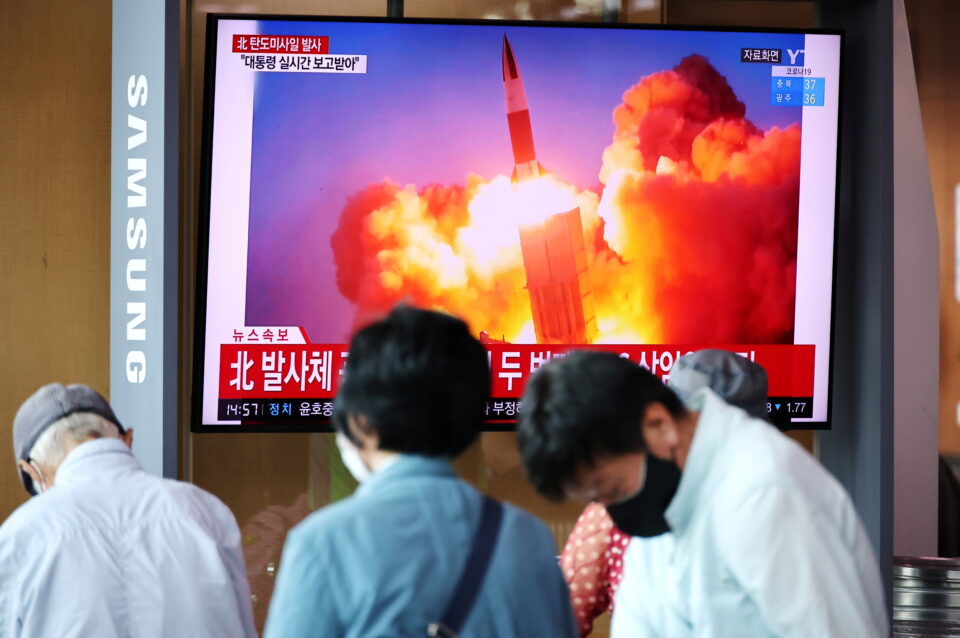 File photo: Footage of a news report on North Korea firing what appeared to be a pair of ballistic missiles off its east coast, in Seoul, South Korea, September 15, 2021. REUTERS/Kim Hong-Ji

North Korea fired a missile towards the sea off its east coast on Tuesday, South Korea’s military said, as Pyongyang called on the United States and South Korea to scrap their “double standards” on weapons programmes to restart talks.

The missile was launched from the central north province of Jagang at around 6:40 a.m. (2140 GMT), the South’s Joint Chiefs of Staff said. Japan’s defence ministry said it appeared to be a ballistic missile, without elaborating.

The latest test underscored the steady development of North Korea’s weapons systems, raising the stakes for stalled talks aimed at dismantling its nuclear and ballistic missile arsenals in return for U.S. sanctions relief.

The launch came just before North Korea’s ambassador to the United Nations urged the United States to give up its hostile policy towards Pyongyang and said no one could deny his country’s right to self defence and to test weapons.

“We regret that the missile was fired at a time when it was very important to stabilise the situation of the Korean peninsula,” defence ministry spokesman Boo Seung-chan told a briefing.

The U.S. Indo-Pacific Command said the launch highlighted “the destabilising impact” of the North’s illicit weapons programmes, while the U.S. State Department also condemned the test.

At the U.N. General Assembly, North Korea’s U.N. envoy, Kim Song, said the country was shoring up its self-defence and if the United States dropped its hostile policy and “double standards,” it would respond “willingly at any time” to offers to talks.

“But it is our judgment that there is no prospect at the present stage for the U.S. to really withdraw its hostile policy,” Kim said.

Referring to a call by Moon last week for a formal end to the 1950-53 Korean War, Kim said Washington needed to permanently stop joint military exercises with South Korea and remove “all kinds of strategic weapons” on and around the peninsula.

The United States stations various cutting edge military assets including nuclear bombers and fighter jets in South Korea, Guam and Japan as part of efforts to keep not only North Korea but also an increasingly assertive China in check.

Kim’s speech was in line with Pyongyang’s recent criticism that Seoul and Washington denounce its weapons development while continuing their own military activities.

Kim Yo Jong, the powerful sister of North Korean leader Kim Jong Un, has said the North is willing to improve inter-Korean ties and consider another summit if Seoul abandons its double standards and hostile policy toward Pyongyang.

“The conditions she suggested were essentially to demand that the North be accepted as a nuclear weapons state,” said Shin Beom-chul, a senior fellow at the Korea Research Institute for National Strategy in Seoul.

“Their goal is to achieve that prestige and drive a wedge between Seoul and Washington, taking advantage of Moon’s craving for diplomatic legacy as his term is running out.”

Moon, a liberal who has prioritised inter-Korean ties, sees declaring an end to the Korean War, even without a peace treaty to replace an armistice, as a way to revive denuclearisation negotiations between the North and the United States.

However, Moon, who has been in office for a single term, faces sagging popularity ahead of a presidential election in March.

Hopes for ending the war were raised after a historic summit between Kim Jong Un and then U.S. President Donald Trump in Singapore in 2018. But that possibility, and the momentum for talks came to nothing, with talks stalled since 2019.