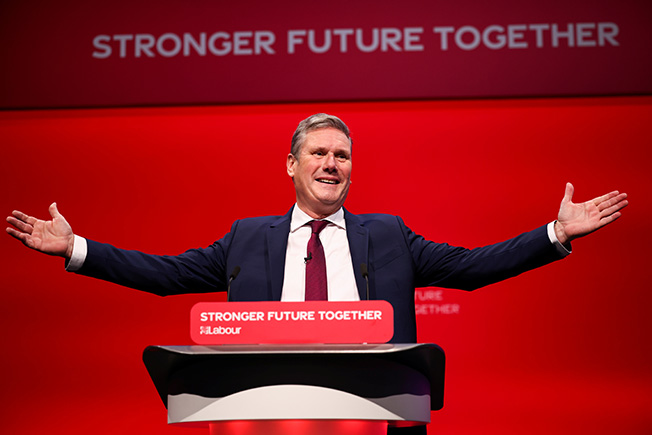 British Labour Party leader Keir Starmer promised on Wednesday to win back voters lost to Prime Minister Boris Johnson by prioritising key workers and balancing the books, a break with leftist supporters who heckled him during a conference speech.

After a low-key conference in the southern English seaside resort of Brighton, Starmer wanted to use his closing speech to show Labour was “back in business” after the party suffered its worst election defeat since 1935 in 2019.

He took aim at Johnson’s Conservatives, saying a series of crises and missteps over COVID-19 and the fuel crisis showed they were not fit to govern. He told the prime minister: “Either get a grip or get out of the way and let us clear up this mess.”

But his break with the left prompted angry shouts from a handful of supporters of his predecessor, veteran socialist Jeremy Corbyn. Starmer brushed them off by likening their actions to those of the Conservatives: “Doesn’t bother me then, doesn’t bother me now.”

But critics and even some in his party question whether the former human rights lawyer has what it takes to unite a deeply divided party or challenge Johnson’s ability to connect with voters.

“This is a big moment that demands leadership. Leadership founded on the principles that have informed my life and with which I honour where I have come from,” Starmer told the conference hall, winning repeated standing ovations.

Drawing on the experience of his parents – a tool maker in a factory and a nurse – Starmer promised to take his party back to its roots and protect essential workers but also prove it could be fiscally responsible.

“There will be no promises we can’t keep or commitments we can’t pay for,” he said.

Against the backdrop of COVID-19, Labour seemingly hopes to replicate some of the centre-left’s successes elsewhere in Europe by focusing on the importance – and often, also, the poor pay – of key workers in health, social care and other sectors.

“The questions we face in Britain today, are big ones. How we emerge from the biggest pandemic in a century. How we make our living in a competitive world. The climate crisis. Our relationship with Europe. The future of our union,” he said.

“These are big issues. But our politics is so small.”

Labour is closing the gap with the Conservatives in opinion polls and a spokesperson said the party was keen to show it was a competent alternative for a Britons beset by fuel shortages, empty shelves in some stores and soaring energy prices.

The party also wants to win back traditional supporters in northern and central England who voted Conservative in 2019, when Johnson adopted many of Labour’s more centrist policies.

But even some in his party say it has a mountain to climb – something Starmer seemed to allude to.

“To those Labour voters who said their grandparents would turn in their graves, that they couldn’t trust us with high office, to those who reluctantly chose the Tories because they didn’t believe our promises were credible,” he said.

“I say these simple but powerful words. We will never under my leadership go into an election with a manifesto that is not a serious plan for government.”

Under-fire Nuno only focused on how Tottenham can improve