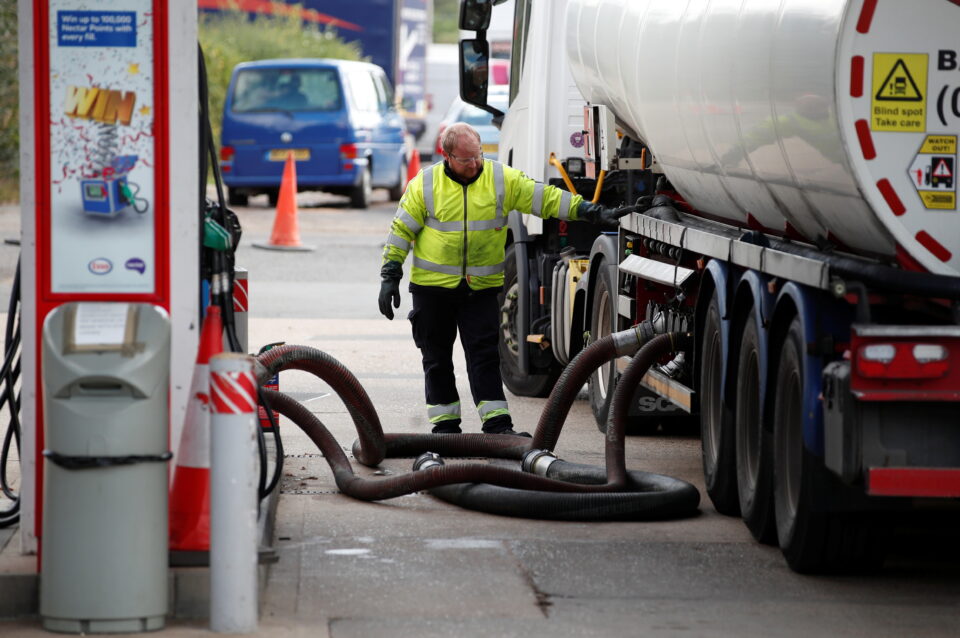 By James Davey and Guy Faulconbridge

More than two thousand British gas stations were still dry on Thursday due a shortage of truck drivers which was starting to disrupt deliveries to pharmacies, while farmers warned a lack of butchers could lead to a massive cull of pigs.

In a chaotic week where fights broke out at gas stations and people filled up old water bottles with petrol, British ministers have repeatedly said the crisis was easing, though they ordered soldiers on Wednesday to start driving fuel tankers.

Ministers have rejected accusations that the trucker shortage was caused by Britain’s withdrawal from the European Union, pointing to similar shortfalls elsewhere after Covid-19 lockdowns halted thousands of truck driver tests.

The Petrol Retailers Association (PRA), which represents 65% of Britain’s 8,380 forecourts, said members reported on Thursday that 27% of pumps were dry, 21% had just one fuel type in stock and 52% had enough petrol and diesel.

“This is running out quicker than usual due to unprecedented demand,” said PRA Executive Director Gordon Balmer, who said he was still hearing of verbal and physical abuse against gas station staff.

Reuters reporters visited 10 petrol stations in London and surrounding areas on Thursday. Three were open. A line of dozens of drivers snaked back from one of the open stations with staff attempting to direct the queue.

Such is the shortage of truckers that pharmacies were being affected.

“The whole supply chain has been impacted from inbound wholesale depot supply down to outward depot deliveries to pharmacies,” said a spokeswoman for the association which represents large pharmacy operators.

Besides fuel and medicine, the farming industry warned that hundreds of thousands of pigs may have to be culled within weeks unless the government issues visas to allow more butchers into the country.

Transport ministry data indicated that motor traffic had decreased by 6 percentage points on Monday from the previous week to the lowest volume on a non-holiday Monday since July 12. England ended COVID restrictions on July 19.

The disruption, and the spike in prices it is expected to fuel, threatens to undermine Britain’s economic growth, projected at 7% this year.

Data released by the Office for National Statistics on Thursday showed the economy grew by more than previously thought in the April-June period before what looked like a sharp slowdown more recently as post-lockdown bottlenecks, including the shortage of truck drivers, mount.

The gas station crisis has provoked scorn in some European capitals, with senior politicians suggesting Britain’s trucker shortage was a clear consequence of its 2016 referendum decision to leave the EU.

British ministers have denied this, though tens of thousands of EU truckers left during the Brexit maelstrom.

An acute shortage of butchers and slaughterers in the meat processing industry has been exacerbated by COVID-19 and Britain’s post-Brexit immigration policy, which has restricted the flow of east European workers.

As a result mature pigs ready for processing are backing-up on farms, causing welfare issues.

“There’s about 120,000 pigs sat on farm currently that should have already been slaughtered, butchered, be within the food chain and eaten by now,” said Wilson.

Minette Batters, president of the National Farmers Union, said a cull of up to 150,000 pigs was “potentially a week, ten days away”.