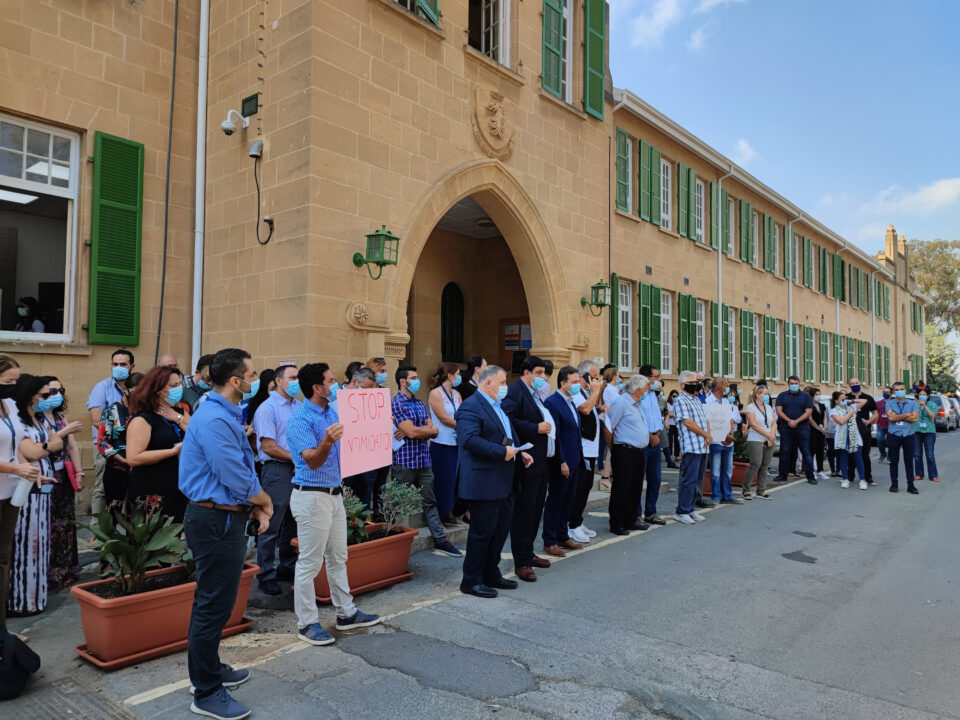 Teachers outside the English School in Nicosia on Wednesday

The English School staff union (ESSA) staged an impromptu work stoppage on Thursday morning to protest the suspension of their union chair after she allegedly used the school system to send unauthorised correspondence to parents.

According to the union, the school board announced that disciplinary action would be taken against her.

The stoppage lasted for two periods, between 9.55 and 11.30am, with support from unions Oelmek, Sek and Peo, members of the House education committee, and pupils.

Earlier this week, parents received a letter from the English School board of management informing them that ESSA had announced a two-period work stoppage for next Tuesday, October 5, and saying that the school would be “taking measures” to address it. Later on Thursday, the date of the stoppage was changed to Monday from 10am until the end of the school day.

Board chairman Charalambos Josephides called the decision “unwarranted” and “regrettable”, claiming the union had “ignored a recent invitation to discuss various pending issues” earlier in September.

The email used the same format and letterhead as official school correspondence, which may have initially led parents to believe it was sent by the school directly instead of a union representative.

However, it was sent by ESSA chair Myrto Hassapopoulou in an attempt to directly address the board’s claims and explain the proposed strike action.

Hassapopoulou said the union had “made it very clear both verbally and in writing, that its aim was to negotiate for the benefits of all staff,” adding that Josephides’ letter was “another attempt to undermine and disrespect” ESSA.

She denied that the union has “ignored” the board’s attempts to communicate, suggesting that instead the board purposely excluded staff from decisions that concern them.

In his letter, Josephides said that ESSA and the board had been at odds over a number of issues regarding contracts and changes to timetables without going into much detail.

The union said that two specific agreements (annual payment from board to ESSA and the Pastoral Care System) “are currently not being fulfilled” by the board, which “causes negative feelings amongst the staff”.

A second issue is that ESSA is not satisfied with the school’s new contracts, which according to them contradict the terms of the old ones.

“We are very disheartened that the matters have escalated to this point due to the Board of Management’s lack of interest in addressing the serious issues we face,” ESSA’s letter said.

On Thursday morning, ESSA issued a statement saying the board ruled Hassapopoulou’s move as grounds for suspension, alleging a personal data breach on her part.

The union therefore announced an impromptu stoppage, saying that the board’s decision to suspend a union representative “is a violation to the constitutional right to unionise”.

Teachers’ union Oelmek and teachers from Sek and Peo expressed “unlimited support” for the teachers.

“Authoritarianism, extremism, intimidation, lack of dialogue and any other remnant of colonialism” have no place in Cyprus, especially on the day of its independence, he said.

Akel and Dipa were also quick to voice their support for the union and condemn the school’s decision, and each released statements from MPs asking the president, the education minister, and the House education committee to intervene.

Diko MP and deputy head of the House education committee Chrysanthos Savvides said that unilateral decisions have no place in decisions concerning education, as these matters should be approached calmly, and with an open mind.

He added that the committee will discuss the issue in its next session.

Weighing in later in the day, the labour ministry called the impromptu stoppage “irregular” and in breach of the industrial relations code.

In a statement, the ministry said it had addressed a letter to both sides – the school and the union –a day earlier, summoning them to a mediation meeting for this coming Monday.

The ministry also called on the union to suspend any industrial action until then.

In the bag: Anya Taylor-Joy upturns her bookworm’s Parisian tote