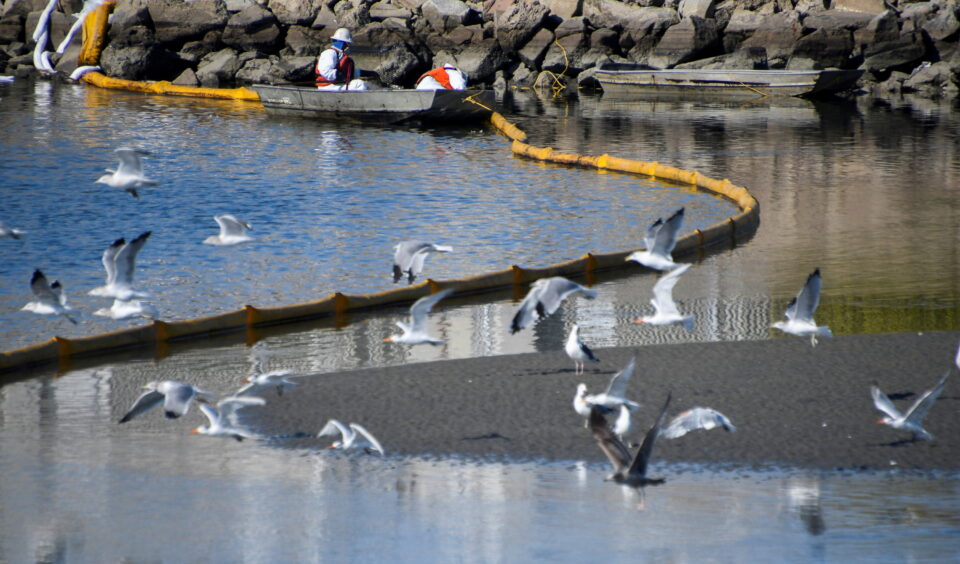 A clean-up team works on clearing the oil slicks at the Talbert Channel after a major oil spill off the coast of California has come ashore in Huntington Beach,

A huge oil spill off the coast of California is causing significant problems for local wildlife.

The Huntington Beach spill is thought to be one of the biggest in California’s history.

Around 572,000 litres of oil have spilled into the Pacific Ocean south of Los Angeles from a possible leak in an underwater pipe caused by a ship anchor hitting the pipe. About 18,902 litres were later recovered, officials said.

Beaches have been closed and dead fish and birds are washing up on shore.

Crews dressed in white coveralls and helmets raced against an approaching storm as they cleaned damage from 3,000 barrels of oil that spilled into the Pacific Ocean in recent days from a pipeline connected to an offshore facility owned by a unit of Amplify Energy Corp.

Amplify CEO Martyn Willsher said at a news conference on Monday it was possible a ship anchor could have struck the pipeline. Earlier, he said the line was shut and its remaining oil removed.

Dozens of container ships have been stranded off the coast recently, awaiting their turn to enter the port. The Coast Guard is assessing whether one of their anchors could have hit the line, said Captain Rebecca Ore. “It is possible they would transit over a pipeline,” she said.

As the crews worked to clean areas near the beach and wetlands running inland from the ocean on the eastern side of the coastal highway, residents told local news stations they had smelled a foul odour on Friday and were concerned about the lack of attention to the reports.

Willsher said Amplify received no reports of a smell on Friday. The pipeline and oil platform are run by a California subsidiary of the Houston-based offshore crude oil producer.

Amplify’s Willsher said the company has identified an area that could be the source of the leak, which divers will review.

Huntington Beach, about 40 miles (65 km) south of Los Angeles, had 13 square miles (34 square km) of ocean and portions of its coastline “covered in oil,” said Mayor Kim Carr. The town, which advertises itself as Surf City USA, is one of the rare places in Southern California where oil platforms are visible from the beach.

Among the areas threatened was the Magnolia Marsh, a wetland that was rehabilitated after a local conservancy bought the land in 2008. Up to 90 bird species use the area each year, including eight to 10 that are either endangered or threatened, officials have said.

Huntington Beach pier, a popular surf spot, was closed and the water was empty. Further up the coast at Bolsa Chica State beach, surfer Marty Kish, 45, said he and fellow surfers were angry.

“Everyone’s asking, ‘How could it happen?'” Kish said.

Some 23 oil and gas production facilities operate in federal waters off the California coast, according to the U.S. Bureau of Ocean Energy Management. Amplify’s Beta Offshore unit has three, including the Elly offshore platform, where the pipeline was connected.

Federal officials have stepped up scrutiny of ageing and idled offshore energy pipelines. Energy companies have built 40,000 miles (64,000 km) of oil and gas pipelines in federal offshore waters since the 1940s.

Regulators have failed to address risks from idled pipelines, platforms and other infrastructure on the sea floor, the watchdog U.S. Government Accountability Office (GAO) said this year.

“As pipelines age, they are more susceptible to damage from corrosion, mudslides and sea floor erosion,” GAO said.

Taylor Spadaccino: The rising star of the fitness industry