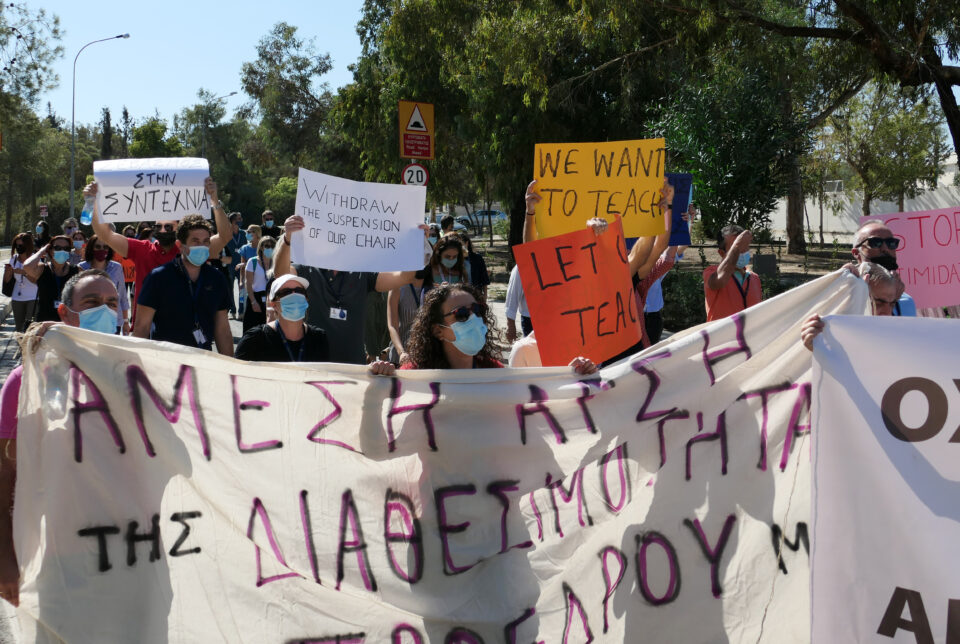 The English School staff union (ESSA) chair’s potential dismissal still loomed on Thursday as teachers continued their indefinite strike, amid concerns from parents, retired staff and school graduates over its impact on children’s education, and the school’s reputation.

However, later on Thursday Sigma reported that a deal was reached after a meeting brokered by the ministry of labour, and that classes would resume normally as of Friday.

As for the ESSA chair, the same report said she would return to her duties.

The previous day staff announced that their strike, which began after the suspension of ESSA chair Myrto Hassapopoulou last Thursday, would continue indefinitely after an investigative committee appointed by the school reportedly suggested to the board that she should be dismissed from her duties.

Hassapopoulou came under fire after allegedly using the school system to send unauthorised correspondence to parents on behalf of the union, which according to the committee suggested a breach of parents’ personal data.

In response to Wednesday’s decision, striking teachers marched to the presidential palace in protest.

During the day they announced they would be going on an indefinite strike over the “unjust, unacceptable and arbitrary” result of the probe.

They also said they were tabling a vote of no confidence in the board, and the school’s headmaster and the school management team.

As of Thursday afternoon, no official statements have been made to the press about Hassapopoulou’s fate.

For now, a small number of teachers who are not ESSA members have taken on teaching duties for the entire year groups corresponding to their subject, with lessons having reverted online.

The Cyprus Mail spoke to parents whose children are currently attending the English School, one in the second form and one in the seventh.

Both said they were concerned about how the continued strike could impact their children’s learning, echoing a statement from the English School parents’ association (ESPA) published on Tuesday.

“At the end of the day, those paying the price are the students, who were expecting after the lifting of coronavirus measures to return to a normal and stable learning environment, which they are entitled to,” the statement read.

“As you can imagine this is very disappointing to younger pupils,” a mother whose son is a second former said, explaining that her son was looking forward to going to school after only getting three months of in-person classes in his first year.

She said that last week’s impromptu stoppage “sent parents into a panic,” adding that nobody was expecting it to turn into an indefinite strike.

“As the parent of a lower-former, I am concerned that even if a solution is found to end the strike now, the problems will remain and might resurface in a few months, or even years,” she said.

The mother also said that the school has remained relatively quiet on developments on the case, which has resulted in parents feeling left out of decisions that concern their children.

A second parent, whose daughter is a seventh former, said that pupils who are due to sit important “future-defining” exams will be affected the most.

She even implied that this could lead even more pupils to take private lessons – a contentious matter at the English School – to cover the gaps left by the stoppage and get the A-level grades they need.

“Where is the education minister and what is he doing?” she asked, questioning why these negotiations couldn’t have been made before the start of the school year.

ESSA had originally planned a stoppage for this Tuesday over a number of disagreements with the board regarding teachers’ contracts and changes to the timetable, with either side accusing the other of refusing to cooperate on solutions.

When the board sent an email to parents informing them measures would be taken to address the planned stoppage, ESSA followed with a response sent through the school system.

The email used the same format and letterhead as official school correspondence, which may have initially led parents to believe it was sent by the school directly instead of a union representative.

However, it was sent by Hassapopoulou in an attempt to directly address the board’s claims and explain the proposed strike action.

This led to her suspension, triggering the first impromptu stoppage which has now escalated into an indefinite strike.

With the support of trade unions, MPs and members of the public, ESSA accused the school of attempting to quash union action through authoritarian practices – something the board has since refuted, saying the union chair is actually facing dismissal for committing a serious disciplinary offence.

In a statement the board also said it has officially sent a letter to ESSA for negotiations as soon as possible.

The employers and industrialists’ federation OEV condemned the strike measures and called on ESSA to lift the measures and enter into dialogue with the school.

The House education committee also announced it would be in contact with the board and the school’s management over this matter.

Meanwhile, in a scathing open letter circulated on Thursday, retired English School staff accused the board of a “Thatcherite attitude” and “methods resembling Nazi Germany”.

“This Board has made history by being the only Board in 120 years that led the teachers in taking industrial action,” it read.

The English School Old Boys and Girls Association (ESOBGA) also weighed in with concerns about the continued discord’s damaging effect on pupils, but also to the school’s reputation.

“Unfortunately, what has been happening in the past few days is not in line with the principles and values which stem from the motto of the school, “non sibi sed scholae” (“Not for yourself, but for the school”)”.

Our View: Warring sides in English School row oblivious to the interests of students