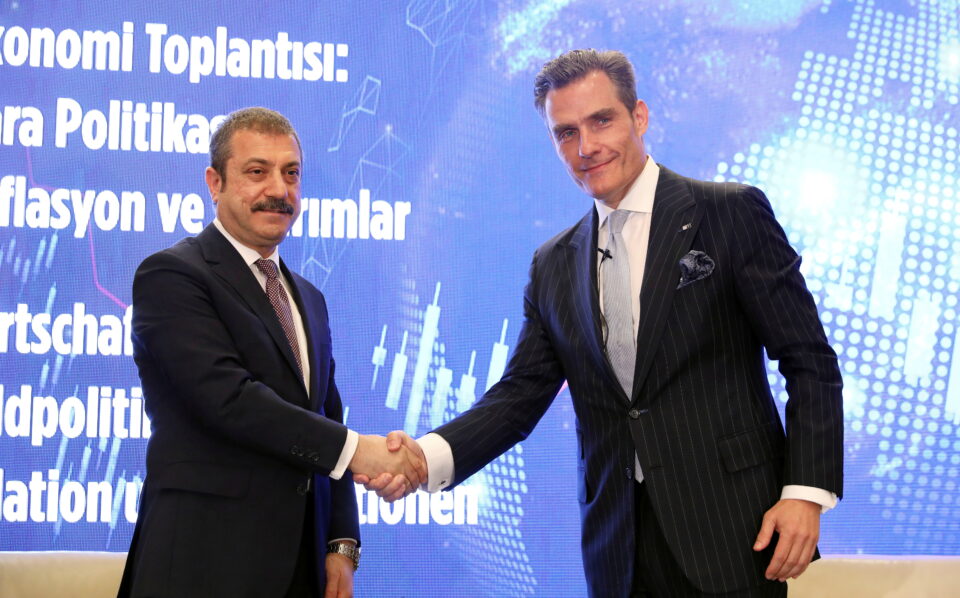 Turkish President Tayyip Erdogan is losing confidence in central bank governor Sahap Kavcioglu, less than seven months after he sacked his predecessor, and the two have communicated little in recent weeks, three sources familiar with the matter said.

The sources, who requested anonymity due to the sensitivity of the matter, said Erdogan was frustrated that an interest rate cut was delayed until just last month. It was unclear what Erdogan might do if anything, they said.

The presidential office did not respond to requests for comment on Erdogan’s confidence in Kavcioglu.

The president has abruptly fired three bank governors in the last 2-1/2 years over policy disagreements, roiling the lira and badly harming  the credibility and predictability of monetary policy.

Erdogan has not publicly addressed the rate cut, and the bank has declined to comment on allegations of political interference in its monetary policy.

The leader of the opposition IYI Party, Meral Aksener, said on Wednesday that Erdogan would probably soon fire Kavcioglu since that fitted the president’s historical pattern of “washing his hands” after bad policy decisions.

The sources, who are close to the presidency, said Erdogan was disappointed that Kavcioglu had been unable to lower inflation in recent months.

“The president’s trust in the central bank governor is damaged,” said one source with knowledge of the matter.

“What was expected of him was a swift rate cut. Instead, the same interest rate was kept for months,” the person added. “There is a serious discomfort over this issue. Erdogan does not meet with Kavcioglu as often anymore.”

The central bank did not comment when asked whether Kavcioglu still had the president’s confidence.

The two other sources confirmed the discord and noted that there would be risks to possibly replacing a fourth central bank chief – including three in the last 12 months alone – given the financial market volatility.

Kavcioglu “does not have a healthy communication with the president anymore,” said a second source. “My concern is whether the president’s own policies will be criticised now rather than that of the central bank governor.”

The bank cut its key rate to 18% from 19% last month despite rising price pressure.

Analysts say Erdogan’s heavier hand on monetary policy has contributed to a more than 50% drop in the lira in the last three years, a period in which inflation was mostly double digits.

Both have eaten into Turks’ earnings and hit the president’s opinion polls ahead of elections no later than mid-2023.

Erdogan appointed Kavcioglu in March after ousting Naci Agbal, a policy hawk who had hiked rates to 19%. Erdogan ramped up pressure for easing in June when he said publicly that he spoke to Kavcioglu about the need for a rate cut after August.

The first source said that in the past months, Kavcioglu had briefed the president that inflation was expected to drop by August, followed quickly by rates, but he only provided “the best case scenario”. In the end, inflation marched only higher.

Inflation has unexpectedly risen globally this year, driven by post-pandemic supply bottlenecks and rising commodity prices, and catching most central banks off guard.

Aksener, seen as a possible opposition presidential candidate, said Erdogan’s interference with the central bank is a “monstrous system” that depreciated the lira and raised the country’s external debt.

Kavcioglu’s “expiration date is approaching (in) this system that grinds bureaucrats like grinding garbage,” she told party members in parliament on Wednesday.

Erdogan sacked Kavcioglu’s predecessor less than seven months ago, and also fired two others in the last 2-1/2 years.

The rapid turnover has hurt monetary policy credibility, and has left inflation high and the lira weak. Here is a history of the last four central bank governors:

Cetinkaya’s early months as governor in 2016 were the last that Turkey’s inflation rate has been within an official target range around 5%. Throughout 2018 he faced rising price pressures and lira depreciation that would culminate in a full-blown currency crisis, which was driven by a diplomatic dispute over the release of a U.S. pastor, the threat of U.S. sanctions and emerging worries over Erdogan’s influence over monetary policy.

Analysts said Cetinkaya was too slow to head off the crisis. By the time he raised the key policy interest rate to 24% in September of 2018, the damage was done: the economy was tipping into a deep downturn that would bring an end to years of the strong economic growth that had come to define Erdogan’s leadership since 2003.

He nonetheless held policy steady and brought about a sharp fall in annual inflation through most of 2019. Erdogan, a self-described enemy of interest rates and eager for stimulus, ousted him in the early hours of a Saturday with a notice in the official gazette. Others would be fired in the same abrupt way.

Weeks after becoming governor, Murat Uysal – who had been Cetinkaya’s deputy – began an aggressive easing cycle that brought the policy rate as low as 8.25% in 2020, from 24%. The cuts, combined with a boom in state-bank lending, helped ease financial stresses as the coronavirus pandemic hit. But with inflation rebounding, Uysal reversed course and began tightening again in his last few months at the central bank.

A former private-sector banker and gold trader, Uysal – together with then Finance Minister Berat Albayrak – also oversaw an unorthodox and risky policy of foreign-exchange interventions in 2019 and 2020 that severely diminished the bank’s hard currency reserves.

The interventions were conducted by state banks and backed by the central bank via swaps, and were meant to stabilise the beleaguered lira. But the $128 billion in sales left the country more vulnerable to a balance-of-payments-crisis, analysts said, and Uysal had little success securing relief swaps with foreign central banks.

A former finance minister and long-time member of Erdogan’s AK Party, Agbal took the reins on an explosive weekend in Turkish politics. A day after the appointment, Albayrak, Erdogan’s son-in-law, announced his resignation as finance minister with a message on Instagram. Reuters later reported that Agbal had met with Erdogan days earlier to warn that the Albayrak-Uysal policy of FX interventions left the central bank’s reserves vulnerable.

Agbal quickly emerged as a respected inflation hawk and his short stint was dominated by aggressive rate hikes that picked up where Uysal left off. The lira rallied in response and some foreign investors edged back into Turkish assets after years of fleeing.

Days before he too was fired early on a Saturday, Agbal raised rates one last time to 19%. Reuters later reported that Erdogan ousted Agbal in part because he was irked by the governor’s internal bank review of the costly FX interventions, which were linked to his son-in-law.

An ex-banker who was not well known among mainstream economists, Kavcioglu’s arrival at the bank was met with a sharp market sell-off in which the lira briefly lost 15% of its value before recovering some losses. His previous columns in a pro-government newspaper showed he shared Erdogan’s unorthodox view that high rates cause inflation, so investors prepared for prompt cuts. Yet as inflation continued to rise and the currency floundered, Kavcioglu held rates steady through the summer.

But with Erdogan publicly promising lower rates and inflation, Kavcioglu pivoted in September. He began giving dovish signals and urged investors to focus on a lower, core inflation measure, paving the way to a surprise 100 basis-point rate cut later that month that sent the lira to new all-time lows.