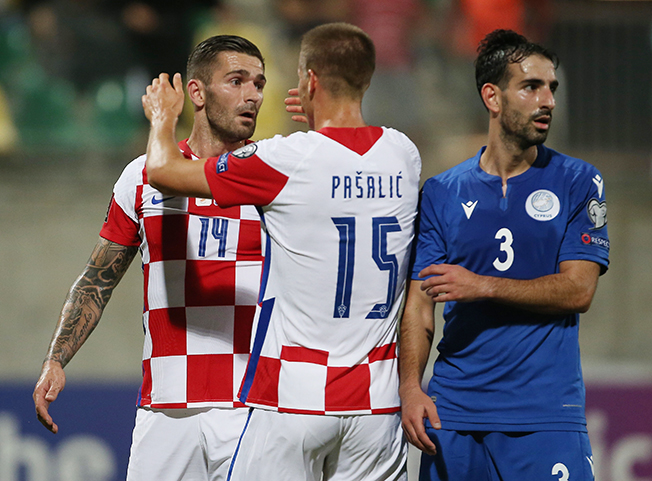 Croatia stayed on course to qualify automatically for the 2022 World Cup after goals from Ivan Perisic, Josko Gvardiol and Marko Livaja helped the 2018 runners-up to a 3-0 win in Cyprus in their Group H qualifier on Friday.

The result kept Croatia top on 16 points from seven games, ahead of Russia on goal difference after the Russians ground out a 1-0 home win over Slovakia. Third-placed Slovenia are six points behind the front-runners after they beat Malta 4-0 away.

Andrej Kramaric had a goal scrapped for offside after a lengthy VAR check and Luka Modric missed a penalty but the Croatians cruised to victory despite some poor finishing in the first half.

Perisic fired the visitors ahead on the stroke of halftime with a fine finish after Modric, who returned to the side after missing the previous three qualifiers, released the winger with a defence-splitting pass.

Neophytos Michael saved Modric’s penalty in the 54th minute after Kramaric was brought down in the area before Nikola Vlasic fired into the side netting on the hour.

The keeper, who pulled off several fine saves in the first half, then denied Modric and substitute Josip Brekalo but was powerless when centre back Gvardiol made it 2-0 with his first international goal.

Gvardiol was left unmarked at the far post to steer the ball home in the 80th minute after Modric racked up another assist as he swung in a corner deflected into Gvardiol’s stride by a Cyprus defender.

Livaja added the icing on the cake in stoppage time as he slid in to steer a Brekalo cross past Michael. The Croatians next play Slovakia at home while Cyprus host Malta and Russia visit Slovenia on Monday.

Wales fight back for 2-2 draw against Czechs
A Daniel James strike helped Wales fight back to draw 2-2 with the Czech Republic in an entertaining World Cup qualifier on Friday after the visitor’s goalkeeper had gifted the hosts a second half lead.

Wales opened the scoring in the 36th minute on the counter-attack when Aaron Ramsey fired home from a sharp angle after a James header from a long Neco Williams pass found the Juventus midfielder at the far post.

The hosts responded less than two minutes later when Welsh goalkeeper Danny Ward palmed an Antonin Barak shot into the path of Jakub Pesek who swept the ball into the net to level the score.

The Czechs took the lead just after the break when Ramsey played a simple back pass to Ward who failed to control the ball and watched it dribble over the line in a match in which both sides created chances.

The visitors — playing without an injured Gareth Bale — levelled in the 69th minute after substitute Harry Wilson slotted a through ball to James who drove a shot past Czech keeper Tomas Vaclik into the far corner.

The Czechs have eight points from six matches in Group E, level with Wales but sit in second place behind leaders Belgium on goal difference.

Substitute Thomas Mueller scored an 81st minute winner to complete Germany’s 2-1 comeback win over visitors Romania in their 2022 World Cup qualifier on Friday that kept them on course for a spot in next year’s tournament.

The Germans, who have now won all four matches under new coach Hansi Flick, lead the standings in Group J with 18 points from seven matches, six ahead of North Macedonia and Armenia.

Facebook apologizes for second outage in a week, services back up (Updated)

Our View: Time to take a stand against CoLA