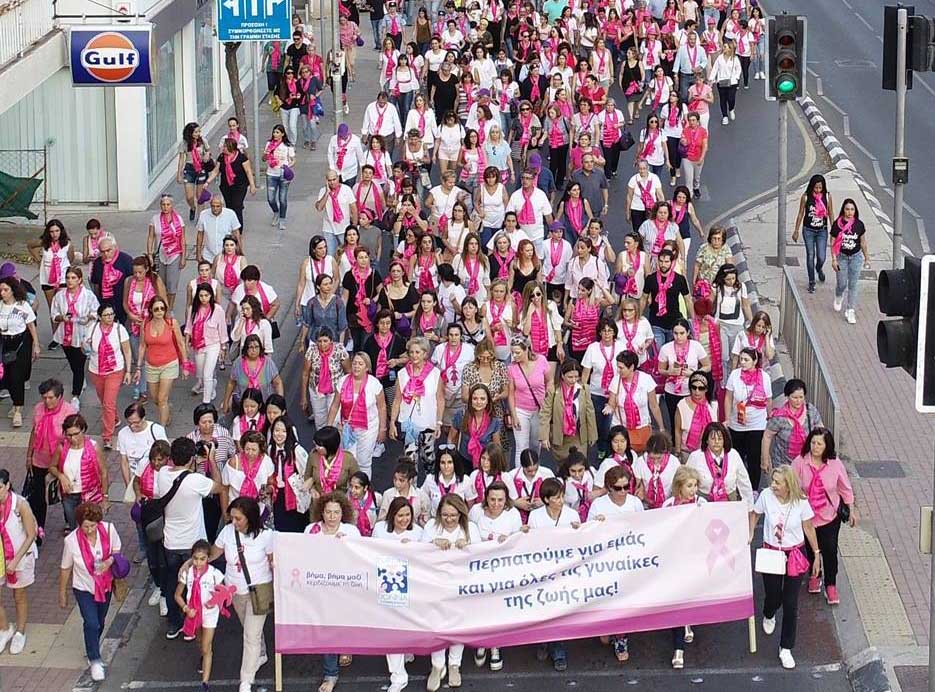 Cancer screening and its treatment has been just one of many areas of public health perceived to have fallen by the wayside as health services struggled to cope with the coronavirus pandemic.

But despite a reduction in mammograms during the harshest days of the pandemic, breast cancer diagnosis in 2020 and 2021 overall appears to be at similar levels to previous years.

Breast cancer treatment itself, meanwhile, was not impacted according to the Bank of Cyprus (BoC) oncology centre.

“Despite difficulties during Covid we managed not to delay any treatments for our patients,” oncologist at the centre Yiola Marcou told the Sunday Mail as Cyprus marks Breast Cancer Awareness month.

Initially, during the first wave of the pandemic, there was a significant reduction in the numbers of women having their standard biannual mammograms.

“There were 20 per cent fewer screenings in 2020 to 2021 according to the population-based breast cancer screening programme of the health ministry in which we are participating,” said office administrator at Europa Donna, Louisa Poly.

The Cyprus branch of this European wide breast cancer awareness organisation works closely with the health ministry on the national screening programme for breast cancer and the setting up of the breast centre at Nicosia general hospital.

Through the programme, women aged 50 to 69 are offered a free mammograph every two years.

“Screenings are extremely important for early diagnosis,” a mammographer told the Sunday Mail.

Additional screening may be prescribed by doctors within the national health scheme (Gesy) if necessary, and will be compensated by the Health Insurance Organisation (HIO).

The most significant reduction in screenings was recorded during the first wave of the pandemic because of measures in place and women’s fear of catching the virus. There was a small increase after the majority of restrictions were lifted. But, according to the BoC oncology centre the drop in Cyprus was less marked than elsewhere.

“Patients in Cyprus were extremely disciplined and they were vaccinated earlier on,” said Marcou.

This year, an estimated of 600 breast cancer cases are expected, a number similar to that of the previous year, based on data from the oncology centre.

Breast cancer affects approximately 600 to 650 people in Cyprus annually, the majority being women, while men concern less than 2 per cent of the cases.

“Less than 10 every year will be males, which corresponds to the proportion of one man to every 10 women,” Marcou said.

Survival rates of breast cancer in the country is also among the highest in Europe, said Dr Marcou, “as our patients have access to new and innovative treatments”.

This is supported by data from the World Health Organisation.

“Mortality from cancer is the second leading cause of death in the island, accounting for 19 per cent of all deaths among women in 2014 and 27 per cent among men, though the age standardised death rate for cancer was still lowest in the EU,” WHO said in a recent report.

The most obvious impact was that the NGO’s annual march which usually attracts thousands of supporters carrying the group’s trademark pink silhouettes had to be downsized due to pandemic measures. Instead, a torch race was held on Saturday in Nicosia.

“This year was difficult due to the pandemic,” said head of Europa Donna Cyprus Stella Mastora.

This meant that Europa Donna continued its support of breast cancer patients that it has offered since 2002. This includes offering psychological support (psycho-oncology) as well as free palliative care and physiotherapy sessions for the treatment of secondary problems that arise after anti-cancerous treatments.

In addition, Europa Donna provides a grant of 200 euros to each patient, for the purchase of a wig or silicone bra. Since 2019, the charity included women suffering from ovarian cancer in its programmes.

Cancer as a chance to start over

When it comes to cancer, a silver lining seems impossible to find, but not for Marilena Palazi when she suddenly discovered she had the disease in March 2019.

“When you pass through cancer, nothing is the same. You start over. I interpret it as a second chance to restart your life from the beginning,” said the 52-year-old owner of a communications company.

Marilena used to hate doctors’ appointments and her heavy workload was always the excuse for not getting screened regularly. Now, if someone were to give her that excuse, they will get a good talking to, maybe even a “slap in the face”.

Although her cancer was caught early, Marilena still had to do the complete treatment as her type was particularly aggressive.

“If I had left it for a couple of months it would have destroyed me,” she said.

Luckily her body was giving her the signals beforehand. Marilena had been feeling tired before she visited the gynaecologist to ask for supplements to help balance her hormones so she could rest.

“I had a very active life and career, so trouble sleeping wasn’t that unusual,” said Marilena, who was also going through menopause at the time.

Her gynaecologist referred her for a mammogram and then a biopsy which showed that the lump in her right breast was malignant.

Just three weeks later, the workaholic had to undergo a tumourectomy. In addition to removing the tumour, doctors had to remove three lymph nodes near the armpit, which left Palazi with permanent arm issues.

“Your arm doesn’t work properly, you need to be careful not to carry weight and wear a specific glove during travel to protect it from the pressure,” she said.

Six months of chemotherapy followed the surgery, which preceded 33 sessions of radiation.

At the same time, she had to “move on with life” and continued to work throughout her treatment. “I didn’t stop not even for a day. The only time that I wasn’t busy with work were the times that I was at chemotherapy sessions.”

However, the hardest part for the mother of two, was having to watch her children worry about her and seeing her getting weak.

She says it’s important to remember that loved ones of cancer patients have also received the same diagnosis.

“Even though you are the patient, they are also suffering and need some sort of support, sympathy and love to be able to deal with it.”

In terms of dealing with cancer she says a good mental state and psychological support act as an inhibitory agent.

This sense of control is hard to gain on hormone suppressants, which Palazi must keep taking for five years and learn to manage the side effects that include limb pain and stiffness, dry skin and eyes, as well as mood swings.

Despite the difficulties, Marilena said she “gained a new life” since her diagnosis, from meeting new people who went through a similar experience, to changing her diet and routine.

“I was a carnivore, now I am a vegetarian. I changed the products I use from inside out; I avoid parabens, toxins and products with aluminium – anything that I feel is a carcinogen.”

She is also an administrative member of Europa Donna and is actively involved in helping others with cancer.

Above and beyond it all, a positive attitude is key.

This can be broken down into relatively simple things.

Marilena recommends, for instance, getting your eyebrows tattooed before chemotherapy.

“It is very important for your mental health to look in the mirror and not see a sick person. To try and look a bit like yourself – because you do not look like yourself,” she says.

“It’s like getting your guns ready before you go into battle.”

But the positivity also has to work on a much deeper level of course.

“You can win this battle, but only if you try and put it in your state of mind. Love yourself, get as much love and care as possible for yourself and family so that you are psychologically positive. This will help you through the hard times.”