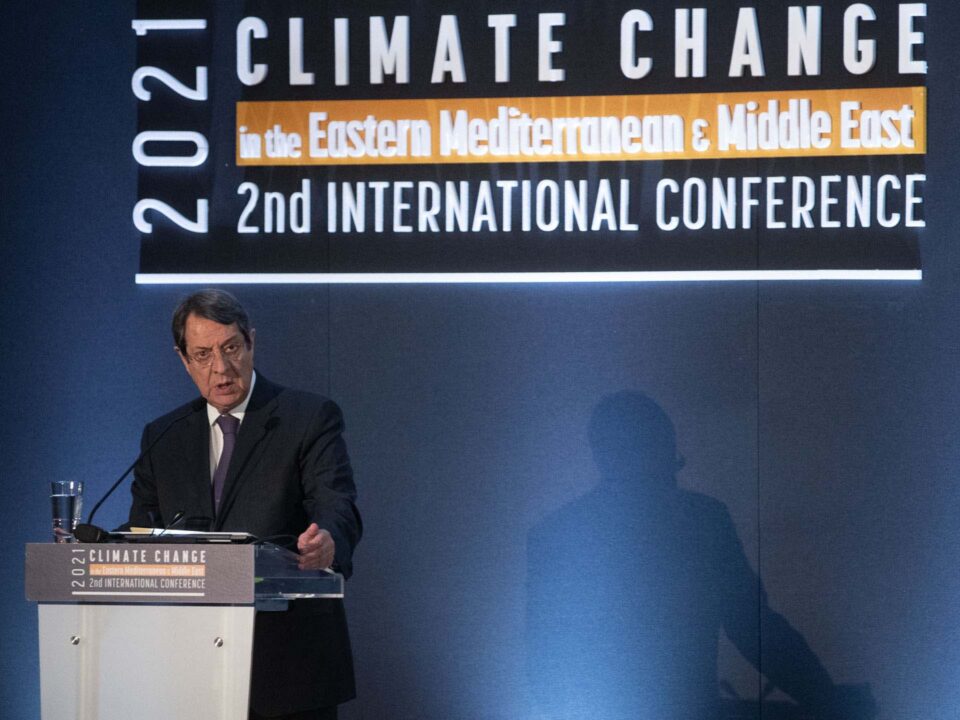 Failure to act on climate change will impact public health, ecosystems, agriculture, tourism and water resources in an unprecedented way, President Nicos Anastasiades said on Wednesday, warning that the supply of basic needs was already under threat.

The president was addressing the ‘2nd International Conference on Climate Change in the Eastern Mediterranean and Middle East: Challenges and Solutions’ at Aphrodite Hills in Paphos.

The conference is taking place under the umbrella of the Cyprus Institute which coordinates the scientific actions of more than 200 scientists and specialists from 25 countries. It is also co-organised by the delegation of the European Commission in Cyprus, as well as the Centre for Excellence in Climate and Atmospheric Research (EMME-CARE).

Anastasiades said the participation of so many government representatives, renowned policy makers and prominent international scientific experts from the region and beyond, was indicative not only of the gravity of the crisis, but of the collective resolve to address its dire effects.

He said that during the first conference in May 2018 the scientific community had conveyed “a clear and alarming message”.

“Our region is classified as a global ‘climate change hot-spot’, being particularly vulnerable to its negative impact, with our countries already witnessing consequent serious challenges,” he said.

“All these phenomena attest the difficult situation we are facing and if we fail to act the impact on public health, ecosystems, agriculture, tourism and water resources will be unprecedented,” he said. “Even as we speak, the supply to our citizens of basic needs, such as food and water, is under threat”.

If governments did not mitigate the effects of climate change the pressure would increase dramatically form citizens for better health and living conditions, improved air quality and a clean environment.

There was an urgent need to act, he said, and briefed the conference on Cyprus’ regional action plan.

During the past two years the Cyprus Institute had coordinated the work of 13 Regional Task Forces, in which, more than 240 scientists from the region and international organisations participated on a voluntary basis for the preparation of the thematic reports.

He urged all governments in the region to commit to the initiative. In this regard, a ministerial meeting and a leaders’ summit is expected to take place in the coming months expecting participating countries to promote actions to reduce greenhouse gas emissions and adapt to climate change impacts, and establish the necessary mechanisms for more resilient and competitive economies by switching to renewable and cleaner energy.

This would also include providing incentives to businesses and industries so as to adapt and shift to sustainable and green technologies in order to increase their competitiveness in the global markets, and create new green employment opportunities.

Anastasiades also pointed out that more than €500m – 41 per cent of the budget of the Resilience and Recovery Plan for 2021 to 2026 was devoted to investments and reforms that contribute to climate neutrality and towards green transition.

Also addressing the opening the conference, the president of the Cyprus Institute, Professor Costas Papanikolas said that the climate crisis was the greatest challenge of humanity and must be acted on immediately.

Papanikolas, who is also an advisor to the president on climate change, said that the region was a hot spot and that the climate impact would be huge, affecting half a billion people. “The climate crisis is a battle we must win quickly to prevent disaster,” he said.

EU Commissioner for the Environment, Oceans and Fisheries Virginijus Sinkevičius, in an online greeting said that the effects of the climate crisis were real in Cyprus and throughout the region and the challenges were enormous. “If we do not act now the consequences will be catastrophic,” he said.

Why does the value of Bitcoin keep increasing?

The father of Ayia Napa