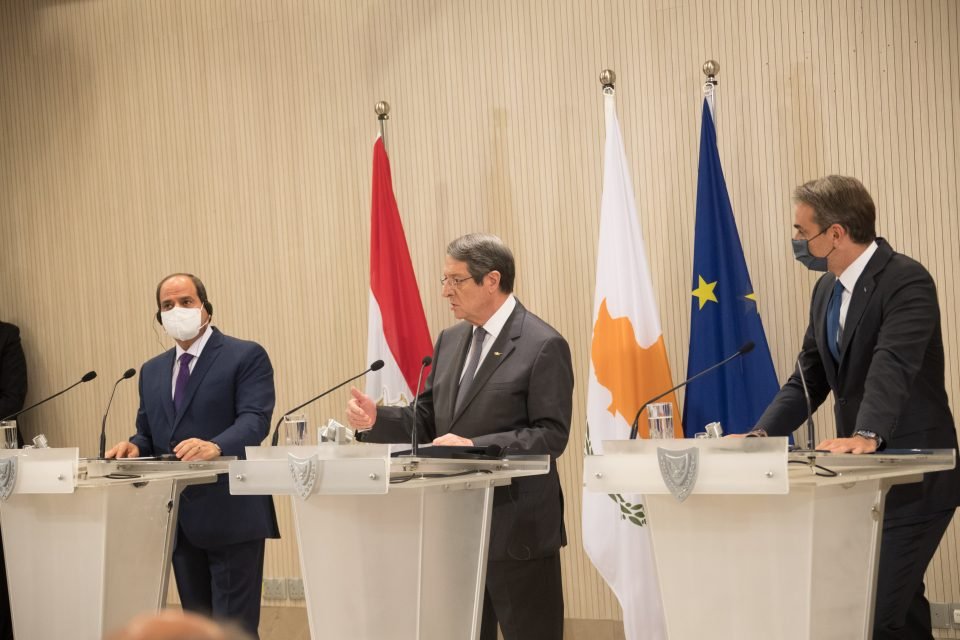 Developments regarding the Cyprus problem, cooperation in the field of energy, regional developments and a review of the trilateral cooperation between Cyprus, Greece and Egypt will take place on Tuesday in Athens.

President Nicos Anastasiades, along with Greek Prime Minister Kyriakos Mitsotakis and Egypt’s President Abdel Fatah Al-Sisi will be heading their countries’ delegations that will review the course of the trilateral cooperation and ways to further strengthen it.

Other issues to be discussed include immigration, common actions to handle the Covid-19 pandemic, climate change, energy, including electricity interconnection and transfer of natural gas as well as diaspora issues and EU-Egypt relations.

Anastasiades is scheduled to hold a bilateral meeting with his Egyptian counterpart at the venue of the summit and have another meeting later on with Mitsotakis at the Maximos Mansion.

During the trilateral meeting, memorandums of cooperation on electricity interconnection and issues regarding the three countries’ diasporas will be signed. The latter aims to establish a common framework for action with programmes to further coordinate diaspora organisations in important decision-making centres overseas.

The Minister of Energy Natasa Pilides is to also participate in the deliberations, as well as Presidential Commissioner Photis Photiou, Cyprus’ Ambassador in Athens Kyriakos Kenevezos, the Permanent Secretary of the Foreign Ministry Kornelios Korneliou and other officials.

A round table discussion will also take place on the sidelines of the trilateral meeting with the participation of representatives from energy and maritime companies to discuss the transportation of liquefied natural gas (LNG).

Cyprus and Egypt signed on Saturday a memorandum of understanding on cross-border electrical interconnection. The agreement is part of the electricity interconnection project of Cyprus, Greece and Egypt. Athens and Cairo signed a similar agreement last Thursday.

It sets the stage for an undersea cable that will transmit power produced by renewables from North Africa to Europe, the first such infrastructure in the Mediterranean.