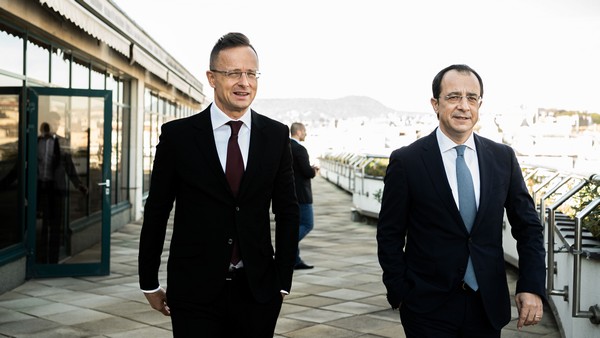 Cyprus and Hungary, as EU partners, share common concerns and challenges, Foreign Minister Nikos Christodoulides said on Tuesday after a meeting with his Hungarian counterpart Péter Szijjártó in Budapest.

The two ministers signed a Memorandum of Understanding for Political Consultations and discussed ways of expanding bilateral relations.

Christodoulides said his visit to the Hungarian capital coincides with the completion of 60 years of diplomatic relations between the two countries. “I think it was a very good time, not only to celebrate this event, but much more to determine the next steps in our bilateral relations,” he said after his meeting with Szijjártó.

He expressed hope that his visit but also the signing of the MoU of Political Consultation can be the basis for strengthening bilateral relations, “but also the deepening of our cooperation in sectors such as the economy, trade and tourism, of bringing our countries and our peoples even closer.”

The MoU, he said, lays a strong foundation for deepening cooperation and mutual understanding on a range of issues, while establishing consultations and exchanges of visits at political and official level on an annual basis.

At bilateral level, Christodoulides said they reviewed the course of the two countries’ cooperation and noted their “strong will for new initiatives that will contribute to the further development of our bilateral relations, but also of our cooperation within the European Union.”

“It is worth noting that Cyprus recognised Hungary’s vaccination certificate from a very early stage, thus facilitating travel to and from Cyprus for Hungarian citizens,” Christodoulides noted.

“As partners in the European Union, we both share common concerns and face common challenges,” Christodoulides said. As members of the large European family, he added, they realise that sometimes there may be different approaches to issues, but there is a strong desire to work together to address these challenges and find solutions for the best interest and the aspirations of each member state, but also of the EU as a whole.

In the field of migration, he said that despite some different approaches as a result also of different data in the two countries, “we agree that the instrumentalisation of migration is condemnable and measures must be taken against third countries that resort to such methods.”

Christodoulides said they also discussed developments in the eastern Mediterranean and Turkey’s ongoing violations in Cyprus both on the ground and at sea and the decision on Monday by the EU foreign ministers for the preparation of an options paper by the European External Action Service, on possible ways for the EU to respond to the fact that Turkey has not reversed any of its actions regarding Varosha.

Turkey’s violations in the Republic of Cyprus’ exclusive economic zone, impact the interests and goals of the EU and its member states, he added, as they also aim to block any prospects for the Eastern Mediterranean to develop as an alternative energy option for the bloc.