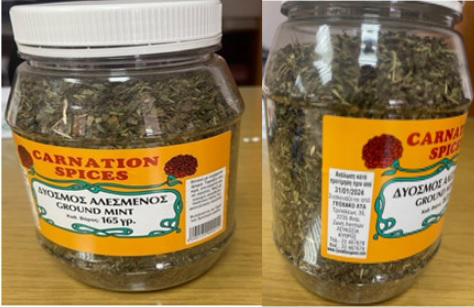 The health services on Friday said they had withdrawn a batch of peppermint tea and dried ground mint after finding traces of pesticides.

The products concerned Greek Fino brand sold under the name Menta Peppermint is a small carton box with 10 tea bags weighing 1 gramme each. The health services recalled LOT. KΚ03030 with an expiry date of December 31, 2024.

A batch of ground mint by Latsia-based Carnation spices company was also withdrawn from the market. The product is sold in a plastic container of 165 grammes with the lot number L060821 and an expiration date of 31 January, 2024.

According to the announcement, both products were recalled after traces of unauthorised pesticide “”Chlorpyriphos” were detected following tests at the accredited state general laboratories as part of the market controls.

In the second sample, residues of the pesticide allowed in the EU “Malathion” were detected, but in levels beyond the maximum acceptable limits, the health services said.

The public health service has asked retailers to remove the product from their shelves, while consumers who might have bought the above products should not consume it and return it to the shop where they got it from.