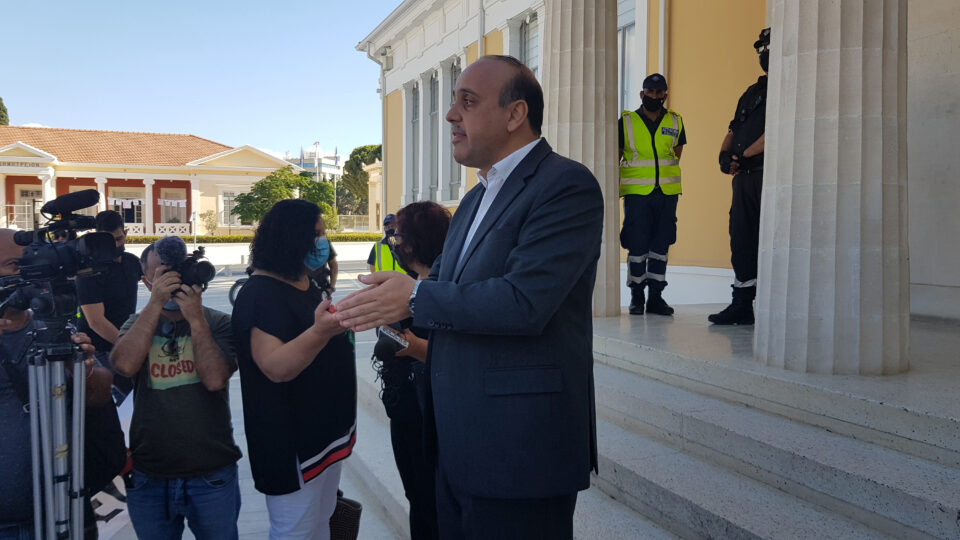 The mayor addressing the demonstrators

Era Korivos department store employees have canvassed Paphos Mayor Phedonas Phedonos for support to avert the store’s closure and save their jobs.

The court had in September given the business two months to obtain a final permit from the municipality or to close. At issue are changes to the building which the municipality has branded “arbitrary”. The shop is slated to shut down by November 14. The business has appealed the court decision.

The mayor met with delegation from the employees and later addressed the demonstrators, as he urged the company to respect the court decision.

Speaking to reporters on behalf of the employees, Constantina Sarafi said that they would be out of a job after November 14, while tens of thousands of consumers would also be affected.

She urged the mayor to consider the issue with sensitivity, noting that employees were residents of the town, and asked that the company be given more time to correct the irregularities. Sarafi said employers were willing to make these corrections.

Addressing the staff, Phedonos said that permits cannot be issued under pressure or threats. Should the municipality issue a permit, this would send the wrong message. The company could have applied for a permit by derogation, as it did for its department store in Nicosia.

The mayor urged the company to respect the court decision and show it cares for employees by quickly ending the irregularities at the building so as to secure the permits as provided by law.

And he urged employees to send a clear message to the company that it should take some steps, adding that the municipality cannot issue permits without some steps being taken first.

In a protest earlier this week employees had stressed that the department store has been operating as such since 2001 without any problems.

Paphos municipality has said Era supermarket is operating illegally as a department store “with arbitrary large-scale additions, both indoors and in the parking lot, for which a criminal case is pending before the Paphos district court”.

The company concerned, CTC Plc, on Monday called on the municipality to issue the necessary permit which the company is entitled to hold. It accused the local authority of refusing to grant the permit even though the town planning department had given the green light when asked back in 2016.

Ermes Department Stores PLC and Woolworth (Cyprus) Properties PLC said last month that the court ruling has been appealed. They also said the process regarding the building’s final approval was initiated a long time ago but was not completed, “for reasons that are not due to any fault on the part of our companies or disregard of our companies’ legal obligations, but to the handling of the entire issue on the part of the Paphos municipality.”

They said the Korivos Commercial Centre, where a mall as well as a commercially independent Superhome Centre DIY are operating, was officially inaugurated in 2001. The businesses there have been operating for about 20 years completely safely and smoothly, the companies said.