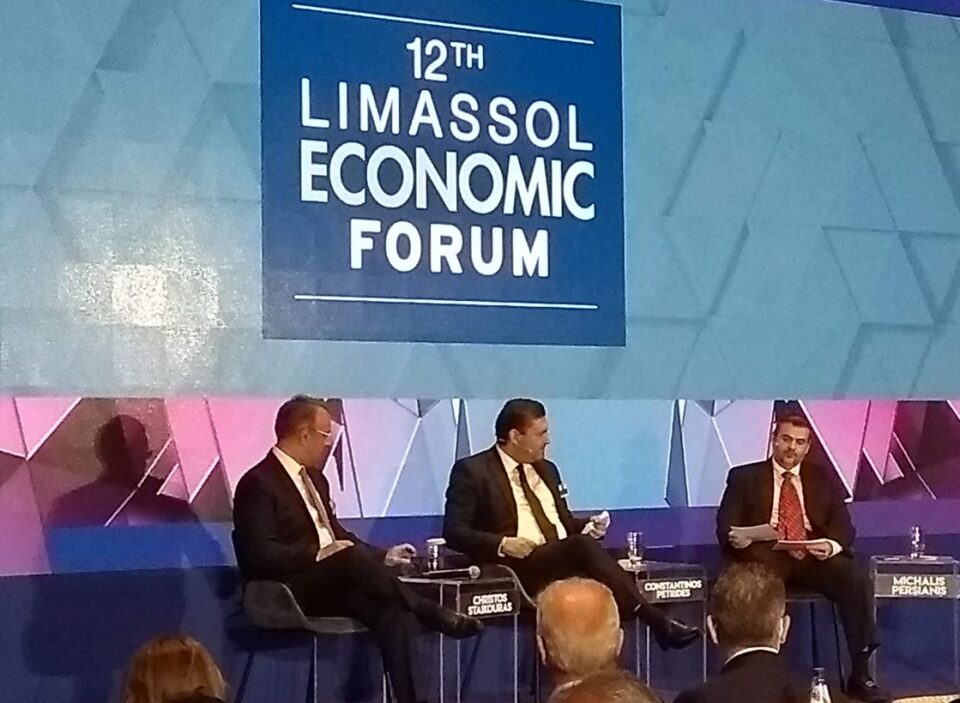 Finance Minister Constantinos Petrides said on Friday that the green transition will not be a painless process, highlighting the financial burdens it will likely incur on some sections of the population.

“There is a great challenge ahead with the European Green Deal,” Petrides said.

“Of course, we owe it to our children to clean up the planet and implement environmentally-friendly policies, however, the green transition will not be easy,” he added.

Petrides explained that certain social groups will feel the sting of higher costs, providing an example of higher taxes on fossil fuel.

“It’s easy to proclaim the various objectives and goals, such as cutting emissions by 55 per cent by 2030, but this involves tough measures,” Petrides stated.

Petrides was speaking in a panel discussion with his Greek counterpart Christos Staikouras at the annual Limassol Economic Forum, which looks at world economic trends and developments.

This year’s iteration of the event examined the effects of the pandemic, with particular focus on how this has influenced economies, businesses and monetary policies.

Another major theme was inflation, with both ministers, as well as a number of other keynote speakers, delving into its causes, current progress, and how it affects future policies.

“Politicians love all of these tools pumping money into the economy in the short term, but we must be prudent and not allow debt to spiral out of control because of the pandemic, which of course we managed to handle through spending, which was the right thing to do at the time,” Petrides said.

“We cannot rule out interest rate hikes and this will hurt borrowing capability,” he added.

Petrides said that borrowing was “not the be-all and end-all of a viable economy”, explaining business viability will be a crucial aspect of how the Cypriot economy evolves in the future.

He also detailed the government’s recent actions to increase the number of technology companies operating in Cyprus.

“We have a long-term policy which we are implementing through our budget and the various reforms we are promoting,” Petrides said.

“We want Cyprus to become a technology hub, a sector which can drive GDP growth in the next few years in a way which other sectors are not able to,” he explained.

“There are many technology professionals who want to come to Cyprus, who want to live here, want to send their children to school here, and pay taxes in Cyprus,” the finance minister added.

Answering a question on inflation and broken global supply chains during the question and answer portion of the meeting, Petrides partially attributed the problem to excess demand, which in some cases outstrips that of 2019.

“I think some disrupted supply chains will be mended but we have to remain cautious,” he said.

“There are no easy solutions, but I also think that the media overstate the issue of inflation, which itself fuels inflationary tendencies,” Petrides added.

Petrides concluded by advocating a policy of saving money when the economy is doing well and spending money during a crisis to get out of it.

“In Cyprus, we used to do the opposite, but we have moved away from such an approach,” he concluded.

Staikouras was on the same wavelength as Petrides saying the two had a more conservative outlook than the broader economic consensus when it came to growth and spending.

“We are pursuing high growth over the next few years, but that is not enough,” the Greek finance minister said. “Growth must be sustainable and viable, we need to increase the quality of investments and wealth,” he added.

Staikouras explained that according to European Central Bank (ECB) data, Greece will have an investment rate approximately 10 per cent higher than the European Union average of 5 per cent in the next year.

Regarding Greece’s fiscal policy, he said that the country has to be prudent while at the same time decreasing tax burdens on citizens where possible.

“We have a duty to support households and businesses for as long as there are crises and that is why the cutting off of measures has been gradual rather than abrupt,” he said.