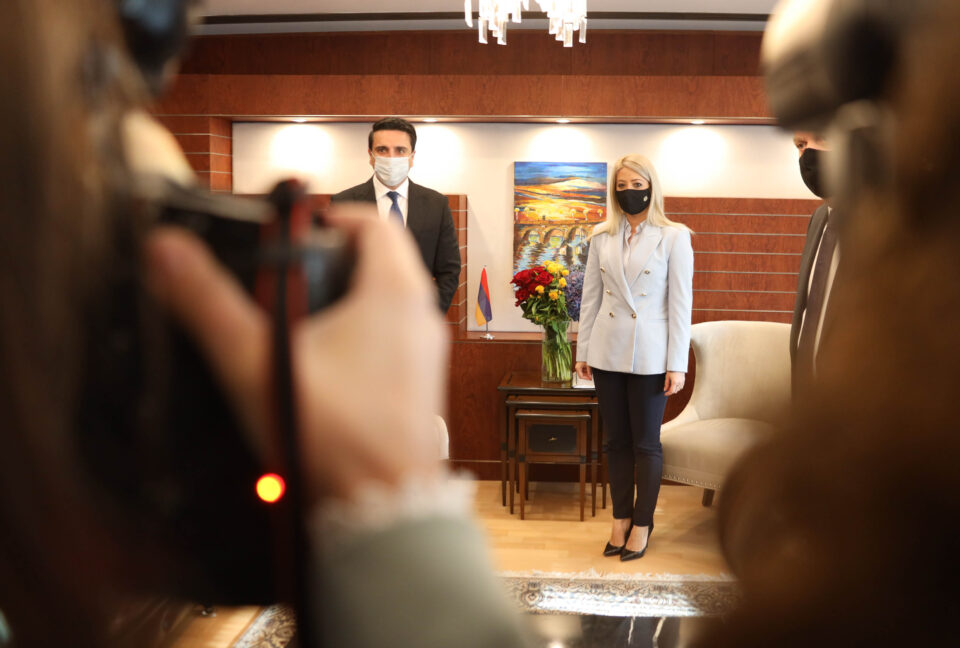 House president Annita Demetriou and Vice President of the National Assembly of Armenia Alen Simonyan reaffirmed the bonds and cooperation between Cyprus and Armenia during a meeting in Nicosia on Monday.

Simonyan said he was pleased with the collaboration between the two countries in international forums, stressing the importance of collaborating on an interparliamentary level.

“The Armenian side will do everything in its power to further deepen interparliamentary collaboration between our two countries, to benefit them and their peoples,” he said.

He added that during the meeting, he and Demetriou discussed political issues occupying their respective countries, namely the Nagorno-Karabakh dispute and the Cyprus problem.

Simonyan thanked the Cypriot parliament for unanimously condemning Azerbaijan’s violation of the ceasefire in Nagorno-Karabakh, also reminding that Cyprus was the first country to internationally recognise the Armenian genocide.

He also reiterated “Armenia’s total support for a peaceful solution to the Cyprus problem, based on a bizonal-bicommunal federation”.

Simonyan also accompanied Demetriou on a tour along the Green Line in the centre of Nicosia.

As Cyprus and Armenia are both victims of Turkey’s intransigence, it is vital that they establish stronger bonds on an interparliamentary, international and European level, Demetriou said.

She also said that talks between Armenia, Cyprus and Greece will begin as soon as Simonyan’s official visit to Cyprus is over.

“Through a common strategy, we can face any challenge, big or small,” she said, “but also strengthen our voices on European and international matters so that we can put forth our common principles”.