The RELIONMED-Life project has issued an invitation for people to participate in the eighth and final lionfish removal derby, which will be held in an effort to control the invasive species’ presence in Cypriot waters.

The project launched in 2017 and is aimed at monitoring and controlling the population of lionfish off Cyprus, with Removal Action Teams (RATs) of volunteer divers intervening to remove them when necessary.

In addition to this, the project management team has been organising and supervising lionfish removal rallies in priority areas, with prizes for the highest-ranking participants.

Prize categories include the most fish, the heaviest fish and the smallest. 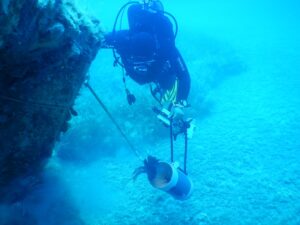 As no predators have been identified for the lionfish, scientists have observed it rapidly reproducing in the Mediterranean.

According to the researchers working on the project, the lionfish is a “ferocious and rapid invader” that can significantly disrupt the biodiversity of regions it invades, consuming mainly native fish and invertebrates.

In Cyprus, this includes species of commercial value, which could impact local fishing stocks.

The eighth and final rally will be held on November 7 at Konnos Bay, and those interested in participating can fill out this form.

Equipment will be provided. The competition is only open to scuba divers.