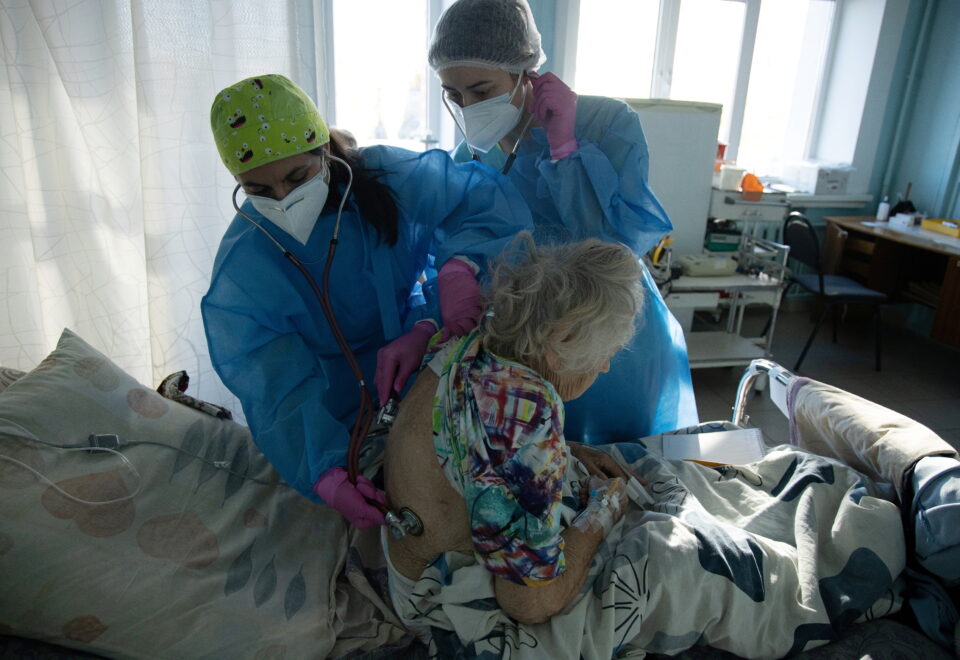 Polish COVID cases surge above 8,000 for first time since April

Poland reported 8,361 daily COVID-19 cases and 133 deaths on Wednesday, the health ministry said, with the number of new cases reaching the highest level since late April.

Central and eastern Europe, where vaccination rates are lower than in the west of the continent, has seen a surge in cases in recent weeks, with officials in Poland urging the public to get vaccinated and follow the restrictions in place.

Britain reported 263 deaths within 28 days of a positive COVID-19 test on Tuesday, the highest daily total reported since March 3 following a steady rise in cases in the last month, according to government data.

Another 40,954 cases were reported, a rise on Monday’s 36,567, although the running total for the last seven days had flattened,

Bulgaria’s tally of coronavirus infections has risen by 6,813 in the past 24 hours, a record daily increase as the European Union’s least vaccinated country grapples with a fourth wave of the pandemic, official data showed on Wednesday.

The virus has killed 124 people in the past 24 hours, according to the figures, bringing the total death toll to 23,440.

More than 7,300 people were in COVID-19 wards as hospitals across the Balkan country struggled to deal with the inflow of coronavirus patients amid a shortage of medical staff.

The interim government imposed a health pass entry to most indoor public venues in a bid to slow the spread of the more contagious Delta variant and spur vaccinations in the country, where only one in four adults has had at least one shot.

Vaccine take-ups have quadrupled since the pass was made mandatory last Thursday. More than 26,000 new doses were administered in the past 24 hours, bringing the total number of vaccinated adults to 1.46 million people.

But many Bulgarians remain sceptical about the shots amid entrenched mistrust in state institutions, misinformation and contradictory messages by politicians and experts ahead of a third parliamentary election this year on Nov. 14.

Vaccine opponents have held rallies against the health pass over the past days and a new national protest, organised by restaurants and hotel owners, is planned for Thursday.

Late on Tuesday, interim Health Minister Stoicho Katsarov said the situation at hospitals was critical and appealed to Bulgarians to observe the restrictions. Out of 700 intensive care beds across the country, 608 are occupied.

“If these measures do not work, the only option left will be a full lockdown and a halt of economic life,” Katsarov said.

Czech daily COVID-19 cases top 6,000 for first time since April
The Czech Republic reported 6,274 new COVID-19 cases on Wednesday, almost doubling in a week as the country struggles to contain a new wave of the pandemic.

The latest number is the highest since April 7 in the country of 10.7 million.

Hospitalisations have risen to 1,146 as of Oct. 26, up from 249 at the start of the month, with 166 people in intensive care, data from the Health Ministry showed.

Despite the rapid growth, cases and hospitalisations are still well below peak levels of early 2021 and the end of last year.

Vaccination has been gathering pace after a slowdown, with 6.06 million people fully vaccinated.

Ukraine’s health minister urged more people to get their COVID-19 shots as coronavirus deaths hit a daily record of 734 on Tuesday, with hospitalisations up more than a fifth on the previous week.

One of Europe’s poorest countries, Ukraine fell behind in the race for vaccine supplies this year and so far only around 7 million in a population of 41 million are fully vaccinated.

It is one of several countries in former communist eastern Europe, where vaccination rates are the continent’s lowest, now experiencing a record-setting wave of infections with some of the highest death rates in the world.

In a bid to combat vaccine hesitancy, Ukraine has made vaccinations compulsory for some government employees such as teachers. The unvaccinated face restrictions on access to restaurants, sports and other public events.

Italy reported 48 coronavirus-related deaths on Tuesday against 30 the day before, the health ministry said, while the daily tally of new infections rose to 4,054 from 2,535.

Italy has registered 131,904 deaths linked to COVID-19 since its outbreak emerged in February last year, the second-highest toll in Europe after Britain and the ninth-highest in the world. The country has reported 4.75 million cases to date.

There were 37 new admissions to intensive care units, up from 16 on Monday. The total number of intensive care patients rose to 341 from a previous 338.

Sweden has registered 9 new COVID-19 deaths since Friday, pushing the death toll since the start of the pandemic past 15,000, data showed on Tuesday.

The grim milestone was reached with deaths having started to creep up again after a summer lull in the pandemic, although they remain far below the peak levels seen last winter.

Sweden registered 2,275 new cases since Friday. On Tuesday 25 people were treated at intensive care units, down from 32 one week ago.

While case loads have fluctuated somewhat, the Nordic country has so far not seen a spike in infections of the magnitude recorded in some other European countries, such as Sweden’s Baltic neighbours, in recent weeks.

Around 85% of all Swedes aged 16 and above have received a first vaccine jab and 80% have had two shots or more.

Sweden, which has spurned lockdowns, was hit hard by the first two waves of the pandemic and saw deaths per capita many times higher than in other Nordic countries, although lower than in most European countries.

Hungary reported a jump in daily COVID-19 cases to 3,125 on Wednesday, its highest daily tally since April, the government said, urging people to take up vaccines that are widely available nationwide.

Hungary has seen a steady increase in infections over the past weeks – with Wednesday’s numbers jumping from 1,668 daily new cases a week ago – but its daily new infections still remain below the numbers elsewhere in central and eastern Europe.

Hungary, a country of 10 million, has reported 30,647 deaths since the start of the pandemic. More than 5.7 million people have been fully vaccinated against the virus so far, and more than 1.1 million have received a third, booster shot.

The region has the European Union’s lowest vaccination rates, an unwelcome distinction in which both political and economic factors play a role, and deadlier variants of the virus are spreading there fast.

Neighbouring Romania is at the forefront of the fresh wave of COVID-19 sweeping across the region, with one of the world’s highest mortality rates and hospitals struggling to cope.

In Hungary there are still no restrictions, and mask wearing is not mandatory in closed spaces, only in healthcare facilities.