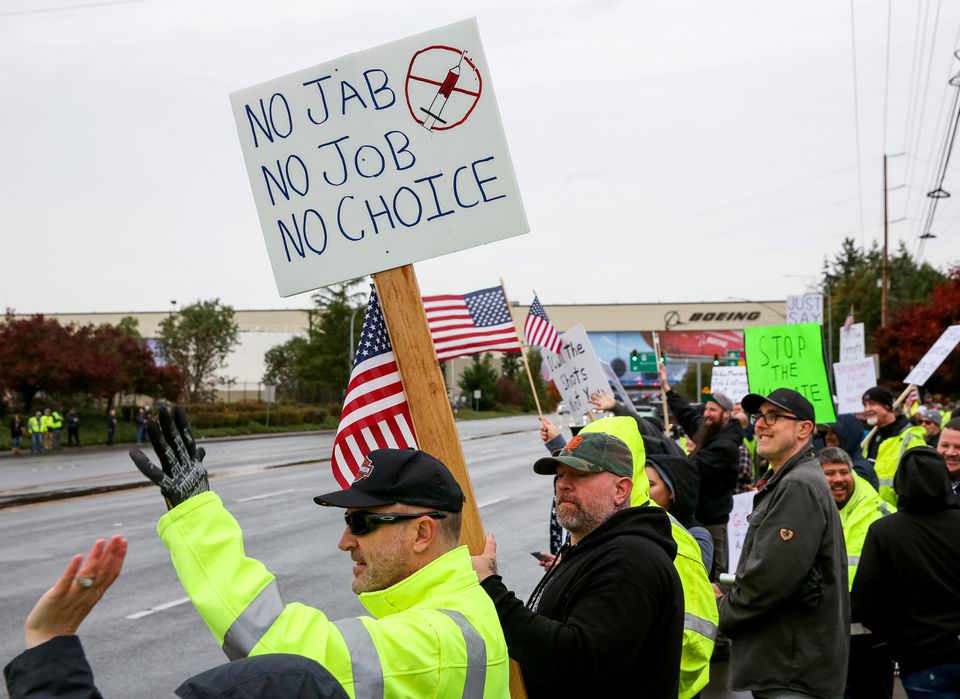 In Wichita, Kansas, nearly half of the roughly 10,000 employees at aircraft companies Textron Inc (TXT.N) and Spirit AeroSystems (SPR.N) remain unvaccinated against COVID-19, risking their jobs in defiance of a federal mandate, according to a union official.

“We’re going to lose a lot of employees over this,” said Cornell Beard, head of the local Machinists union district. Many workers did not object to the vaccines as such, he said, but were staunchly opposed to what they see as government meddling in personal health decisions.

The union district has hired a Texas-based lawyer to assist employees and prepare potential lawsuits against the companies should requests for medical or religious exemptions to vaccination be denied.

A life-long Democrat, Beard said he would no longer vote for the party. “They’ll never get another vote from me and I’m telling the workers here the same thing.”

The clock is ticking for companies that want to continue gaining federal contracts under an executive order by Democratic President Joe Biden, which requires all contractor employees be fully vaccinated against COVID-19 by Dec. 8.

That means federal contract workers need to have received their last COVID-19 shot at least two weeks before the deadline to gain maximum protection, according to US government guidance.

With a three-week gap between shots of the Pfizer (PFE.N)/BioNTech vaccine, workers must get the first jab by Wednesday. If the government holds fast to its deadline, it is already too late to choose Moderna’s (MRNA.O) vaccine, which is given in two doses four weeks apart. Workers could opt to get Johnson & Johnson’s (JNJ.N) single-shot vaccine until Nov. 24 to meet the deadline.

Vaccines remain by far the most effective way to prevent COVID-19 hospitalizations and deaths, particularly faced with the extremely contagious Delta variant of the virus that can cause infections even among those fully vaccinated.

Despite vocal opposition from some, vaccine mandates have been effective at shrinking the rates of the unvaccinated and convincing the reluctant to roll up their sleeves.

Several big employers such as Procter & Gamble (PG.N), 3M (MMM.N) and airlines including American Airlines (AAL.O) and JetBlue (JBLU.O) have imposed mandates. In some industries, including among food workers, unions have supported vaccine requirements.

But the mandate has stirred protests from workers in industries across the country, as well as from Republican state officials.

Opposition to the mandate could potentially lead to thousands of US workers losing their jobs and imperil an already sluggish economic recovery, union leaders, workers and company executives said.

More legal clashes are likely over how companies decide requests for vaccination exemptions.

For the companies, time is getting tight, though the Biden administration has signaled federal contractors will not have to immediately lay off unvaccinated workers who miss the Dec. 8 deadline.

Under government guidance published on Monday, companies will have flexibility over how to implement the mandate, which may allow them to avoid mass firings.

“A covered contractor should determine the appropriate means of enforcement with respect to its employee,” the guidance said.

For Boeing Co (BA.N) in the United States, more than 7,000 workers have applied for religious exemptions and around 1,000 are seeking medical exemptions, people familiar with the matter told Reuters. That amounts to some 6 per cent of the planemaker’s roughly 125,000 US employees.

“The mandate is illegal, immoral and impractical,” said one veteran Boeing program analyst who attended the rally. “We are standing together against a company and government trampling on our rights.”

Many legal experts have said vaccine mandates in the interest of public health are legal. The US Supreme Court has rejected several challenges to mandates, with the high court last week turning away a healthcare worker who sought a religious exemption to a COVID-19 vaccine mandate.

The rebellion has put Boeing executives in a bind. The company could lose skilled staff, but must comply with a presidential order.

A Boeing spokesperson said the company was committed to maintaining a safe working environment for its employees.

The order’s provision for religious and medical exemptions is causing more tension.

Two Textron workers who requested religious exemptions told Reuters the company’s human resources representatives quizzed them on the name of their church leaders and asked detailed questions about their faith.

Textron declined to respond to questions, but in a statement said it was obligated to comply with Biden’s order and was taking steps to do so.

“Employees who are unable to receive the COVID-19 vaccination due to a medical condition or sincerely held religious belief are being provided an opportunity to request an accommodation from this requirement,” Textron said.

Spirit AeroSystems did not respond to a request for comment.

A group representing FedEx Corp (FDX.N), United Parcel Service Inc (UPS.N) and other cargo carriers said it would be virtually impossible to have all their workforces vaccinated by the deadline.

Mercedes-Benz USA, the US unit of German carmaker Daimler AG (DAIGn.DE) which is not a US government contractor, told employees in an October email seen by Reuters that proof of vaccination against COVID-19 would become a condition of employment beginning Jan. 4.

The carmaker said it implemented the move in anticipation of a separate US government vaccine mandate that would apply to businesses with at least 100 employees, affecting some 80 million workers nationwide.

Less than half of the company’s workers at US import processing centers are vaccinated and many refuse to get a shot, according to a source familiar with the matter.

Mercedes USA in a statement said it had given employees 90-day notice to fulfill the requirement, adding that two thirds of its US employees – not including factory workers in Alabama – have provided proof of vaccination to date.

“We expect that the vast majority of our employees will provide proof of vaccination before the deadline,” the company said.