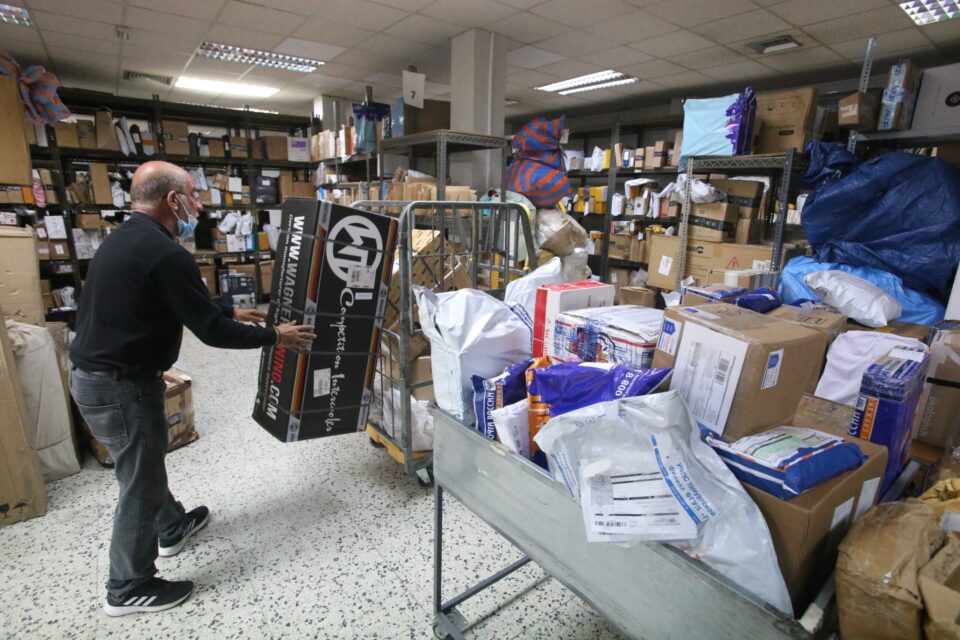 The Post Office is urging shoppers to place online orders as quickly as possible to ensure deliveries in time for Christmas and avoid the long delays experienced last year.
Amid a background of disruptions triggered by the coronavirus pandemic, last winter saw Cypriot consumers standing in hour-long queues to pick up parcels they had ordered weeks, even months before.
This year, the Post Office is doing its best to leave the queues in the past, but for those looking to get presents under the Christmas tree on time, the best time to start placing online orders is right now, postal services deputy director Pavlos Pavlides told the Sunday Mail.

Chaos reigned when the Sunday Mail last reported on the state of the postal service back in February. A combination of Covid and Brexit hit worldwide trade hard, with one making deliveries a logistical nightmare as a result of reduced flights, and the other creating additional borders for trade with the UK in the form of duties and customs. For Cypriot consumers, this translated into massive delivery delays for orders coming from both the EU and the UK which created backlogs in ports and post offices and a general disillusionment with the postal service.

Pavlides said that Cypriots have generally changed their online shopping habits in the past eight months, with the most notable changes being in where they shop from. Countries like Germany, Belgium, France and the Netherlands are all popular seller locations as they are within the EU and shipping is usually quick and easy. Since Brexit has reduced the UK to the Post Office’s ‘third country’ list, people are keen to avoid having to pay customs and other duties for their goods.

“I’ve generally been avoiding ordering from the UK post-Brexit,” veteran online shopper George Andreou told the Sunday Mail. A father of a young child, he has depended for years on online purchases of books, toys and other gadgets he couldn’t find in Cyprus – which became increasingly difficult in the past year. He added that his first choice lately has been Amazon Germany as it’s reliable and within the EU.

Of course, some logistical issues remain and are contingent upon individual country policies. “We have been informed by Germany that as of November 18 all items delivered from the country will arrive by boat once a week,” Pavlides said. This means that a parcel from a German seller is not likely to be dispatched immediately, but rather once the container destined for Cyprus has filled up and been sent to Piraeus, from where it will sail to the island.

“If let’s say your order reaches the country on December 2 – one of the scheduled freight dates – that means it was probably dispatched as early as November 12, or 15,” Pavlides said. “So if someone sees their parcel has been dispatched but then it takes two or three weeks to arrive, they immediately think the delay is our fault. In reality, their parcel is sitting in a container waiting to be shipped off.”

Under normal circumstances, orders would arrive by plane but given flights are not as frequent as they used to be, this system is more convenient for German authorities – but not so much for our postal workers.
“This was much easier to manage, even when it created small backlogs during weekends. Now having to process and distribute one, two, four containers’ worth of parcels all at once will of course take some time,” Pavlides said, recommending that people place their orders for Christmas sooner rather than later.

As of July, VAT regulations have applied for online shopping across the EU and beyond. In simple terms, the main change is that when buying online – both in and out of the EU – consumers are charged the VAT of their home country (19 per cent in Cyprus’ case), and not the country of origin. This has been done in efforts to reduce red tape by requiring sellers and marketplaces to register for VAT just once rather than in multiple countries.
For sellers outside the EU this is done through the so-called Import One Stop Shop (IOSS), which aims to simplify the declaration and payment of VAT. The IOSS allows sellers to declare and pay the VAT to the tax authorities, instead of making the buyer pay when they receive their goods, as was previously the case. This applies to items with a value of €150 and lower and is supposed to make the process easier for consumers by charging them VAT at the time of purchase, theoretically eliminating surprise fees when the goods are delivered.

But for this to apply, the seller needs to be registered in the IOSS and include their registration number in the customs declaration – otherwise, the buyer still needs to pay the VAT when receiving their package, and a customs fee charged by the transporter – in this case, the Cyprus Post.
“People complain when this happens because sometimes their invoice may include VAT, so they don’t expect to be charged again,” Pavlides said.

Since joining the IOSS isn’t mandatory, many sellers have yet to comply, which creates these kinds of complications – meaning that that it’s not the public’s fault when this happens. Pavlides says it should be declared somewhere on the seller’s website if they are IOSS registered.

At the end of the day the regulation changes require action from the sellers, not the buyers. “It’s a new process, so there will be some ups and downs,” he said. “People need to be informed so they can understand why certain things happen.”

The delivery process can also be further delayed if sellers mislabel parcels or fail to include the correct documentation. As an example, Pavlides said the Post Office recently came across several cases where packages shipped from the Netherlands actually originated from non-EU countries, like China, meaning they had to be cleared through customs.

“Inevitably this requires us to print a customs declaration and process it, which wastes everyone’s time.”

WAYS TO AVOID THE QUEUES:
1. THALIS
Introduced in the past year, THALIS is a “holistic postal system” aiming to facilitate the distribution of postal items by digitising some of its aspects. At first it only served UK deliveries but according to Pavlides, more countries were gradually added, with more plans for EU member states to join the list.
Through the THALIS Upload & Payment Platform (THALISUPP), recipients can digitally upload the documents required for their package to go through customs – like invoices – before the item arrives in Cyprus. Through the same platform it’s also possible to pay duties and taxes in advance, thus avoiding post office queues and getting the opportunity to opt for home delivery if the item is not bulky.
People can register to the platform on https://thalisupp.cypruspost.post

2. Couriers
Another way to circumvent the queues is to completely skip conventional postage and use a courier instead. Even though many large online retailers collaborate with couriers by default, Andreou said that for those who don’t he uses Aramex Shop and Ship. Through the service, people can send their orders to forwarding addresses around the world, so they can then be sent to them via courier. For example, an order from a seller based in the US would be sent to a Shop and Ship address in the same country, and then sent to the buyer via the courier service. Customs duties still apply, but it’s a much faster way to shop online without having to rely on postal schedules.