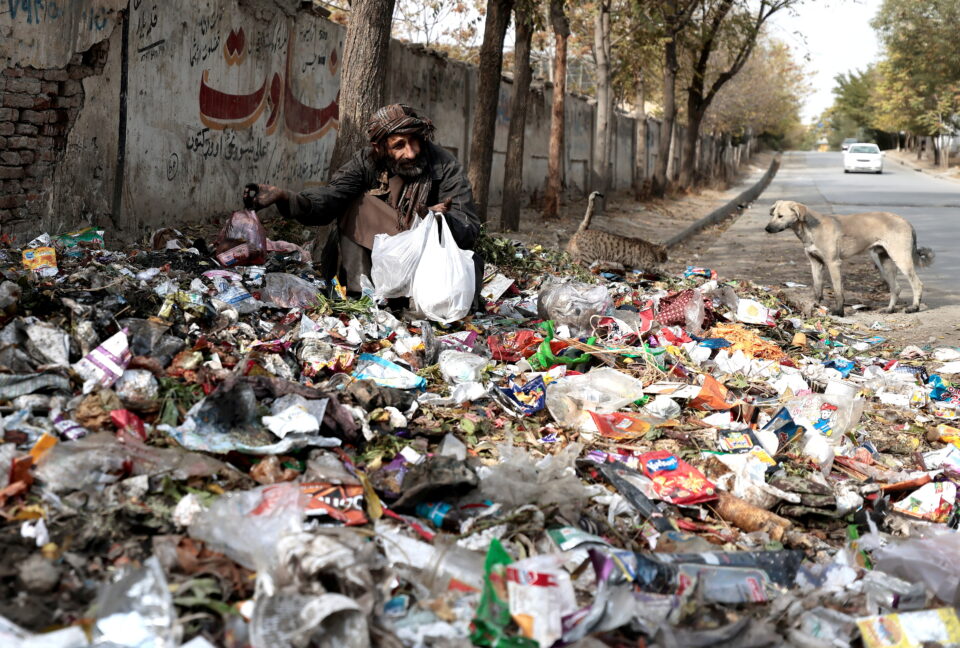 An Afghan man scavenges for items among garbage in Kabul,

The first snow of the winter will reach Kabul any day now, and the death rate will start to climb: mostly children, at first, but it will not really be the cold that kills them. The cold will only finish the work that malnutrition began months or years ago – but the other cause of their deaths will be a different kind of freeze.

Most famines are really a direct and sometimes deliberate result of war, like the current blockade of landlocked Tigray by the Ethiopian and Eritrean regimes and the blockade of Yemen by Saudi Arabia and its regional and Western allies. But it’s the end of a war that is causing acute hunger in Afghanistan.

There was a drought in Afghanistan in the last couple of years of the American occupation, so many poor Afghans were already vulnerable before the events of last summer. (It’s always the poor who go hungry or starve when food is scarce and the prices go up.) But the proximate cause of the impending famine was the chaos of the US evacuation in August.

As the panic played out on American screens and the sense of humiliation mounted, the Biden administration made one thing clear. “Any Central Bank assets the Afghan government have in the United States will not be made available to the Taliban,” said an administration official on 15 August – and with that famine became inevitable.

It’s understandable that the US government and US-dominated institutions like the World Bank and the International Monetary Fund stopped pouring aid into Afghanistan after the Taliban took power. That posed a big problem for the new regime, because foreign aid covered three-quarters of public spending in the country, but it was hardly a surprise.

It’s a whole different thing to freeze all Afghanistan’s own money that is deposited with American and other Western banks. ($9.5 billion for the US alone.)  It’s mostly unspent aid money that the previous regime hadn’t spent or stolen yet, but it’s still Afghan money and it now belongs to the new government of Afghanistan: the Taliban.

That’s the freeze that really matters. Afghanistan’s domestic economy has virtually collapsed, but there’s enough money in those frozen accounts to pay for imported food that would see 40 million Afghans through the coming winter without many deaths from starvation. So why won’t the US government release it?

Cynics would suggest that it’s because the United States never forgives governments and countries that successfully defy it, and point to Cuba as Exhibit Number One: a sixty-year trade embargo. But cynicism is wicked. We should accept Western countries’ explanation for holding onto Afghanistan’s money at face value.

Joe Biden avoids addressing this issue himself, but State Department Ned Price said last month that these funds are among the “carrots and sticks” that the US has to influence the Taliban’s conduct.

Another administration official said that “releasing the reserves is no guarantee that the Taliban will actually use it effectively to solve problems.” And UK prime minister Boris Johnson explained that “we can’t…write a completely blank cheque to the Taliban authorities, we need to ensure that that country does not slip back into being a haven for terrorism and a narco-state.”

Who do these people think they are? It’s Afghanistan’s money, and some Afghans are already starving. What right do they have to hold onto the money until Afghanistan proves that it won’t be ‘a haven for terrorism’? How could the Taliban prove it won’t become one, and how long would that take? Until the first million starve? The second million?

Besides, there are probably people in the State Department, and there certainly are in the American intelligence services, who suspect that the Taliban have never been involved in any attacks on the US homeland.

Washington has claimed for 20 years that the Taliban were aware of Osama bin Laden’s plans for the 9/11 attacks beforehand, but there has never been any proof and it just doesn’t make sense. Bin Laden didn’t use Afghan territory for the attack, and it would have been a profound breach of security to let the Taliban know about it ahead of time.

This narrative has served America’s purposes in the past and it continues to serve them now, but the current purpose is simply to punish the Taliban for winning. It’s a shabby way to behave, but great powers often behave like spiteful children when there’s no great penalty for doing so.

“The money belongs to the Afghan nation. Just give us our own money,” said finance ministry spokesperson Ahmad Wali Haqmal last week. “Freezing this money is unethical and is against all international laws and values.” But the money will stay frozen, and soon winter will come to Afghanistan.