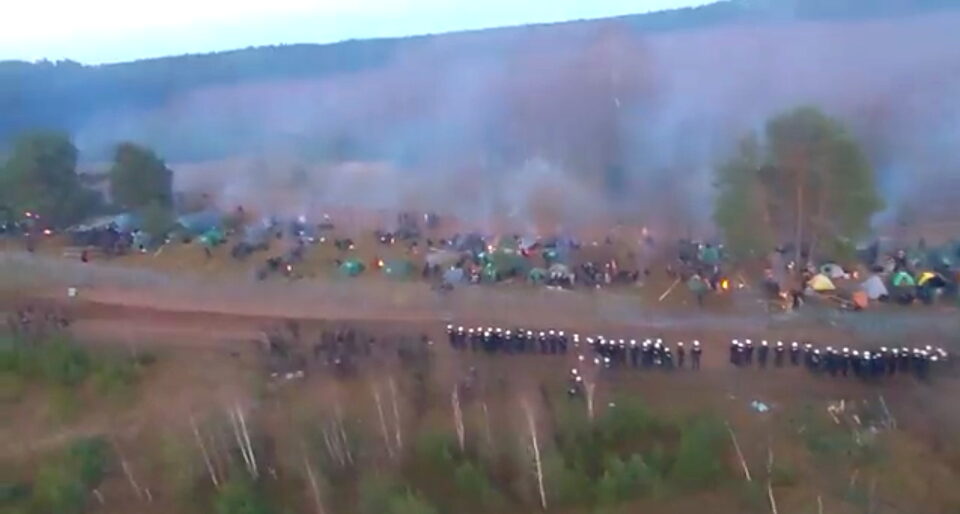 Hundreds of migrants camp in tents on the Polish/Belarus border near Kuznica Bialostocka, Poland, in this video-grab released by the Polish Defence Ministry, November 8, 2021. MON/Handout via REUTERS THIS IMAGE HAS BEEN SUPPLIED BY A THIRD PARTY

Hundreds of migrants shivered in freezing temperatures and huddled round campfires on the Belarusian border with Poland on Tuesday in front of razor wire fences and lines of Polish border guards blocking their entry into the European Union.

Polish authorities were bracing for further clashes after some migrants used logs, spades and other implements on Monday to try to break down a border fence, escalating a months-long crisis that has prompted calls for tighter sanctions on Minsk.

Poland and other EU member states accuse Belarus of encouraging illegal migrants from the Middle East, Afghanistan and Africa to cross the border into the EU in revenge for sanctions already slapped on Minsk over human rights abuses.

“The Belarusian regime is attacking the Polish border, the EU, in an unparalleled manner,” Polish President Andrzej Duda told a news conference in Warsaw.

“We currently have a camp of migrants who are blocked from the Belarusian side. There are about 1,000 people there, mostly young men. These are aggressive actions that we must repel, fulfilling our obligations as a member of the European Union.”

Belarusian President Alexander Lukashenko’s government, which is backed by Russia, denies manufacturing the migrant crisis and blames Europe and the United States for the plight of the people stranded at the border.

The European Commission said on Tuesday Belarus was taking a “gangster-style” approach to the issue by illegally offering migrants easy entrance into the EU via its territory. It said more sanctions against Minsk were on the way.

“The citizens of these countries (in the Middle East and elsewhere) are being misused, are being made victims by state-sponsored activities,” a Commission spokesperson told a briefing.

The United Nations refugee agency UNHCR also called for an end to the use of vulnerable as political pawns.

A spokesman for Poland’s special services, Stanislaw Zaryn, said Belarusian security personnel were “firing empty shots into the air, simulating dangerous events” to further destabilise the situation at the border.

“We also know the Belarusian authorities are helping migrants to destroy the border barriers. We see how they bring them tools to cut wires… to destroy the fence,” he added.

Polish Prime Minister Mateusz Morawiecki visited the area early on Tuesday to show support for the thousands of additional soldiers, police and border guards deployed there.

Footage published by the Polish police on Tuesday showed migrants’ tents and campfires on the Belarusian side of the barbed wire fence. Poland’s Border Guard said it had registered 309 attempts to cross the border illegally on Monday and 17 people, mainly Iraqis, had been detained.

EU member states trace the roots of the migrant crisis to Belarus’s contested presidential election in 2020 in which Lukashenko claimed a sixth successive term, triggering mass street protests that were violently quelled by security forces.

The United States, the EU and Britain then imposed sanctions on Minsk. They have accused Lukashenko and his security forces of encouraging and sometimes shepherding the migrants to cross the EU border through Poland and Lithuania in a form of hybrid warfare in revenge for the sanctions.

The Kremlin on Tuesday praised what it called the “responsible” work of Belarusian security personnel at the border and said it was in close contact with Minsk over the crisis. It called on all sides to act responsibly.

Humanitarian groups accuse Poland’s ruling nationalists of violating the international right to asylum by pushing the migrants back into Belarus instead of accepting their applications for protection. Poland says its actions are legal.

A poll by IBRiS for Polish daily Rzeczpospolita this week showed some 55% of Poles believe migrants who have illegally crossed the border should be pushed back, while a third don’t.

Poland says seven migrants to date have been found dead on its side of the border, with reports of more deaths in Belarus.

Djokovic wants to coach when he calls time on career