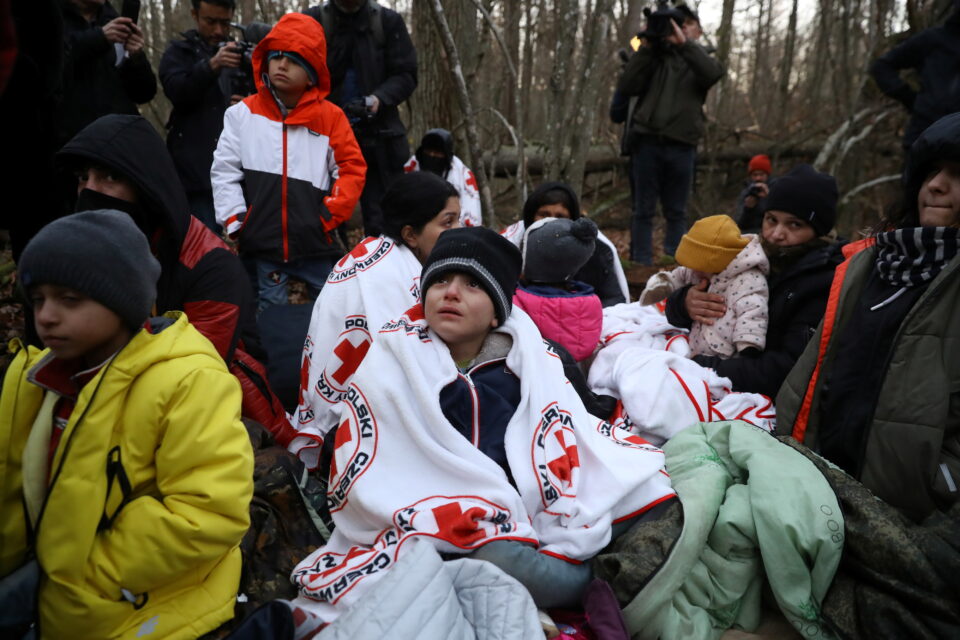 Migrants are surrounded by journalists in a forest near the Polish-Belarusian border outside Narewka, Poland November 9, 2021. The group of migrants was later guided out of the forest by Polish border guards and taken to a detention centre. REUTERS/Kacper Pempel

Migrants trapped in Belarus made multiple attempts to force their way into Poland overnight, Warsaw said on Wednesday, announcing that it had reinforced the border as the European Union prepares to impose sanctions on Belarus over the crisis.

The bloc’s 27 ambassadors are set to agree on Wednesday that the growing numbers of migrants flying to Belarus to reach the EU border amount to “hybrid warfare” by President Alexander Lukashenko – a legal basis for new sanctions.

“But the European Union cannot be blackmailed,” Maas said.

The EU accuses Belarus of encouraging the migrants – from the Middle East, Afghanistan and Africa – to try to illegally cross the frontier in revenge for earlier sanctions imposed on Minsk over human rights abuses.

Lukashenko has denied using the migrants as weapons. His close ally, Russia, suggested on Tuesday the EU should pay him to keep the migrants from attempting to cross.

Thousands of people have converged on the border this week, where razor wire fences and Polish soldiers have repeatedly blocked their entry. Some of the migrants, who are stuck in freezing conditions with little food or shelter, have used logs, spades and other implements to try to break through.

“It was not a calm night. Indeed, there were many attempts to breach the Polish border,” Polish Defence Minister Mariusz Blaszczak told broadcaster PR1.

Video from the border obtained by Reuters showed young children and babies among the people stuck there.

“There are lots of families here with babies between two or four months old. They have not eaten anything for the past three days,” the person who provided the video told Reuters, saying they were a migrant themselves and declining to be named.

The Polish border guards service reported 599 illegal border crossing attempts on Tuesday, with 9 people detained and 48 sent back. Blaszczak said the force of Polish soldiers stationed at the border had been strengthened to 15,000 from 12,000.

After midnight, two groups of migrants were turned back. One that was around 200 people near the town of Bialowieza and another of around two dozen was turned back near Dubicze, a spokeswoman told Reuters.

Neighbouring EU state Lithuania, which followed in Poland’s footsteps by imposing a state of emergency at its border on Tuesday, reported 281 migrants were turned back that day, the highest figure since August when such pushbacks began.

The EU accuses Lukashenko of using “gangster-style” tactics in the months-long border standoff, in which at least seven migrants have died. The new EU sanctions would target around 30 individuals and entities including the Belarusian foreign minister, three EU diplomats told Reuters.

Lukashenko’s government blames Europe and the United States for the plight of the people stranded at the border. Russia on Wednesday accused the EU of failing to uphold its own humanitarian values and trying to “strangle” Belarus.

The crisis erupted after the EU, United States and Britain imposed sanctions on Belarus over its violent crackdown on mass street protests that were sparked by Lukashenko’s disputed election victory in 2020.

Poland denies accusations by humanitarian groups that it is violating the international right to asylum by hustling migrants back into Belarus instead of accepting their applications for protection. Warsaw says its actions are legal.

Some migrants have complained of being repeatedly pushed back and forth by Polish and Belarusian border guards, putting them at risk of exposure, lack of food and water.

“Yesterday we helped to secure and evacuate one group of immigrants,” said Michal Swiatkowski, 30, a member of the Polish Red Cross rescue group from Ostrowiec Swietokrzyski.

“There were 16 people, most of them were children. They did not require medical attention, although we donated warm clothes, blankets and some food,” he told Reuters.

Second suspect arrested after more than 2kg of cannabis seized