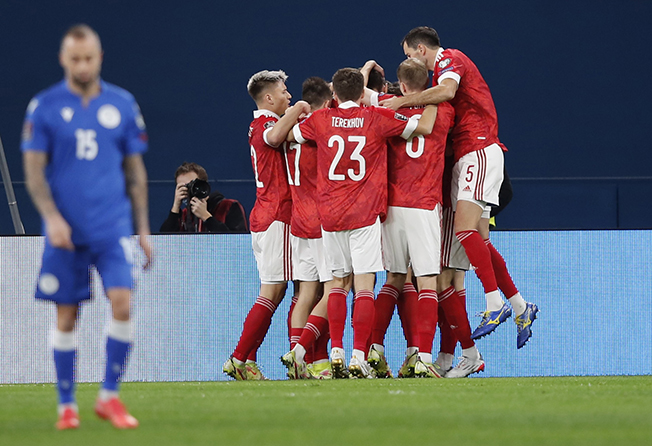 Cyprus were completely outclassed by the Russians

Russia struck five second-half goals as they routed visiting Cyprus 6-0 in their Group H World Cup qualifier on Thursday ahead of a decisive clash with Croatia this weekend for an automatic berth in next year’s tournament in Qatar.

The Russians top the group on 22 points from nine games, two ahead of 2018 World Cup runners-up Croatia who stayed in contention to leapfrog them with a 7-1 demolition of Malta.

The results have set up a high-octane clash in Croatia’s coastal city of Split on Sunday, with Russia needing at least a draw to hold on to top spot and book their ticket.

The runners-up go into the playoffs in March.

Russia’s Aleksandr Erokhin scored in each half at home to Cyprus, with Fedor Smolov, Andrey Mostovoy, Aleksei Sutormin and Anton Zabolotny also on target in the last 35 minutes.

A cross by Russia’s Aleksei Sutormin from the right flank found striker Smolov in the box abd he set up an unmarked Erokhin for a tap-in after four minutes.

Smolov made it 2-0 in the 55th and less than a minute later Mostovoy outfoxed three defenders with some fancy footwork to make it 3-0, beating keeper Demetris Demetriou to his far left.

Sutormin headed past Demetriou in the 62nd minute after a defensive blunder, while Zabolotny scored Russia’s fifth with a low strike. Erokhin added his second of the night in the 87th to round off an emphatic victory by the hosts.

Cyprus, bottom of the group with five points, take on Slovenia, who are in fourth place on 11, in their last game.

Spain in control after win in Greece
A penalty from Spain’s Pablo Sarabia secured a 1-0 victory in their World Cup qualifier away to Greece on Thursday, meaning ‘La Roja’ need a point from their showdown with Sweden at the weekend to secure a place at next year’s World Cup finals.

Sarabia’s winner came in the 26th minute after Inigo Martinez was tripped following a corner. Sarabia’s low strike found the net to the left of Odysseas Vlachodimos.

In a nearly empty Athens Olympic Stadium, Spain dominated with 70% possession and were never in danger of losing.

Portugal close in on World Cup after goalless draw in Ireland
Portugal moved closer to automatic World Cup qualification on Thursday despite a poor 0-0 draw with Ireland that left them needing another point in their final game at home to Group A rivals Serbia to secure their spot in Qatar.

Portugal narrowly avoided a shock loss to Ireland two months ago thanks to two last-gasp Cristiano Ronaldo goals and seemed happy to take a point against the fourth-placed Irish knowing a superior goal difference to Serbia put them in the driving seat.

They will have to do it without Pepe, however, after the experienced central defender was sent off late on for a second bookable offence.

Our View: There is no quick fix for inflation