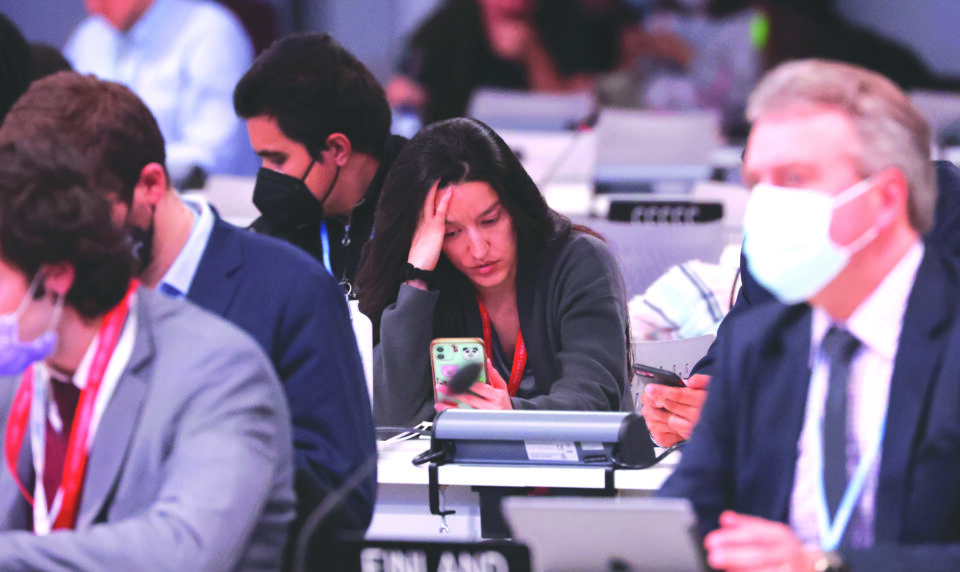 Two weeks of U.N. COP26 climate talks in Glasgow continued past deadline on Friday after the conference president called on countries to make a final effort to secure commitments that would rein in the rising temperatures that threaten the planet.

With signs growing the meeting would run into Saturday, there remained tough talking to be done on issues such as the phasing out of fossil fuel subsidies, carbon markets, and financial help for poor countries to tackle climate change.

A draft of the final deal, released early on Friday, requires countries to set tougher climate pledges next year – in an attempt to bridge the gap between their current targets and the much deeper cuts scientists say are needed this decade to avert catastrophic climate change.

“We have come a long way over the past two weeks and now we need that final injection of that ‘can-do’ spirit, which is present at this COP, so we get this shared endeavour over the line,” said Britain’s COP26 President Alok Sharma.

The meeting’s overarching aim is to keep within reach the 2015 Paris Agreement’s aspirational target to cap global warming at 1.5 degrees Celsius (2.7 Fahrenheit) above pre-industrial levels, the limit scientists say would avert its worst effects.

The new draft is a balancing act – trying to take in the demands of the most climate-vulnerable nations such as low-lying islands, the world’s biggest polluters, and countries whose exports of fossil fuels are vital to their economies.

The draft retained its most significant demand for nations to set tougher climate pledges next year, but couched that request in weaker language than before, while failing to offer the rolling annual review of climate pledges that some developing countries have sought.

Nations are currently required to revisit their pledges every five years.

The latest proposal included slightly weaker language than a previous one in asking states to phase out subsidies of the fossil fuels – coal, oil and gas – that are the prime manmade cause of global warming.

That dismayed some campaigners, while others were relieved that the first explicit reference to fossil fuels at any U.N. climate summit was in the text at all, and hoped it would survive the fierce negotiations to come.

“Right now, the fingerprints of fossil fuel interests are still on the text and this is not the breakthrough deal that people hoped for in Glasgow.”

Some thinktanks were more upbeat, pointing to progress on financing to help developing countries to deal with the ravages of an ever-hotter climate.

Saudia Arabia, the world’s second largest oil producer and considered among the nations most resistant to strong wording on fossil fuels, said the latest draft was “workable”.

A final deal will require the unanimous consent of the nearly 200 countries that signed the Paris accord.

To increase pressure for a strong deal, protesters rallied outside the COP26 venue, where activists had hung ribbons with messages imploring delegates to protect the Earth.

The latest draft acknowledged scientists say the world must cut carbon dioxide emissions by 45% from 2010 levels by 2030, and to net zero by “around mid-century” to hit the 1.5C target.

This would effectively set the benchmark to measure future climate pledges.

Currently, countries’ pledges would see global emissions increase by nearly 14% by 2030 from 2010 levels, according to the U.N.

Fossil fuel subsidies remain a bone of contention. Kerry told reporters that trying to curb global warming while governments spend hundreds of billions of euros supporting the fuels that cause it was “a definition of insanity”.

Financial support is also hotly debated, with developing countries pushing for tougher rules to ensure rich nations whose historical emissions are largely responsible for heating up the planet, offer more cash to help them adapt to its consequences.

Rich countries have failed to meet a 12-year-old goal to provide $100 billion a year in so-called “climate finance” by 2020, undermining trust and making some developing countries more reluctant to curb their emissions.

The sum, which falls far short of what the UN says countries would actually need, aims to address “mitigation”, to help poor countries with their ecological transition, and “adaptation”, to help them manage extreme climate events.

The new draft said that, by 2025, rich countries should double from current levels the funding they set aside for adaptation – a step forward from the previous version that did not set a date or a baseline.

“This is a stronger and more balanced text than what we had two days ago,” Helen Mountford of the World Resources Institute said of the current draft.

“We need to see what stands, what holds and how it looks in the end – but at the moment it’s looking in a positive direction.”

Of roughly $80 billion rich countries spent on climate finance for poor countries in 2019, only a quarter was for adaptation.

A more contentious aspect, known as “loss and damage” would compensate them for the ravages they have already suffered from global warming, though this is outside the $100 billion and some rich countries do not acknowledge the claim.

A group of vulnerable nations including the Marshall Islands in the central Pacific said the final deal needed to do more to address the question. “Loss and damage is too central for us to settle for workshops,” said Tina Stege, the Marshall Islands’ climate envoy.

England all but qualified as Kane hat-trick sinks Albania