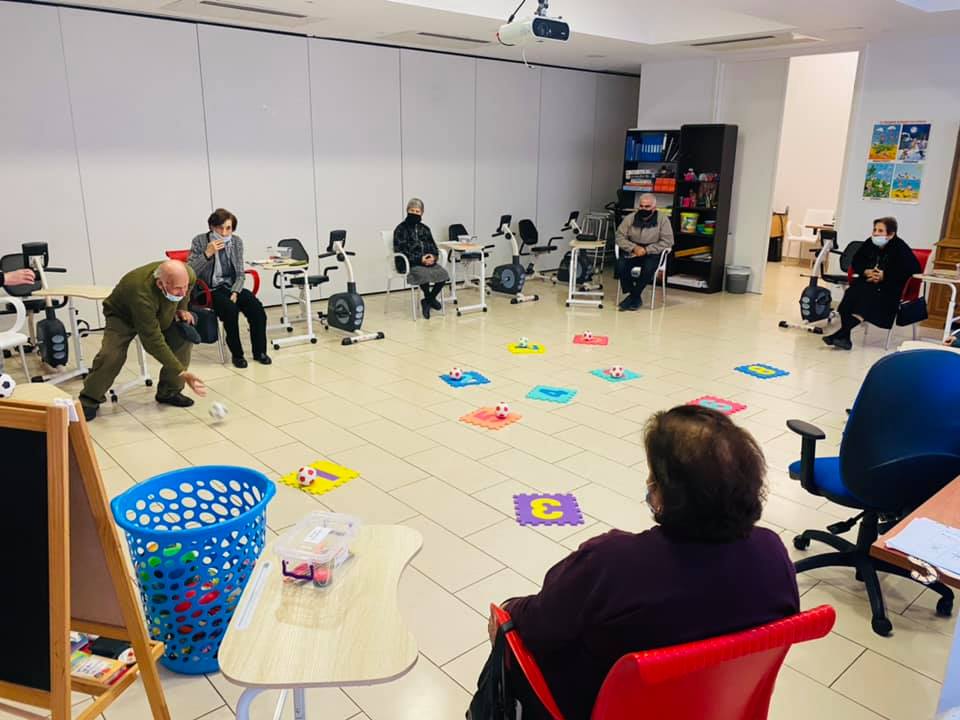 A group game at an Ithaki day care centre

A crucial government plan to improve treatment is still being assessed, leaving families and charities to cope as best they can

Worldwide, dementia is viewed as an epidemic, with over 55 million sufferers and numbers expected to triple by 2050, yet there is still no official data on how many have the disease in Cyprus.

The staggering lack of information is hindering efforts to determine and address the needs of dementia patients – and their carers – experts have told the Sunday Mail.

Meanwhile, charities, which receive “near to zero” or no aid from the government, are all too often left to help as best they can the patients and the families left reeling as they see their once bright, lively loved ones deteriorating.

Despite no official data, Alzheimer Europe estimates the number with dementia in Cyprus in 2012 was 11,250. This figure is currently estimated at up to 18,000, according to Ithaki the charity for people with dementia.

So, what is the government doing?

Well, there is a committee consisting of neurologists and other experts who have come up with a national strategic plan for people with dementia for the years 2020-2025. The plan, however, is still being assessed by the relevant ministries.

“It is a bit time consuming,” deputy head of public health services, Olga Kalakouta said of the process, citing delays due to the coronavirus pandemic.

For now, “some parts” of the national plan are being implemented according to Kalakouta while the entire project is “in the evaluation phase” to determine the budget.

The development of an integrated strategy includes four areas, concerning the prevention, early diagnosis and treatment, patient care and support for their caregivers, as well as research on dementia.

The most important priority is to gather data “to determine the complete picture of the number of patients, including their characteristics, comorbidities, age”, said senior consultant neurologist Dr Yiolanda Christou, who participates in the cognitive behavioural disorder centre and represented the Cyprus Institute of Neurology and Genetics at the committee.

Christou said that it was previously difficult to carry out the study, but “now with Gesy [national health scheme] it could happen with good cooperation”.

She said tracking the prevalence of dementia will also help determine patients’ needs.

“It is very important to first see the needs of the patients,” she said.

On paper, the national plan is ambitious. It aims to extend dementia care by improving medical and pharmaceutical treatment, relevant studies and timely diagnosis as well as to include the possibility for inpatient treatment by creating the first 24/7 specialised infrastructure, plus day care centres in all districts.

However, establishing 24/7 facilities requires a certain budget “which is not always possible”, according to Christou and Kalakouta.

“We are willing to look at the issue again, if they want us to review the plan to see how we can implement it,” Christou said, adding that if all-round care is not feasible, establishing day care centres in all districts must be.

Whilst the government makes up its mind as to what it is willing to offer, the charities stagger on, determined to stand by the side of patients and already offering free services across the island.

“Our aim is to create day care facilities with specialised staff in all districts,” said Eftihios Christofides scientific coordinator at Ithaki, which currently runs two day centres in Limassol and Nicosia, reaching about 70 residents.

Efforts are underway to open a third in Paphos, where services for patients with deteriorated cognitive function are even more limited.

The centres operate daily between 8am and 1pm by health professionals who carry out mental-stimulating activities for the memory, attention and reasoning and mild physiotherapy and physical exercises.

On top of that, the charity holds information events and afternoon appointments for the assessment of patients but also to provide free and crucial psychological support and training to the families.

A different charity, Cyprus’ Alzheimer’s Association, runs a day care centre in Larnaca and also offers home care for the patients, as well as support to the care givers.

“They [care givers] must understand what this disease is and why the patient is acting this way,” said Christofides.

“Once they do that, they can learn techniques to help themselves and the patient and avoid conflict.”

The impairment in cognitive function is commonly accompanied by changes in mood, emotional control, behaviour, or motivation. Most cases of dementia concern Alzheimer’s, and it affects usually people over 60, however local doctors and charities said they have treated people in their early 50s as well.

“The first thing that is affected is short-term memory, so if we notice a person that forgets what they did just before, this should concern as and we must look into it,” Christofides said.

Other factors might be the cause of memory problems, including thyroid issues, lack of B12 vitamin while hearing loss is also related to the development of the illness.

The scientific coordinator highlighted the importance of early diagnosis to extend quality of life, adding that when the disease develops and the life quality drops, “it might not be worth to intervene”.

Jenny, 33, who took turns caring for her grandfather when he was diagnosed with dementia in his early 80s, said it was a “challenging time for everyone”.

“It took a while to diagnose him, different doctors would give a different diagnosis… Each doctor also had a different course of action with different medications,” she said.

Before her grandfather died at the age of 87 in 2015, the family was instructed to take him to the psych ward of the Nicosia general hospital under their own care since there was no space in state nursing homes.

“We ended up changing between two different private nursing homes due to the mishandling of my grandfather. Most of the time you are left questioning how the people working in the health care industry get hired,” Jenny said, adding that there were definite incidents of neglect.

Cases like this call attention to the need of specialised facilities, with trained staff where patients can receive appropriate care and attention, Christofides explained.

There is no treatment for dementia, but available medications can delay its development.

Sometimes patients present serious side effects and are forced to stop their treatment.

“He led an active life,” Jenny said of her grandfather. “But one of the medications he was taking, left him unable to walk so he was bound to a wheelchair where he became very frustrated and angry.

“Watching someone you care for become a different person and lose the abilities and functions they once had right before your eyes is a very difficult thing to deal with.”

According to Dr Christou, a dementia patient might present other behavioural issues and disorders which might require psychiatric drugs, and “those drugs might cause a repression, or the patient might be more sensitive to those drugs.”

The doctor also warned that “patients worsen rapidly” even while on prescription, but they should not stop taking medication because they might “lose their abilities even faster”.

So far, medicines available for dementia are covered by Gesy, excluding vitamins and supplements.

Since 2003, there have been no new treatments for Alzheimer’s, for example, to be approved by the European Union, but there might be some hope on the horizon.

Christou is confident about the results of a new, though controversial drug, Aduhelm, which was approved this summer by the US Food and Drug Administration (FDA) based on its ability to clear a type of plaque from the brain that is believed to be a possible cause of Alzheimer’s.

“It is the only drug that argues it possibly helps with the development of the disease,” the neurologist said.

Large clinical trials of Aduhelm, known chemically as aducanumab, produced contradictory data, with one trial failing and another showing benefit. There was also a potentially serious brain swelling side effect, Reuters reported earlier this year.

“I believe it was tested for a limited time frame and that perhaps the improvement will be illustrated after some time,” Christou said.

She estimates that within the next year, the drug will be available in the European Union, with a protocol for its administration issued by the European Medicines Agency.