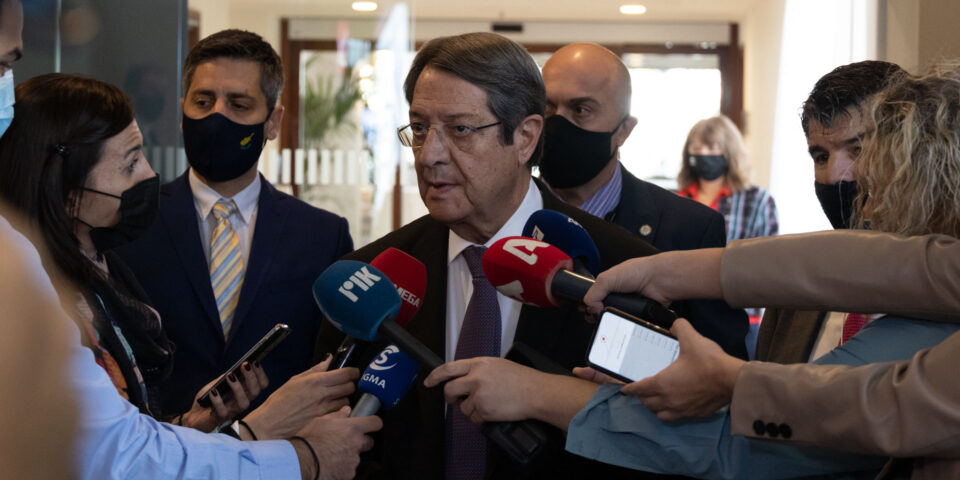 President Nicos Anastasiades asserted on Tuesday that those attacking him over his handling of the peace process are in reality attacking the Greek Cypriots, pointing out that a recently leaked UN document bears out what he has said all along – that the failure of negotiations in Switzerland in 2017 was down to Turkish intransigence over the issue of guarantees.

“It is not the President of the Republic who is under fire. It is Cypriot Hellenism itself that comes under fire whenever they attribute responsibilities to it… unless what they wanted me to do was to agree to the guarantees and the presence of [Turkish] troops, to agree to anything that Turkey sought,” Anastasiades said.

It’s understood he was alluding to ongoing censure – coming primarily from Akel – over his conduct at the July 2017 talks in Crans Montana. Anastasiades has suggested that such criticism plays into the hands of the Turkish side.

Answering journalists’ questions about the leaked UN document – notes taken on July 6, 2017 at Crans Montana, Switzerland – the president reiterated he had done everything possible to reach an agreement there.

“The issue of security [as part of a settlement package] was brought to the fore thanks to our own actions, whereas never previously had this been discussed, and it is well known that following the meeting with the UN Secretary-General on July 4, 2017, there came the important statement that spoke of an obsolete system of guarantees and that another way had to be found to provide security if and when needed,” Anastasiades said.

“Therefore… as I stated at the time and now wish to repeat, what caused the talks to collapse was Turkey’s insistence on guarantees and on the presence of an increased number of occupation troops, compared to the proposal for a military contingent for a certain period of time, as provided for by the Treaty of 1960.”

The leak pertains to the notes taken at the meeting between UN Secretary-General Antonio Guterres and Turkish Foreign Minister Mevlut Cavusoglu in Crans Montana on July 6, 2017.

The note-taker was senior UN official Matthias Schuster. The meeting took place hours before the working dinner between Anastasiades, Cavusoglu and Guterres, which produced a deadlock.

According to the summary of the discussion, Guterres asked Turkey’s chief diplomat “what Turkey’s red lines were, taking into account the talks of the previous days.”

It goes on: “Mr Cavusoglu stated that for Turkey the view of zero troops, zero guarantees was not a starting position (was a non-starter).”

Elsewhere the document reads: “Mr Cavuşoğlu stated that the Treaty of Guarantee is a taboo subject between the Turks and the Turkish Cypriots. The Turkish Cypriots had vital security concerns. That is why it has been extremely difficult for Turkey to change its position on this matter.

“What Turkey could accept is the renaming of the Treaty of Guarantee to the Implementing Treaty. With four parties. At the initial stage the Treaty would include the right to unilateral action if joint action by all parties (to deal with acts of concern) would not be possible.”

A key excerpt in the UN notes which Anastasiades is highlighting to show Turkish intransigence at Crans Montana is the following: “The Alliance Treaty could be structured as a new Treaty, but should include provision for the permanent presence of Turkish troops. Zero troops were a red line for Turkey. The Treaty can be renamed the Treaty of Friendship, in accordance with the proposal made by [Greek foreign minister] Mr. Kotzias.”

Weighing in on Tuesday, socialist party Edek said the leaked UN document “confirms Turkey’s expansionist objectives, so that it can make political capital through a settlement in a bid to gain control over the functioning of the entire state [in Cyprus].”

Johnson rebuffs demand for talks on Parthenon marbles, Cyprus on the agenda