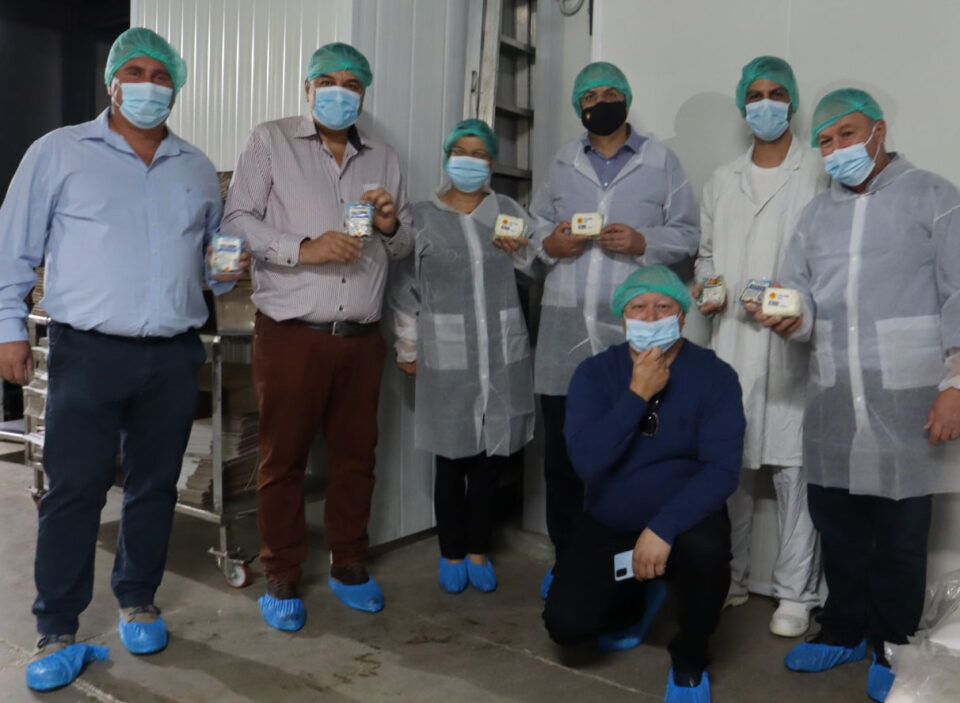 The first batch of halloumi produced according to protected designation of origin (PDO) specifications was produced at a factory in Frenaros on Wednesday.

The process was observed by Agriculture Minister Costas Kadis, who toured the Somis Dairy Industry factory premises and was briefed on each stage of halloumi production, and described it as a “wonderful experience”.

The European Commission signed off on Cyprus’ application for PDO (protected designation of origin) and protected geographical indications for halloumi earlier this year.

As of October 1, only halloumi/hellim produced in Cyprus and according to the product specification can use the registered name. This includes cheese made in the north, which the regulations permit to cross the Green Line provided it meets EU production standards.

“This is a day of great satisfaction, as we are seeing the efforts we made to establish that our national product is produced in Cyprus, take form,” Kadis said.

“We have formed a very important synergy with one of the most historic dairies in the country,” which is the primary supplier of halloumi to Scandinavia, he added.

Kadis said this collaboration is important as after Cyprus, Sweden consumes the second largest amount of halloumi per capita, adding that arrangements like this one “will highlight our product worldwide, will give it the added value we all seek and will also highlight the quality of the product “.

The minister urged more cheesemakers to join the process (which requires them to apply for a contract to produce PDO-compliant halloumi), saying it will bring economic benefits and profit across the supply chain.

Gaining what should have been the coveted PDO proved to be a long battle, not helped by the fact that many halloumi producers criticised the government for making the specifications so strict that they could not be followed. Chief among these was the regulation that at least 51 per cent of the milk used in halloumi production must be goat and/or sheep milk.

But Kadis was upbeat on Wednesday.

“There are still some dairies that have not started the process, obviously because they want to sell their old stocks, or for other reasons, but I believe the road has been opened and more will enter the process.”

He added that designated control body Bureau Veritas will be at the Somis factory in the following days to verify that the cheese is made according to the specifications.

“It’s something we welcome because this verification will add value to the product.”

Kadis said that his ministry has and will continue to support all efforts to produce and promote halloumi, in order to support the entire agriculture food chain, from dairy farmers to cheesemakers processing the final product.

On behalf of Somis, Chrysostomos Elia said the company was “honoured to host” the minister, adding that “We have always supported halloumi entering the PDO register and think the best is yet to come”.

Loizos Papadopoulos, owner of Sweden-based Fontana Food talked about the cheese’s popularity in Scandinavia, saying the company will do its part to promote halloumi in Sweden and beyond.

At the same time, Panagrotikos farmers association and the union of Cypriot farmers (Eka) were positive about the new developments, which Eka general secretary Panicos Hambas said will bring many benefits to everyone involved.

“This is an historic moment, which marks an even further upward trend that will put halloumi among the worldwide elite of cheese products,” Tasos Yiapanis from Panagrotikos said.

Both said that there are still some problems to be addressed, from animal welfare and feed shortages to large halloumi stocks not yet sold, as both could lead to increases in the raw material, milk, “whether that is cow milk or goat and sheep’s milk”.