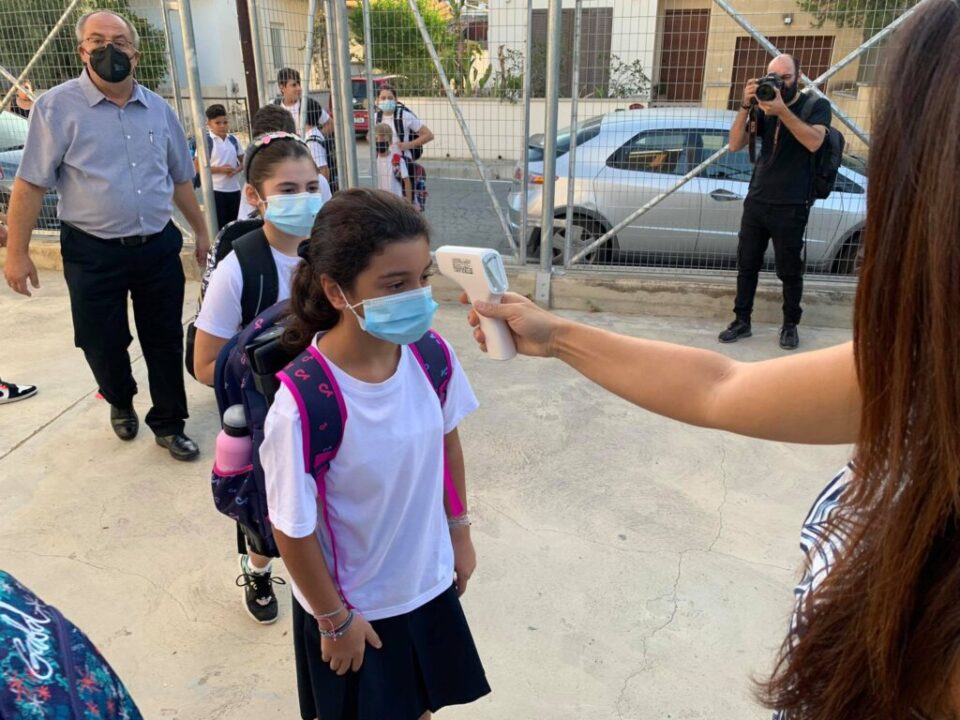 Some parents are deeply concerned over the compulsory use of facemasks in primary schools, as the measure appears to have been preliminarily adopted without notable opposition during Monday’s Covid-19 advisory meeting. Masks are currently optional for younger children.

“The primary schools are unfortified, only the teachers are vaccinated, children neither wear masks nor are they widely tested,” said Education Minister Prodromos Prodromou.

But some parents claim that their children are – once again – being unfairly targeted.

“If you want your child to wear an old piece of cloth on their face and give them over to the hands of paranoia, stay and wait for others to fight for you,” the United Parents of Cyprus group wrote on social media.

The group issued a statement addressed to the health and education ministers as well as Constantinos Tsioutis, head of the advisory team, declaring that they will demonstrate and strike against the measures – unless the officials can make available the data and relevant studies which informed the proposal on masks.

The proposal comes within the wider context of weekly testing and the likely cancellation of Christmas school plays and other social activities – seen as core traditions by some.

Following a steady rise in infections, Monday’s meeting led to Health Minister Michalis Hadjipantelas issuing a list of the tentative new measures, with testing once a week and mandatory facemasks at primary schools amongst the proposals. A decision on which measures will be adopted will be taken by cabinet on Wednesday.

Indeed, local media reported that 282 Covid-19 infections were recorded amongst primary school students from November 13-19. Combined with the infections in secondary schools, 277 during the same period, they account for 25 per cent of the reported cases during that time.

The mask policy and Covid-19 tests are being promoted as a means to prevent school closures and a return to distance learning, which has even wider social and psychological implications for children.

It has won the tentative support of the confederation of parents’ associations of primary school pupils. Deputy president Anita Taliotou told the Cyprus News Agency that organised parents do not oppose the move “if it is to save the situation,” but queried its effectiveness.

Even so, many parents have bristled at the language employed to describe the role that children have in the spread of the virus, sometimes being referred to as “virus factories” or “vectors” – which they often deem dehumanising.

Some also point to the number of deaths from Covid-19 amongst younger age groups compared to older members of the population.

According to the US CDC, 498 individuals aged 5-18 are reported to have died from Covid-19 while total deaths attributed to the virus in the US number 765,319, as of November 17.

But many calling for stricter measures at schools, particularly primary education, acknowledge the low level of risk of serious illness from Covid-19 amongst children, but are instead concerned over them infecting vulnerable adults.

For his part, Prodromou on Tuesday called for “cooperation and understanding” as he addressed the widening rift over the mask mandate.

“It certainly appears that internationally, not just in Cyprus, there is a resurgence of the pandemic,” he told reporters, adding that drastic measures had already been adopted across Europe.

“We must, above all else, protect public health and protect schools operating on an in-person basis – whatever we say, nothing can replace the normal operation of in-person education,” he said.

“Therefore, some measures must be enforced… because [primary] schools do not have the shield of vaccination we must consider greater levels of protection in that sector,” he added.

He concluded by stating that the reactions against the mask proposal are understandable and that a final decision will be taken on Wednesday, following further discussions on the measures.

Adamos Hadjipanayis, president of the European Academy of Paediatrics told the BBC in October that: “The age limit for the use of masks by children is not yet a scientific definition.”

And in the UK, as of September, face coverings are no longer advised for pupils, staff or visitors either in classrooms or communal areas.