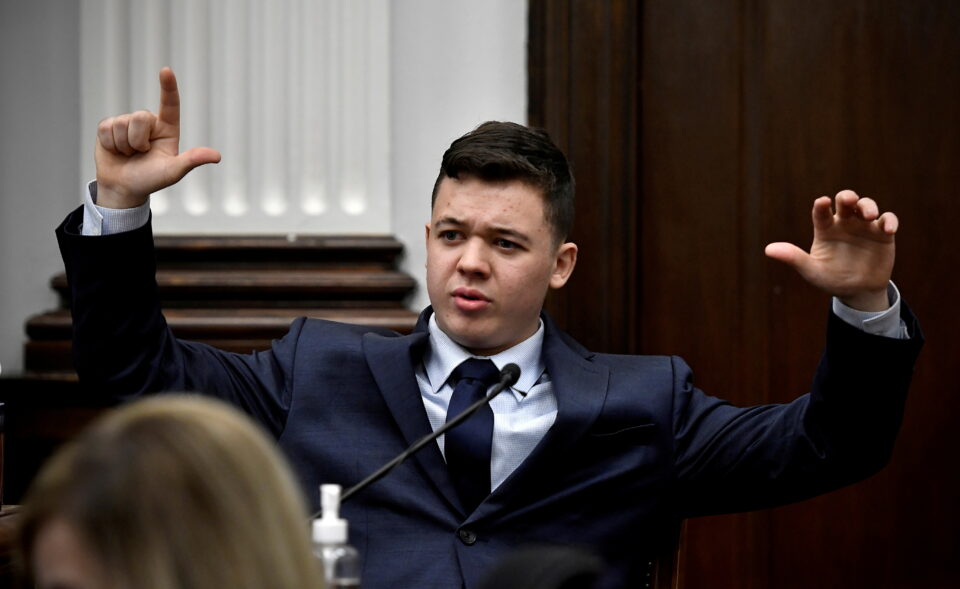 FILE PHOTO: Kyle Rittenhouse talks about how Gaige Grosskreutz was holding his gun when Rittenhouse shot him on Aug. 25, 2020, while testifying during his trial at the Kenosha County Courthouse in Kenosha, Wisconsin, November 10, 2021. Sean Krajacic/Pool via REUTERS/File Photo

A look at the Kyle Rittenhouse trial

In some states in the US when you leave home you check you have not forgotten your house keys, your wallet, your mobile, and last but not least your gun.

So when teenager Kyle Rittenhouse aged 17 left his home in August 2020 in the state of Illinois for the streets of Kenosha in the state of Wisconsin armed with a semi-automatic rifle, he did what comes naturally for many Americans.

There was unrest and a curfew in Kenosha, but he went anyway and got into a fight with demonstrators there and used his semi-automatic to kill two young white guys in their 20s and seriously injured a third.

One more sacrifice of two young lives on the altar of the right to bear arms enshrined in the second amendment of the American constitution to wit: a well-regulated militia being necessary for a free state, the right of the people to keep and bear arms, shall not be infringed.

The origin of the right to bear arms is English common law though it is no longer part of English common sense – in England even police officers are famously unarmed. According to the great English jurist Sir William Blackstone, however, the right to arm oneself is an auxiliary right that backs up the absolute rights of personal security, liberty and private property. “The fifth and last auxiliary right of the subject,” Blackstone observes in his commentaries of 1765, “is that of having arms for their defence, suitable to their condition and degree such as are allowed by law…of the natural right of resistance and self-preservation, when the sanctions of society and laws are found insufficient to restrain the violence of oppression.”

Nations too have the right under customary international law to use reasonable force in self defence, which was expressly preserved by the UN Charter when it forbade the use of force otherwise than by authorisation from the UN Security Council. The use of force preemptively and the use of excessive force pose distinct problems in the law of nations but the right to defend themselves has never been doubted.

In the US the individual’s right to self defence and his or her right to bear arms are sides of the same coin that reflect Blackstone’s fifth auxiliary right, but only up to a point since he qualifies the right to bear arms “suitable to the subject’s condition and degree such as are allowed by law.”

Kyle Rittenhouse was charged with murder and causing serious injury. His defence was that he was acting in lawful self defence and was in possession of a firearm as part and parcel of his defence of the community, property and ultimately himself when he was attacked. The case against him was that he could not have been acting in self defence as he went to another state looking for trouble armed with a semi-automatic rifle at a time of high tension and unrest during a curfew – in other words he had engineered the predicament in which he found himself and consequently the defence of self defence was not available to him as he was and remained the aggressor.

There was video evidence about what happened, as often happens these days of ubiquitous CCTV, mobile and drone video cameras. So there was hard evidence about the sequence of events and the immediate circumstances in which he shot his victims; the task of the jury was interpret what they saw on video in light of the evidence they heard and the directions of the judge on relevant aspects of the law of self defence.

In their wisdom the jury comprising seven women and five men acquitted him of all charges. Their verdict shocked some and delighted others. The strength of the system of trial by judge and jury, paraphrasing Abraham Lincoln’s Gettysburg address of 1863, is that it is justice by the people for the people save that that the law comes from the judge.

What then is the law on self defence? The basic principles are broadly similar in America with those in England and Cyprus as well as other common law countries. Cyprus does not have trial by jury but the law regarding self defence is broadly similar to English law.

The variety of circumstances in which you may need to defend yourself or a friend or relative or property or to prevent crime or effect a lawful arrest – all of which come under the broad label of the defence of self defence – are many and the law has developed incrementally case by case with occasional interventions from the legislature.

Even if an accused is the initial aggressor, the defence may still be available if for example ‘the tables turned,’ but not if an accused engineered an attack on himself to justify using greater force in the guise of self defence. Excessive self defence is by definition not proportionate and therefore not capable of being reasonable.

Failure to retreat is not fatal to self defence, but it all depends on the circumstances. Sometimes it is reasonable to retreat if you can do so safely but not if you genuinely believe you cannot. For example where both parties are facing one another armed with guns it might be foolhardy to retreat for fear of being shot in the back.

It looks as though the prosecution in the Rittenhouse case failed to prove to the jury beyond reasonable doubt that he engineered attacks on himself by going to another state at a time of unrest armed with a semi-automatic rifle, and that this was because the jury accepted that possession of a semi-automatic rifle was or may have been an act of self defence rather than cogent evidence that he was the aggressor.