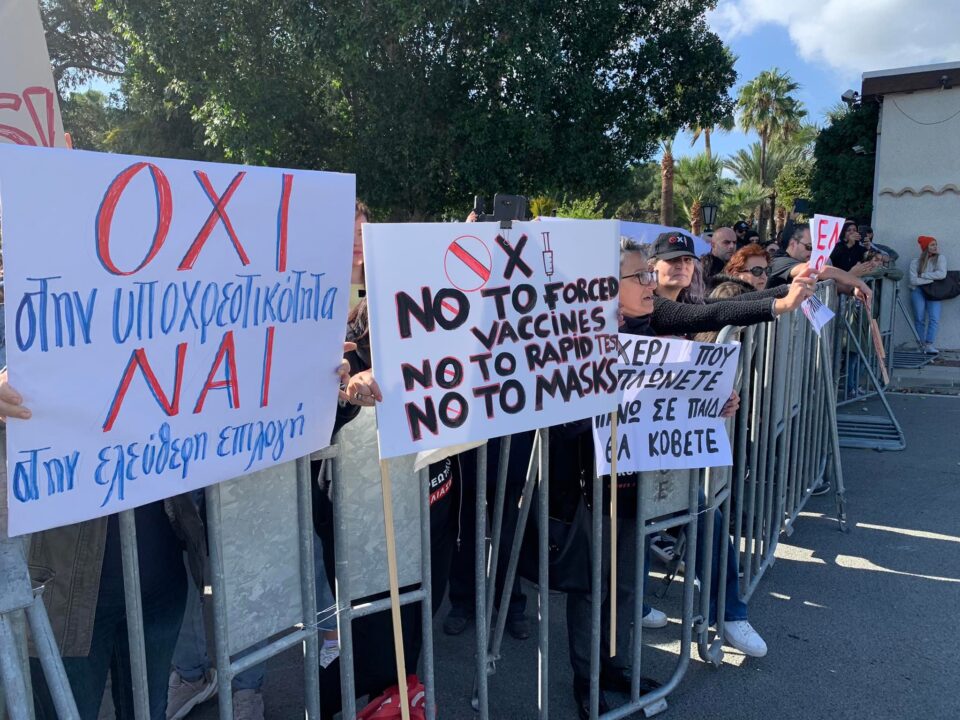 The House education committee on Wednesday discussed the health protocols in schools against the further spread of Covid-19 with protesters outside calling for the abolition of the measures that include obligatory use of masks for children aged six and over.

The meeting prompted a gathering of around 300 people outside the Philoxenia conference centre in Aglandjia where parliament committees meet, to protest the obligatory use of masks in primary schools, rapid tests, and vaccination of children. The Cyprus News Agency reported that tempers flared with protesters asking that a delegation be allowed to attend the meeting. They also asked to see House President Annita Demetriou. The entrance to the conference centre was closed by the police.

MPs, teachers, organised parents, and state officials criticised the attacks and threats mainly against teachers by disgruntled parents who did not agree with the measures implemented as of this week in primary schools.

The committee heard that a small percentage of children did not go to school after the obligatory use of masks and weekly rapid tests were introduced.

Head of primary education at the health ministry, Marios Stylianides, told the committee that four to five percent of pupils did not go to school on Monday due to their parents’ objections to the measures.

MPs also heard that many teachers are afraid to go to work after being verbally and physically assaulted by parents.

Head of primary teachers’ union Poed, Myria Vasiliou said they were informed that, on some occasions, pupils had participated in incidents of violence against teachers.

Representatives of secondary education teachers’ unions Oelmek and Oltek too condemned the incidents against their colleagues. They said it was unacceptable for parents to threaten teachers for the implementation of health protocols in schools.

The measures follow concerns on the rise of Covid-19 cases among primary school pupils.

Earlier in the day an official told state broadcaster CyBC that 30 cases were detected during testing in primary schools on Tuesday and 18 in high schools. Head of the covid testing programme at the health ministry, Carolina Stylianou said that this leads to other cases due to the children’s interaction after school with close relatives and other children from other schools during extracurricular activities.

She pointed out that the 30 cases detected in primary schools are only among children who got tested by the mobile units visiting schools and did not include the results of tests carried out outside schools.

Stylianou said most parents agree with the measures in schools. 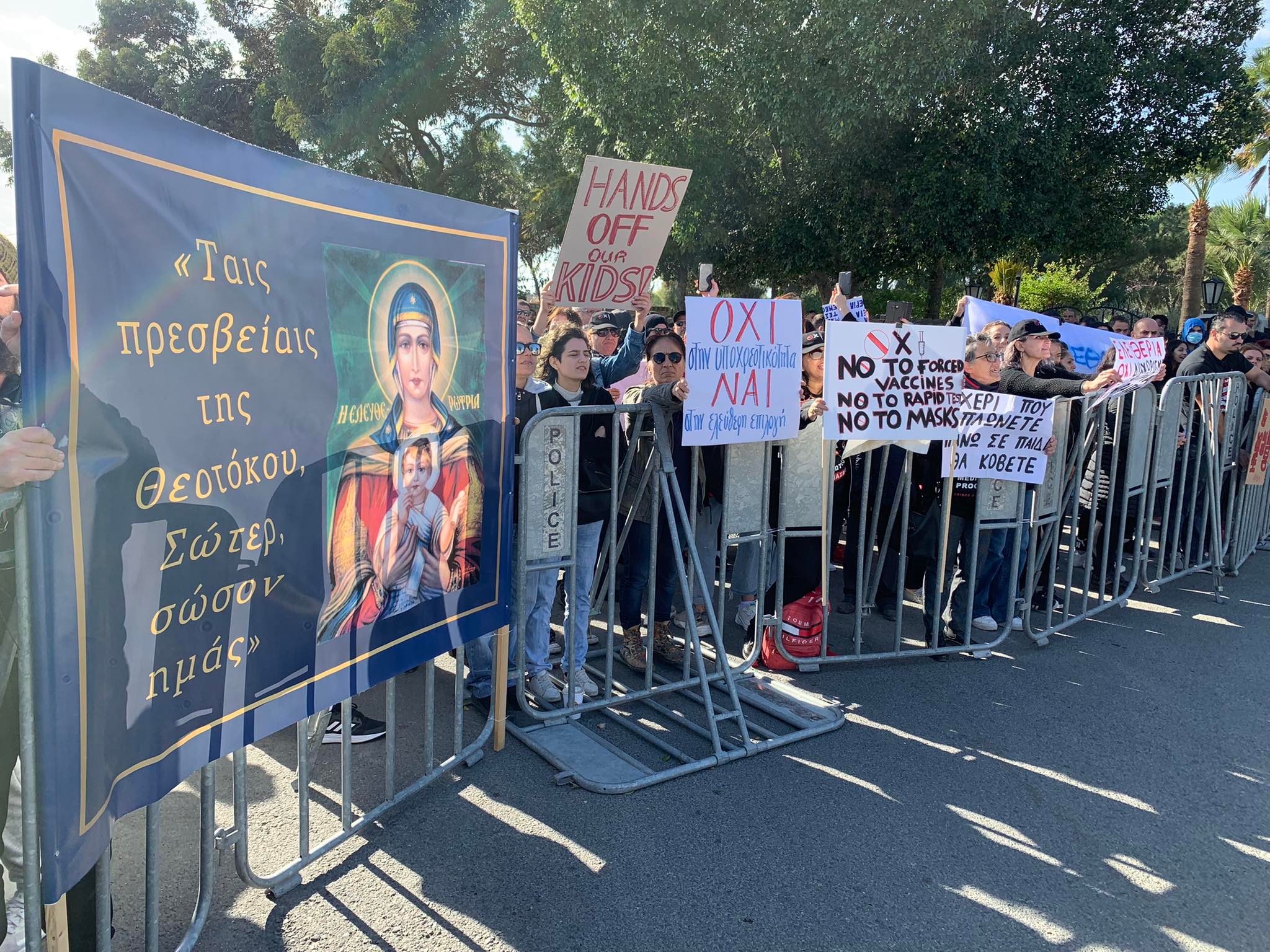 Valentinos Sylvestros, epidemiologist and head of the tracing unit, told the committee that the health ministry that the measures taken are always targeted at the population groups which are most affected each period. “To this all the new mutations are taken into consideration, the new epidemiological data and new data coming from the international and European health organisations, which make recommendations and the member states are asked to see if they are feasible or not,” Sylvestros said.

“It is important that cases among pupils remain low, so as not to create large chains,” Sylvestros said. He explained that classes have large numbers of pupils, who, if they are infected, will transmit the virus to their families.

“The data we possess prove that family transmission is the number one mode of transmission,” he added.
Children’s Rights Commissioner, Despo Michaelidou, pointed out that the closure of schools would further burden the psychological health of children because, except from education, it is also linked with their socialisation, and the development of other skills such as empathy.

She said, however, that, before issuing decrees, “it would be good to make an effort to communicate the measures” because it is difficult to pass the message of the need to take measures for children of this age to parents.

“I believe we need to listen to the experts. Political decisions must be taken based on epidemiological recommendations and any reactions should be considered in this context,” Michaelidou said.

She called on parents who refuse to send their children to school to consider what they are depriving their child of, which is the right to education. On the other hand, she added, the state ought to offer alternative ways of education for those children.

Regarding the reactions of parents, she said that children’s rights give parents the right to raise their children according to their own beliefs, values and beliefs, but at the same time prohibit the excessive power of adults over children.

“We do not let our children speak for themselves and they act as mouthpieces and speakers of adults’ wishes,” she added.

The protesters presented a memo to the head of the House education committee, Pavlos Mylonas, calling for the abolition of the measures, which they said, were imposed by the health minister. The memo, signed by Niki (Victory) political movement stipulates that the decisions for the measures in schools were taken by the minister by the power vested in him by the law on infectious diseases and not by the legislature.

The group also cited polls according to which 81 per cent of people disagree with these measures.

Some of the protesters were also calling on President Nicos Anastasiades to resign. Banners were also hoisted saying “Our children are not lab rats”, among other things.

Diko MP Zacharias Koulias expressed regret that protesters were not allowed to send a delegation to attend the meeting so that their positions could be heard.

Mylonas said he acted in full consultation with the House Speaker regarding the entry or not of the parents’ delegation inside the conference centre while the main concern was the protection of the children who together with their parents participated in the mobilisation.

“It was necessary to protect the prestige and the parliament’s operation regulations, which in no case can, under any circumstances, be blackmailed by anyone,” Mylonas said.

He said their main concern is to have open schools and pointed out to the need to listen to the experts and doctors who advise society in general on issues of pandemic management. Mylonas called for calm and mutual understanding.