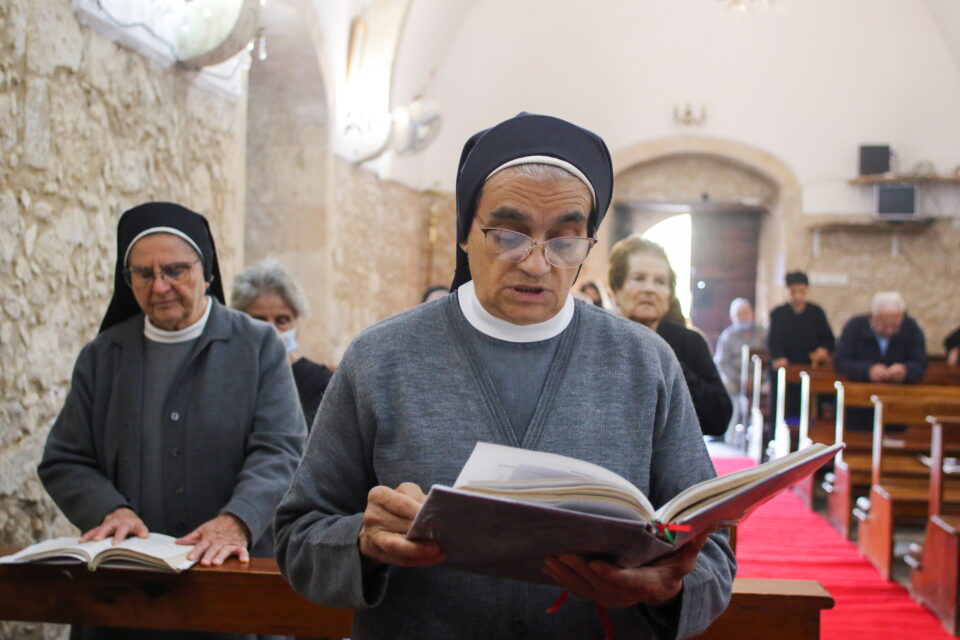 Maronite Catholic Nuns attend a liturgy at the Church of St. George in Kormakitis

As day breaks over a tiny village in the north-west, some 20 people in an ancient Church observe a morning liturgy in an even more ancient language.

For centuries, this small community of Maronites has retained a distinct identity rooted in their Catholic faith.

Ancestors of Christians who settled in Cyprus after fleeing what is now Lebanon and Syria in waves from the 8th century onwards, many were forced to move again after the invasion almost half a century ago.

Some fear that unless more of them are allowed back to their homes, their community and its language will die out; they are hoping a visit this week by Pope Francis will help their cause.

“What we would want from the Holy See is for it to extend a hand… to change this situation so the coming generation retains its identity, as Maronites,” Father Iosif Skender, a Maronite priest, said.

One of the main events of the pope’s visit on Thursday and Friday will be held at the Maronite cathedral in Nicosia.

The village of Kormakitis is the largest of four Maronite communities in the north.

Less than 200 of its 2,000 strong community remained after the invasion, although since crossing opened in 2003, and permission was given in 2010 for Maronites to resettle there, the population has now grown to about 250.

The melodic service at the Church of St George in Kormakitis takes place in Greek, Arabic and Syriac-Aramaic, the ancient tongue spoken by Jesus and passed on down by their forefathers.

“There is the beauty of these three languages, but essentially it’s Aramaic which is the basis of the tradition of Maronites,” Skender said.

The Maronite Church is headquartered in Lebanon, where most of its members still reside, but beyond the doors of the church in Cyprus, another hybrid Aramaic has evolved, spoken by only about 800-900 Cypriot Maronites.

Cypriot Maronite Arabic (CMA), also known as ‘Sanna’ was passed down phonetically from generation to generation and went unwritten for centuries until an alphabet was established several years ago.

The community now has a textbook for language classes but fears difficulties in learning it in isolation.

“I’m the last generation that speaks it,” said Antonis Skoullos, whose family is from Kormakitis. “In 50 years this language will only be heard on YouTube.”

In the local coffee shop men chat animatedly among themselves in Sanna, also known as ‘Arabika’, politely switching seamlessly to Greek for strangers.

“Our children know Arabika but their children don’t, so we are forced to switch to Greek, and that’s how our language is gradually being eroded,” said Iosifis Skordi. His wife Chrystalla, 93, nodded her head vigorously in agreement.

Skordi, who still drives a pickup at 92, said he would do his utmost to see the Pope during his visit. “He is second to God,” he said.