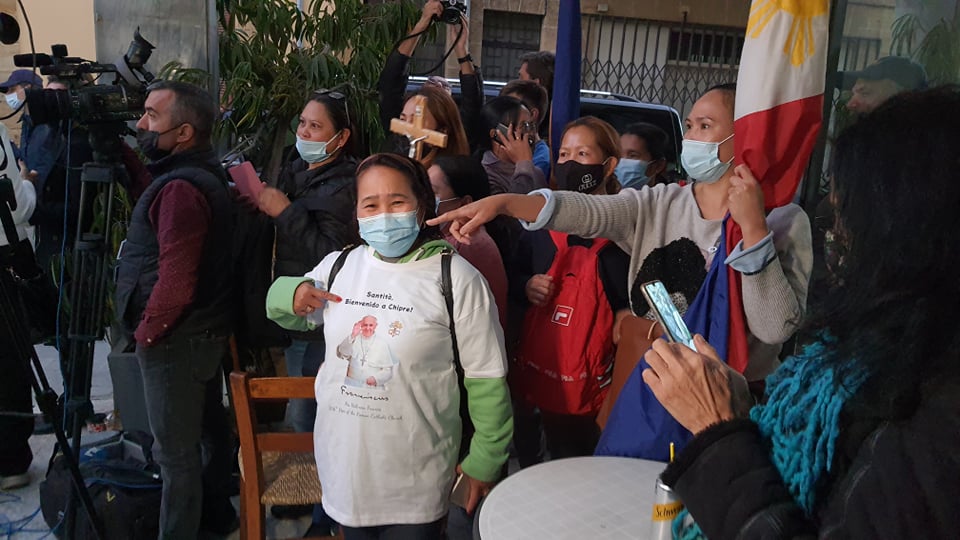 “Joy, simply the purest joy I ever felt in my entire life.” That is how much Pope Francis’ visit meant to Aurora Reyes, a Filipino permanent resident of Cyprus who witnessed the arrival of the Pontiff at the Maronite Cathedral of Our Lady of Grace in Nicosia on Thursday.

“I struggle to put into words what I am feeling right now,” Aurora told the Cyprus Mail.

“The entire world has gone through so much in the past couple of years and our faith was tested several times.

“Seeing him just a few metres away from me gives me great strength and hope that the future for me and for everyone else will be better.”

Pope Francis, accompanied by cardinals from the Vatican and by a massive security detail, arrived at the Maronite church from Larnaca airport aboard an unassuming Fiat 500, a detail that did not go unnoticed among the many gathered to welcome him.

“I think that says a lot about the kind of person he is and what values he represents,” Halla, a Lebanese-born Maronite living in Cyprus told the Cyprus Mail.

Speaking outside the Maronite coffee shop outside the church and among people watching the service on TV, Halla said the quality she appreciates the most about the Pope is his humbleness.

“Every Pope has his distinctive trait. Pope John Paul II was a unifier in a world that needed a leader at that time, Pope Benedict was a strenuous and stern defender of Christian values.

“However, none of them represented me as much as Pope Francis does. Thanks to his humbleness everyone listens to him, from the poorest to the richest, from the miserable to the most powerful.

“The fact he chose a Maronite church as the first stop of his visit to Cyprus means so much to us,” Halla said.

The Pope’s reconciliatory aura seems to be what struck people at the Maronite church the most. One in particular, Father Peter of the Holy Cross Catholic Church in Nicosia, was in awe of the Pontiff’s presence.

“Many priests at our church have seen the Pope in the Vatican during our trips to Italy, but seeing him here in Cyprus will feel different, it’s something I cannot describe in words,” Father Peter said.

He added that visiting the island at a time when social tensions due to the high presence of migrants and asylum seekers are at an all-time high sends a very powerful message.

“We all needed something like this. His visit means a lot to everyone, Catholics, Maronites and Orthodox alike.

“I hope we will retain this feeling after he leaves and that his visit ends up being a legacy that we can all treasure.”