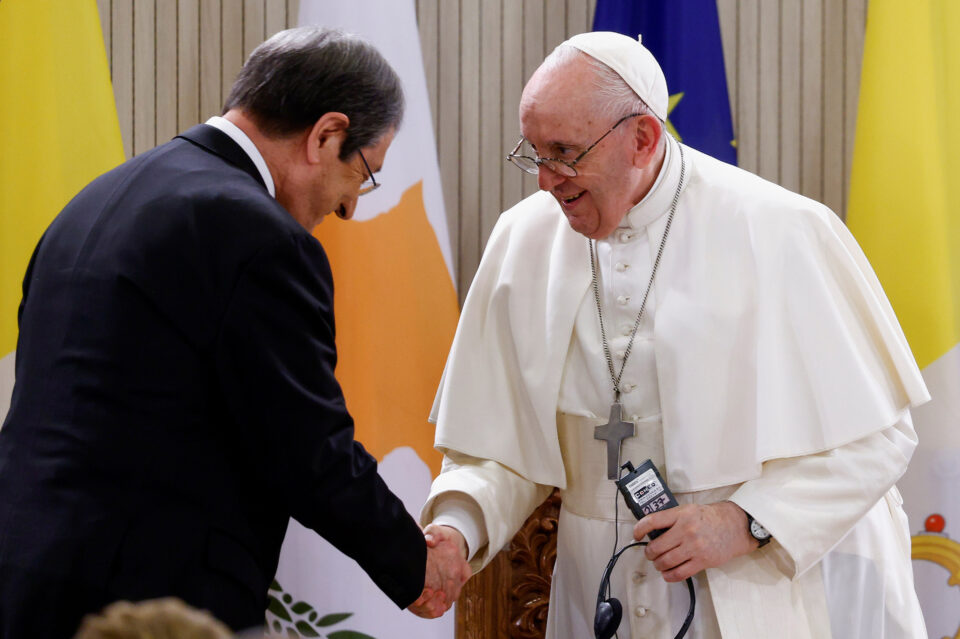 Pope Francis began his visit to Cyprus on Thursday with messages of hope, brotherly love and one of dialogue between divided peoples saying hopes for peace should be nurtured by “the power of gestures, rather than by gestures of power”.

Francis arrived at Larnaca airport around 3pm amid tight security where he was met by House President Annita Demetriou and dignitaries of Church and state, and a group of around 30 children who carried placards and flowers to welcome the Pontiff.

In old Nicosia, people turned out to see the Pope arrive and gathered in the Maronite coffeeshop Kormakitis at Paphos Gate in Nicosia where they could watch the pomp and ceremony in the church next door.

The Pontiff’s first official engagement in Cyprus took place at the Maronite Cathedral of Our Lady of Grace in old Nicosia where both Maronite and Latin priests greeted him. Maronite Patriarch Bechara Boutros al-Rahi had travelled from Lebanon for the occasion.

In his address, the Pope urged people to keep their faith without growing discouraged by the ongoing issues in the world.

One of the first topics he raised was the crisis in Lebanon, expressing his concern for the situation in the country. “I am sensitive to the sufferings of a people wearied and tested by violence and adversity,” he said. “I carry in my prayer the desire for peace that rises from the heart of Lebanon.”

He said he shared his joy at being a pilgrim in Cyprus, following in the footsteps of the apostle Barnabas “whose greatest trait was his patience”. “Barnabas had the patience of discernment, the patience to study and embrace other cultures and traditions and he accompanied newcomers to the faith by taking them by the hand and dialoguing with them,” Francis said.

“Walls do not and should not exist in the Catholic Church. For the Church is a common home, a place of relationships and of coexistence in diversity,” he said, adding that in Cyprus  there were many spiritual sensibilities, different backgrounds and histories, different rites and traditions.

“Yet we should not experience diversity as a threat to identity; we should not be jealous or defensive. If we fall into this temptation, then fear grows, and fear gives rise to distrust, distrust leads to suspicion and then, sooner or later, to conflict,” he said.

Francis’ message was to follow the example of Barnabas and to welcome “new brothers and sisters arriving from other shores of the world,” most likely referring to migrants, a hot topic in Cyprus in recent years, and one of the Pope’s per subjects, along with green issues. Francis will hold a prayer service with migrants on Friday afternoon at the Holy Cross Catholic church in Nicosia, and plans to give a home to 50 asylum seekers in Vatican City when he leaves the island on Saturday.

“We are all brothers and sisters loved by a single Father,” he said.

“We need to work together to build a future worthy of humanity, to overcome divisions, to break down walls, to dream and work for unity.  We need to welcome and integrate one another, and to walk together as brothers and sisters, all of us,” he said.

After the service, the Pope went to the presidential palace to meet President Nicos Anastasiades where he continued the migrant theme, saying Cyprus would need to find a way to solve the crisis. “The pearl that is Cyprus is currently facing an uphill battle against the pandemic and the migratory wave,” the Pope said.

He said he had come to a country that was geographically small, but historically great; to an island that down the centuries has not isolated peoples but brought them together. “You are an open door, a harbour that unites,” he said.

The Pope said that many peoples and nations had contributed different shades and tints to the Cypriot people and compared it to the formation of a pearl that would take time and patience to shine.

“It demands a broad vision capable of embracing a variety of cultures and looking to the future with foresight. I think in this regard of the importance of protecting and supporting all the members of society, especially those who are statistically a minority,” he said.

At the same time, referring to Cyprus’ division, he said the “greatest wound suffered by this land has been the terrible laceration it has endured in recent decades”.

He said he thinks of the deep suffering of all those people unable to return to their homes and their places of worship and said he would pray for peace in Cyprus.

“The way of peace, which reconciles conflicts and regenerates the beauty of fraternity, has a single word as its signpost. That word is dialogue,” he said. “We know that it is no easy road; it is long and winding, but there is no other way to achieve reconciliation. Let us nurture hope by the power of gestures, rather than by gestures of power.”

The Pope said that when tempted to yield to discouragement, people should think of coming generations, who long to inherit a world of peace, cooperation and cohesiveness, not one marred by perennial rivalries and poisoned by unresolved disputes.

“For this, dialogue is necessary, to avoid the growth of suspicion and resentment,” he said. “Peace is not often achieved by great personalities, but by the daily determination of ordinary men and women.”

Welcoming the Pontiff, Anastasiades said Cyprus had always been a point of peaceful encounter between peoples and part of a wider geographical area, in which cultures and religions were in a constant dialectic relationship, interweaving a diverse and multicultural environment.

“At a time filled with challenges and various problems that plague mankind, your presence here today sends messages of inspiration, courage and hope,” the president said.

Referring to the Cyprus issue, he said the people of Cyprus were well aware of the pain of uprooting and becoming refugees from their ancestral homes but at the same time, bemoaned that the island was becoming a first country of destination in proportion to its population.  He thanked the Pope for his initiative to bring home 50 asylum seekers.

The Turkish Cypriot leader said this was yet another proof that the “Greek Cypriot administration” as he called the Republic of Cyprus, was using religious beliefs for its own gains.

“Cyprus has two peoples, not just the Christian Greek Cypriots, but the Muslim Turkish Cypriots as well, and I invited the Pope to visit the north, as the President of the state of Vatican and as spiritual leader of the Catholic world,” Tatar said.

On Friday, the Pontiff will first visit the Holy Archbishopric of Cyprus at 8.30am. From there he will make his way to the Apostle Varnavas Cathedral, before the Holy Mass at GSP Stadium in Nicosia, scheduled to take place at 10am.

Epic leads the way with most enticing holiday season deal